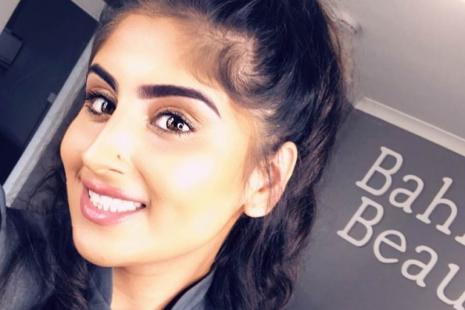 Shanan Bahia
Bahia Beauty
In a nutshell:
Cancer battle inspires teenager to achieve dream of owning her own beauty business

Thanks Coleg y Cymoedd for sharing this inspirational story.

A teenager from Hawthorn, who was motivated by her battle with cancer to pursue her dream of having her own beauty business, is celebrating one year of life as her own boss.

Shanan Bahia, now 24, was diagnosed with stage four Hodgkin Lymphoma aged just 18, forcing her to undergo emergency chemotherapy and leaving her bedridden for over a year.

The experience made Shanan reassess what she wanted from life and left her determined to get better and achieve her long-held ambition of setting up a salon of her own.

Now, Shanan is the proud owner of Bahia Beauty – a Pontypridd-based salon offering a range of beauty treatments from makeup and manicures, to facials and massage. The business continues to thrive, and Shanan hopes to grow it over the new few years.

Growing up amongst a family of entrepreneurs, Shanan knew from a young age that she wanted to own her own company one day. Having long had a passion for beauty, following her GCSEs, Shanan completed a Level 2 Beauty Therapy qualification at Coleg y Cymoedd.

While she subsequently started a Level 3, the lure of earning a salary was too much for Shanan and she decided to leave college to work full time in hospitality – a move she later came to regret. Just one year later, she received her diagnosis, which came as a huge shock as she had assumed her symptoms – weight loss and a cough - were a result of stress and being a little run down.

Due to the severity of her condition, with the cancer having spread to her lungs, spleen and liver, Shanan had to immediately start chemotherapy and made the heart-breaking decision to scrap plans to freeze her eggs – something she had hoped to do before undergoing treatment.

Over the next twelve months, instead of going out with friends and kickstarting her career like other teenagers her age, Shanan spent the majority of her time either bedbound or at hospital appointments. Shanan’s journey to recovery gave her the opportunity to rethink her career goals, leading her back towards her original passion: beauty therapy.

She said: “When I received my diagnosis, it felt like my whole world was put on pause, but I was determined not to let it beat me. As I grew from strength to strength, I knew that once I was better that I wanted to return to college to finish my qualifications and then set up a business.

“My illness made me realise just how precious life is, so I wanted to make sure that I made the most of every opportunity. Having my own beauty business had always been a dream and my diagnosis gave me the motivation I needed to reach for that goal.”

Once Shanan started to feel better, she decided to get some industry experience working for a supermarket nail bar and within a hotel spa. She then returned to Coleg y Cymoedd to complete her Level 3 Beauty Therapy qualification and was awarded ‘Student of the Year’ by the college for her perseverance and commitment to her studies.

Her success was followed by the opening of her very own beauty salon a year later, which is now celebrating its one-year anniversary.

Nicola Davies, Shanan’s Beauty Therapy lecturer at Coleg y Cymoedd, said: “Shanan displayed such a strong dedication to her course when she was here, despite the difficulties she faced with her cancer diagnosis. She was always back and forth to hospital while studying, but she was determined to gain her final qualification and didn’t let anything stop her.

“We are so proud of Shanan and everything she has achieved, from her studies to her very own business. She is an inspiration to many of us here at the college and it was an absolute joy being able to play a part in where she is today.”

While Bahia Beauty, like many other businesses, has been hard-hit by the effects of the pandemic, Shanan continues to serve a string of loyal clients.

Going forward, she hopes to help other young people and would like to set up an academy at the salon, providing certified training in a range of beauty therapies and treatments.