COVID-19: support for your business 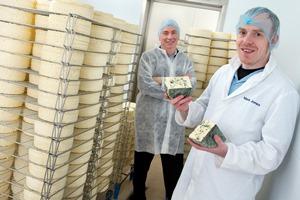 A new approach to portion cutting and packaging could save a famed Welsh cheese company £71,000 per year.

Business is booming for the Carmarthenshire Cheese Company. Since its inception in 2006, the business has grown from supplying artisan cheeses to local companies to providing quality products to major retailers around the UK and as far afield as America and the Far East. Once the company had outgrown its original premises, it turned to WRAP Cymru for a waste review before taking up residency elsewhere, to ensure its operations were as efficient as possible.

WRAP Cymru provided a cheese industry specialist to help identify areas of concern for the company, which had already noted an increase in the amount of cheese going to waste from off-cuts and overweighing, creating additional costs in wasted production and landfill charges. As the specialist discovered, this wastage was equal to £53,000 per year in costs for the period 2013/2014 alone. This sum would quickly rise to £109,000 per annum by 2015/2016, due to the company’s expansion.

To counteract these costs, the specialist suggested investing in a new type of cheese cutter, which would reduce the amount of cheese going to waste and save Carmarthenshire Cheese £71,000 in the year 2015/2016. The cutter will cost around £65,000, and a WRAP Cymru capital grant will help with this investment.

Furthermore, the specialist identified key areas around the company’s packaging operations which could be streamlined, and the business is now saving 4680 square metres of virgin plastic and 900 tray units per year, resulting in an additional £2,500 savings per annum. As the business continues to grow, so too will these savings. The company also benefits from improved green credentials, which are proving an increasingly important factor in consumer purchasing decisions.

Steve Peace, director of the Carmarthenshire Cheese Company, says that WRAP Cymru has been particularly sensitive to the needs of a business that’s otherwise busy booming: “One of the biggest benefits of working with WRAP Cymru and its appointed consultants is the initial speed of project approval from WRAP Cymru and the interpretation of our needs and issues, and timely project execution, by the consultant. Addressing these operational issues quickly is a great boost for a growing business that sometimes has no spare resources or expertise to address the problem.”