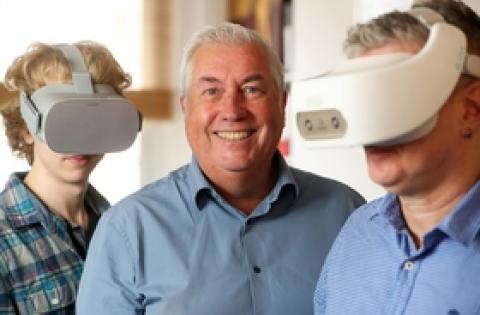 Atticus Digital, a BAFTA award winning creative agency in south Wales is looking to target international markets as part of its growth strategy.

A quarter of Atticus’ trade already comes from overseas but this figure is set to rise as the firm eyes exports as a way of achieving record breaking sales and turnover.

Cardiff-based Atticus Digital, which employs six people, works with companies to optimise their digital marketing strategies. The firm has been producing high quality creative content for more than 20 years and specialises in the creation of virtual reality and augmented reality.

In 2013, a boom in the digital market prompted the firm to expand its services to include VR, AR and 360˚ video production, opening up brand new possibilities for it to export worldwide.

Today, international sales make up around a quarter of Atticus’ sales and the company currently exports its services all over the world, with the USA, Singapore, Australia and the Middle East forming its largest markets.

Now Atticus is looking to place a drive on exports as part of its growth strategy and has set its sights on Japan as its next target market, thanks to a growing demand for VR and AR services in the region.

Atticus aims to double its turnover in the next five years and sees exporting as a key way of achieving this goal.

“Over the years we have developed our international order books and seen great results from these efforts. As a result, we are now looking to really push the export agenda and accelerate out international sales to help grow the business.

“There are plenty of opportunities for us to export our services. In particular, we are seeing growing demand for virtual reality in Japan and Singapore, with few companies producing content in VR and AR, especially for learning and development, so these countries are key targets for us.

“We are hoping to double our turnover in the next two years and exports will play a huge part in achieving this.”