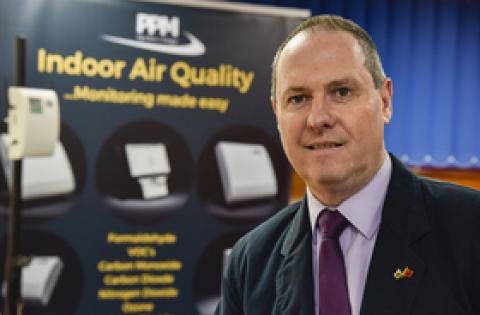 Award-winning company PPM Technology has carved out a strong international business for itself as one of only a handful of companies around the world that make monitoring equipment for formaldehyde and other toxic gases.

PPM Technology operates out of a single facility on the Cibyn Industrial Estate, Caernarfon, where it employs 12 staff.

The firm was originally set up in the early 1990s by Dr Tom Parry Jones, whose Lion Laboratories developed the world’s first electronic breathalyser. After a management buyout in 1999, the company – renamed PPM Technology – changed focus to exploit a newly emerging market for its products in Asia.

To reach this new market, PPM’s products first had to be adapted to meet both the stringent legislative requirements in Japan and to cope with the hot and humid conditions in the country. The monitors had to be made more sensitive, a process that took between three and four years.

Once this development had been completed, new markets quickly opened up for the firm, not just in Japan but also in China, South Korea, Taiwan, Malaysia and Hong Kong, leading to the company’s turnover rising from £150,000 at the time of the management buyout in 1999 to £515,000 in 2004.

The company also won Exporter of the Year at the Daily Post Business Awards in 2016 and managing director John Brinley Jones was named Gwynedd Businessman of the Year in the same year.

It was not all plain sailing though. PPM noticed that its numerous distributors in its biggest market, China, were competing against each other, pushing revenue and profit margins down. Changing tack, they dropped most of their distributors in favour of just two exclusive ones who are not allowed to tender to the same customer. Sales started climbing healthily again, breaking new records practically every year over the last decade.

Key to the company’s export growth, PPM has received a range of support from Welsh Government export specialists including participating in trade missions and attendance at key exhibitions, as well as general export advice.

Today, PPM Technology exports to over 40 countries in total. Thanks to its international focus, the firm Is now eyeing a record £1m turnover this year.

“We have seen great export success over the years, and these have played a crucial role in growing the company. We’re always improving our range. We work closely with distributors with knowledge of the market and the appropriate legislation,” he said.

“Welsh Government support has been vital in opening up new opportunities for us overseas. The trade missions are fantastic. I’ve been travelling the world for years, there’s nothing worse than travelling to a country you haven’t been by yourself. When you’re with a trade mission you meet so many people and companies, everything’s done for you.”