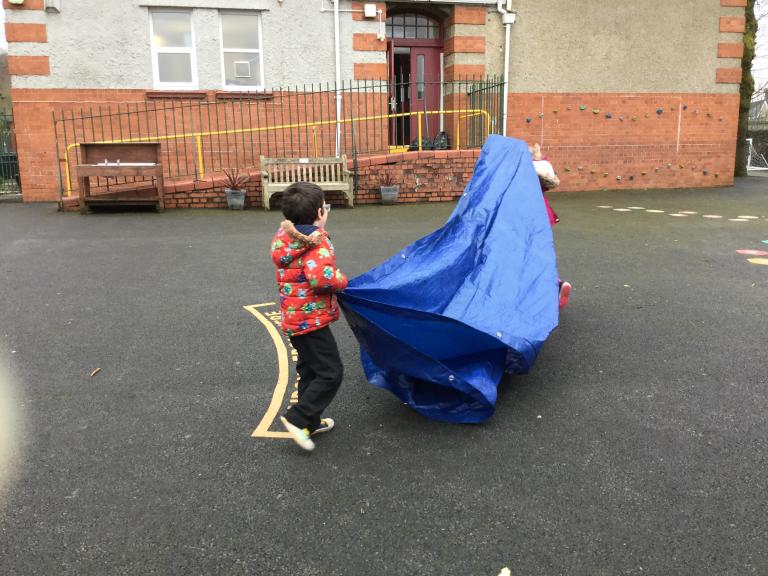 This project will help children and parents understand that play does not need to cost anything, can be undertaken rain or shine and doesn’t need to involve the use of screens!  Four Community Play Workers are being recruited to work with schools in order undertake a play improvement project.

The play workers will be supporting and extending children’s play by acting on cues to intervene with ideas, suggestions and support. They will encourage the safe use of equipment and loose parts (junk items used for play) and work with Play Heroes (children from years 5/6 appointed as play improvers) and within the local community to offer play sessions at outreach events to improve play understanding and uptake of play opportunities.

What will the project achieve?

The project aimed to employ qualified and experienced Community Play Workers (CPW) to work during school lunch times, ensuring that children had direct access to a play professional and would be able to experience good value play sessions. The CPW’s knowledge would be passed on to existing lunch time staff who, in turn, would gain a better understanding of play and its benefits.

Four schools were chosen to take part in this project.  The CPW’s also aimed to work within communities to share knowledge with groups/parents & carers.

A Play Toolkit, which included a training element, would be produced in order to share this scheme with other schools.

What was the result of your project?

Overall, this project gained a mixed response, each school had their own way of supporting the project and some were more engaged than others. The schools that were most communicative and willingly participated in the recruitment process seemed to benefit more from the project.  One of the schools wasn’t particularly engaged in the project and this proved challenging.

Two schools, in particular, benefited most from the project – they made an effort to support and engage with their Play Workers by including them in the day to day aspects of school life and making them feel part of the school team.
Involving the children in the recruitment process.  The PDO arranged for the children to be part of the interviewing process.  This promoted participation standards, where children have to be included in matters relating to them, which meant they had a voice in the final decision.

Play was supported/highlighted: Play within the schools was promoted and given a platform.

One Play Worker took on a role within another grant funded project as a Play Worker for 20 hours per week. One school was so impressed with the way children responded to their Play Worker, that the Play Worker has been offered a permanent role in the school.

Who were the Project Beneficiaries?

What were the main lessons learns from the project?

Extending the duration of the project to take into account time for recruitment and training would be a key consideration. We did not anticipate the length of time it takes from advertising the post to successful applicant being in post.

Putting together a more formal Contract of Engagement with the schools.  Some schools put in far more effort than others in terms of inclusion and commitment to their Play Worker.

What’s next for your project?

Unfortunately, the COVID19 situation has had a dramatic effect on the project. We had hoped to undertake up to an academic year of work in each school and local community, in doing this it was anticipated that children, parents and community groups would begin to value the play worker as an important member of the community- which in turn would improve the chance of the community or school taking ownership of the project in some way.

There is however some legacy to the project. The resources purchased will remain with the schools, and when possible, the PDO will return to undertake training with existing school staff to give them the understanding of play to be able to support it in the school as part of their existing roles.

We still plan to create a video showcasing how play can be an integral part of school life and to show schools the value of employing a play worker – this, however, cannot be undertaken until the restrictions around movement and contact, due to the pandemic, are relaxed.