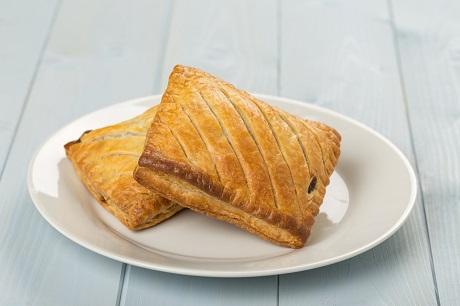 The Welsh Pantry is a medium-sized food manufacturer based in South Wales, with 92 people employed on-site in the manufacture of pasties, mince beef and savoury pies, curry slices and ready meals.  Products are supplied under private and branded labels to major retailers and wholesalers such as Morrison’s, Sainsbury’s and Aldi, and other retail outlets across Wales.

A WRAP Cymru waste review highlighted the amount of food waste being sent to landfill, primarily arising from unused pastry trimmings being generated by inadequate processing facilities.  Raw pastry was being landfilled at a rate of 500kg/day.

With WRAP Cymru’s support (this was both advisory and financial, but I’m not sure if we want to broadcast the latter?), the company invested in their own on-site pastry rework cold room, allowing them to re-use raw materials for inclusion in subsequent batches of pies and pastries.  Direct benefits of this included reduced disposal costs and, most importantly, the re-use of a valuable resource in the production process.

The Welsh Pantry has estimated that they have consequently prevented 125 tonnes of food waste being sent to landfill per annum, leading to a financial benefit of £161,000 with a rapid payback period on the £40,000 invested.