The concept of an ‘Internet of Things’ (commonly referred to as ‘IoT’) has been around since the 1980s. The basic idea is that all sorts of electronic devices can connect to the Internet to send and receive data. Uses are wide and varied, big and small, from connected fridges that track what you store inside them to wearable health monitors and supply chain inventory management.

However, IoT’s impact is also being felt in agriculture. This is especially true in Wales, where Coleg Glynllifon near Caernarfon is pioneering new countryside management techniques using low-cost digital sensor technology. Recent advances have produced small, battery-powered IoT devices that can operate remotely for months, sometimes years at a time. Crucially, these sensors can operate wirelessly, removing the need for cables.

This technology could be a game-changer for farming. For years, farmers have acted as manual data gatherers, assessing the state of their land, crops and livestock, and acting accordingly. But with increasingly chaotic weather patterns, plus the vagaries of disease and pests, traditional ways of working are proving to be inefficient and can rapidly devolve into crisis management if remedial measures aren’t implemented in time. 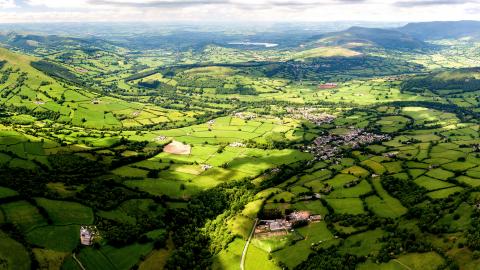 The perfect tool for the 21st century?

With a series of remote sensors, it’s suddenly possible to monitor various key elements of a farm remotely and automatically. As well as gathering basic information like temperature, rainfall and humidity readings, IoT technology can help measure livestock movement, water or slurry levels, pest infestation, soil content, even keep an eye on gates and the location of expensive farm equipment. Armed with this data, and the insights it can bring, farmers can immediately take the most effective steps to maintain efficiency and identify potential problems.

It sounds like the perfect tool to bring farming into the 21st century. So, why isn’t its adoption more widespread in Wales? According to Geraint Hughes, an agri-food consultant working with the Cymru Digital consortium, led by non-profit organisation Menter Môn, the key challenges that Wales faces are low awareness of IoT technology and a lack of information on how it can positively impact farming. He is working to change that.

“Information can often get muddled in the technicalities,” explains Hughes. “Farmers, like most business owners, want to know how [IoT] can help them and their business, not the internal workings of a node or gateway. You could argue that the challenge is greater with IoT due to the pace of change, and also that there’s an underlying fear of all things IT among some parts of the population.”

So, let's demystify things a little. Deploying IoT devices is straightforward and the underlying technology is relatively simple. The Farming Connect initiative – in conjunction with Cymru Digital – is trialing a number of LoRaWAN systems across Welsh farms. In simple terms, ‘LoRa’ refers to the ‘Long Range’ of the sensors used, while ‘WAN’ is the wireless ‘Wide Area Network’ they connect to. Each WAN ‘gateway’ (the equivalent of a Wi-Fi router) can serve a number of sensors, which can be as far away as 10km under the right conditions.

Each sensor gathers a specific type of information and sends small packets of data to the gateway, which in turn routes it to a dedicated network, where it can be collated, examined, and used to trigger other operations. Buttons and switches can detect if something has been pressed or if a door or gate is open or closed. Rotary sensors can sense how many times or how far they have been turned, while ultrasonic sensors can measure distance – the level of a slurry pit, for example, or the real-time height of a river.

“We’re delivering a contract for Farming Connect at the moment which involves installing 18 LoRaWAN gateways on demo farms right across Wales,” explains Geraint Hughes. “Each one will be connected to The Things Network, allowing anybody within its coverage to use the gateways. This is really cutting edge, and I think we’re the first to set up a coordinated network of rural gateways in the UK. It will open doors for many rural individuals and businesses who are interested in making use of IoT.”

The lack of long range, low power/long battery life devices has hampered the use of IoT in rural areas in the past, but with LoRaWAN those hurdles no longer exist. “The technology is also scalable and affordable,” Hughes adds. “Gateways are becoming more widespread that it will ultimately make the network more resilient – that is, you don't have to rely on one gateway. The network is also considered secure, and because it’s the most popular option and gaining more and more momentum, there are more sensor options out there.”

Indeed, once you have a LoRaWAN network in place, Hughes says that its uses are limited only by the sensors that are available and your own creativity. “Essentially, you have the gateway communicating with the sensors, and dumping raw data into a cloud-based database. It’s in the final software stage that the real magic happens... For example, you may have a motion sensor on a quad bike. However, you don't want to be alerted every time it moves. A simple piece of software can ensure you're only alerted if the bike is moved between 11pm and 5am.”

The benefits for farming seem obvious, but there are still many challenges ahead. “We don't really know which models work best yet,” admits Hughes. “Also cost can be a barrier if someone isn't clear about [IoT’s] uses and there are very few installers available with experience of deploying this technology.” 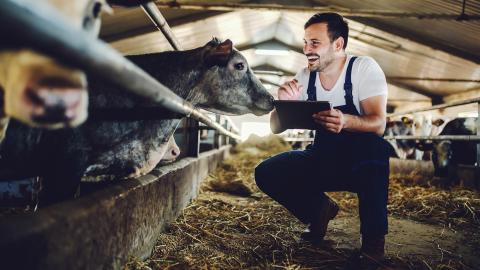 That said, things are changing and Hughes is adamant about the importance of IoT technology and its importance to business. To farming in particular... “In terms of agriculture in Wales, we are reliant on commodity markets,” he says. “To survive, we need a good brand to add value – Welsh Lamb, for example. Or we need to have a lower cost base and more efficient production systems, which is exactly where IoT comes in.

“What I would like to see is more encouragement and urgent support for businesses to develop the high value products in IoT, which is the software. Time is of the essence. In five years’ time, I would like to see a number of IoT apps being widely used on Welsh farms that have been run and developed by Welsh companies, and not the typical Silicon Valley disruptor. My second wish is for coordinated action to be taken now to ensure Welsh businesses retain control and ownership of their own data. This is going to be such a critical factor moving ahead.”

There are exciting opportunities here that can inspire Welsh businesses and Geraint Hughes is clear about the core benefits of using IoT technology for agriculture. “It boils down to cutting costs, adding value, improving quality, making things safer and making life easier.” And in today’s troubled times, farmers need all the help they can get.