A Swansea-based entrepreneur who has turned £25 into a £160,000 turnover business in eight years, has spoken about how digital technology saved his life.

Mark Watkins set up Designer Skins, which sells luxury new and used designer leather jackets online, in 2009 and is on course to double the turnover from last year. But the most important success story for Mark is how the internet helped him to overcome personal barriers. 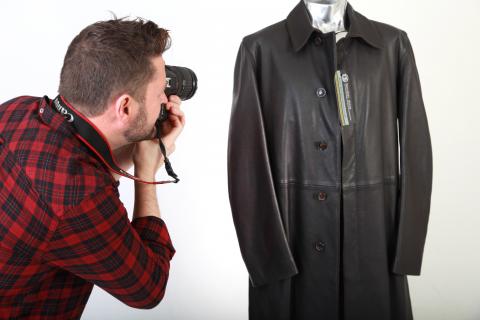 “I wouldn’t be where I am today without digital technology”

The 44-year-old had to give up his role as an engineer at Valeo in 2000 due to suffering from a panic disorder that left him housebound. But after completing online courses, learning three languages, publishing a book, and starting his own business, Mark has rediscovered his independence and admits he wouldn’t be where he is today without digital technology.

“It’s saved my life,” he said. “I was unable to leave my house and relied heavily on the internet. I learnt Italian, Spanish, and French and studied towards an online business degree from the University of Wales Trinity Saint David.

“I was keen to start my own business and found inspiration from a Canadian man who traded up from a paper clip and ended up with a house. I originally set out on my own challenge to go from a pony (£25) to a Porsche (£25,000). However, I very quickly identified there was a market for pre-loved high-end designer menswear so I switched my focus to this. Within six months I was turning over between £3,000 and £4,000 per month.

“Having a reliable internet connection has been a lifeline as I have been able to liaise with suppliers both internationally and in the UK via Skype. This meant I didn’t have to worry about my panic disorder as much because business was conducted over the web.

“The success I have achieved so far with my ecommerce business has enabled me to move out of my parents’ house and buy my own home, as well as purchase a car and start driving again. I am continuing to progress and every week I travel a little bit further as I slowly but surely overcome my panic disorder.”

Mark taught himself by accessing online resources and, as well as building his own website in 2016 to supplement his eBay store, he learnt about marketing, sales, and running a business. He also accessed one-to-one support from Superfast Business Wales.

He added: “The one-to-one sessions were fantastic as they provided confirmation that what I was doing was correct, and the advisor acted as an ideal sounding board and clarified and challenged my business strategy. In particular, I was keen to talk about social media plans and content as I will be carrying out Facebook advertising from January as part of my plans to grow the turnover to £250,000 within the next 3 years.

“Two thirds of my sales come via eBay and I will also be launching a new and improved website to try and switch the ratio around so that 70 to 80 per cent of my sales are direct via my site.”

“I still have time to do the things I enjoy”

Exploiting the digital infrastructure has also allowed Mark to maintain a healthy work/life balance, something that was high on his agenda when he started the business.

“I’m on the cloud so I can work anywhere at any time,” he said. “For example, I can reply to customers while watching television in the evenings, or import products while I’m waiting to play squash at the local leisure centre. I want the business to grow but I want to still be in control and keep my flexible lifestyle and still have time to do the things I enjoy.”

Book onto a free business workshop now or explore our Information Hub!