Edwards of Conwy and its sister brand The Traditional Welsh Sausage Company are now planning to expand its production space and add new products to its range as part of ambitious growth plans. 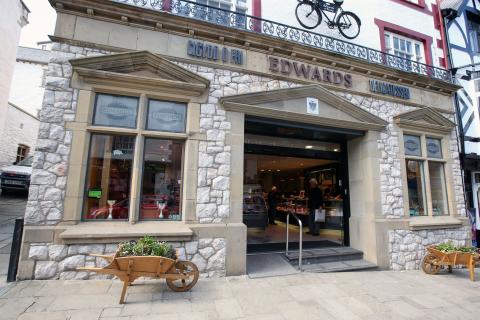 The company, which employs more than 60 people and supplies major UK supermarkets as well as sells directly to consumers via its high street shop, combined social media marketing, a bilingual TV advert, bus and billboard advertising, digital advertising, and traditional media relations for the campaign.

Edwards of Conwy, an award-winning high street butcher, opened in 1984, with The Welsh Sausage Company, which specialises in supplying supermarkets and foodservice, launched in 2004. It has won contracts with the Co-op and Dylan’s Restaurant in the last 18 months.

And the business is aiming for 20 per cent growth in the next 12 months, with social media set to play a key role.

Laura Baker, marketing manager, said: “We have ambitious plans to grow, and following on from our marketing campaign we have delivered growth in categories which are flat or in decline. For example, in one leading Welsh retailer, we have demonstrated growth within the declining sausage category.

“In total, our product range has won more than 200 awards, most notably 11 Great Taste Awards. We only use the highest quality ingredients and all our meat is fully traceable. We combine our traditional values with a forward-thinking approach to business and marketing.

“We are so busy that we need the bigger premises sooner rather than later. We recently sold a record 130,000 welsh beef burgers in a week and are selling between 1.5 and 2 million sausages a month.

“Social media is going to be key for us”

“The investment in the new product development and expansion in the production facility means we’re looking for a more cost-effective way of continuing the momentum and achieving our growth target of 20 per cent. And we believe social media is going to be key for us.

“On social media, more than half (58%) of 18-34 year olds and almost a third (31%) of over 55s are more likely to buy food and drink after seeing pictures on the likes of Facebook.

“We attended a Superfast Business Wales social media workshop, as well as receiving one-to-one advice to help with our online marketing strategy. The workshop was brilliant and very informative. We received lots of tips and tricks to implement, for example how to use Twitter lists, and have noticed an increase in engagement.

“The knowledge gained has allowed us to use social media in a more structured and meaningful way, which will continue to improve our brand awareness and drive more traffic to the site.”

“The course has helped me understand how to curate social media content in a more professional way. We will also be sharing more on LinkedIn to build relationships with key business people on the platform.

“We’re also hopeful that our digital activity will help increase footfall into the shop on the high street.”

To find out more about online technology and to access free digital business advice to grow your business click here.