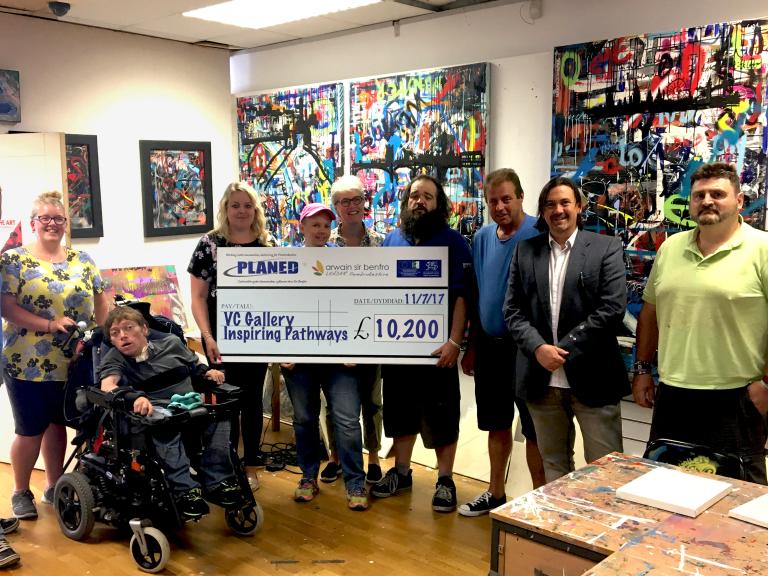 Inspiring Pathways was a 15-month project delivered by the Veteran & Community Gallery, founded in Haverfordwest, by Barry John MBE, after he left the Army in 2014. The VC Gallery uses art as a vehicle to combat social isolation and supports armed forces veterans and community members who have complex needs.

The project arose from an identified need to reduce social isolation in vulnerable people aged 55 and over. The VC Gallery wanted to expand from their base in Haverfordwest High Street and take their work out into local communities in different parts of the county.

Art sessions, including photography, poetry, painting and social ‘nostalgia walks’ were run in small peer-supported groups in eight communities around the county. People found their way to the sessions via the VC Gallery’s extensive network of referral organisations, word-of-mouth and wider publicity.

People came together socially, many of whom have complex needs, including PTSD, addictions and mental health issues. The therapeutic sessions had both creative and social aspects, and also introduced and referred beneficiaries to a wider network of support agencies.

In total 64 workshop sessions were run, with 200 beneficiaries, including people who had regularly made art during their lives, as well as those who hadn’t picked up a paintbrush since schooldays.

The project included people with dementia, some of whom who had ceased to communicate verbally, and were given a voice through their art.

The project has had therapeutic benefits for people, forming new social connections that help to reduce isolation, as well as providing a means for self-expression and creativity.

“Helping others, helps themselves. It’s empowering and increases confidence. We call it ‘stealth health"

“Being in a fun, sociable and relaxing environment helps to reduce anxiety and gives people a voice”.

During the project, the facilitators developed a new ‘mind map’ technique with people who have dementia, taking them on a virtual trip down memory lane, visiting somewhere they had lived in their younger days, using Google Maps street view. These virtual journeys around old neighbourhoods were simultaneously captured in abstract art that provided a legacy for the artists’ families.  This new approach was shared by the project at a national NHS Dementia conference and is now being used locally in dementia support services.

The success of the pilot project has enabled the VC Gallery to build their evidence base, develop ambassadors and demonstrate the success of their approach. This has led to new ideas and exploration of further funding opportunities, including the Enhancing Pembrokeshire grant scheme run by the county council. It has also put the project on the map in Haverfordwest, with increased support for its weekly