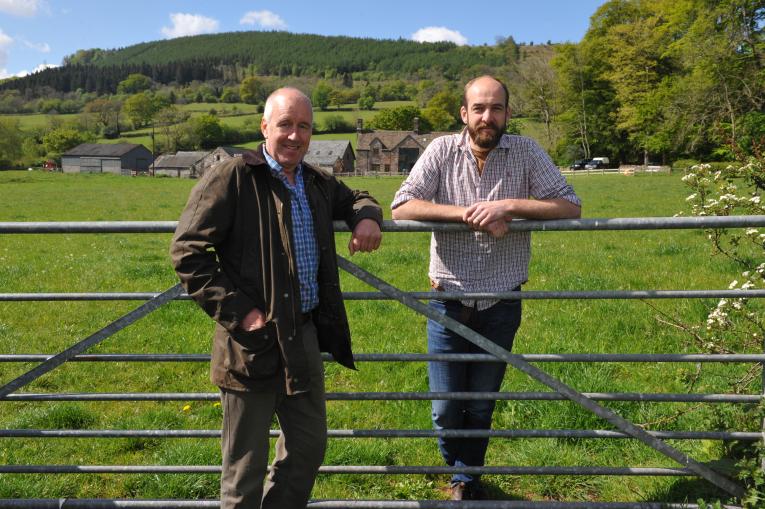 For Hugh and Sally Martineau, farming on the shores of Llangorse Lake near Brecon was an opportunity they had considered for some time.

However, as farming newcomers, they risked diving headfirst into the wrong system without the guidance of a Farming Connect mentor.

The couple had considered many farming systems that might be suitable on the land which had been in the ownership of Sally’s family since the mid-19th century - suckler beef, sheep, even deer.

Before selecting an appropriate livestock enterprise for them and the farm, Hugh first needed to think about pasture management in relation to stocking potential and environmental considerations.

In stepped Farming Connect Mentor Richard Roderick, a near neighbour and successful farmer with decades of experience in running an agricultural business.

As an eligible mentee, Hugh qualified for 22.5 hours of fully funded mentoring services and selected Richard as his mentor.

That was 2017 and, in the intervening two years, the pairing has allowed Hugh to evaluate and challenge his ideas about what farming system would work best.

Together Hugh and Richard discussed enterprise choices, including running a flock of Romney sheep, and visited farms with systems that might work for Hugh, who wanted to balance farming with his job as an agricultural consultant and his young family.

Richard has gained a wealth of knowledge as a Farming Connect Demonstration Farmer and through the Farming Connect Management Exchange Programme, an initiative which allowed him to investigate how to maximise utilisation of forage in suckler cow production.

As a Glastir farmer, Richard could point Hugh in the direction of the options most relevant to his land, such as using root crops as a reseeding tool. Hugh will grow four hectares annually over the next five years.

By reaching out to someone whose business and farming skills he admires and cultivating new ideas, Hugh says he could make some important decisions.

In a climate of uncertainty, he continues to assess potential investments in livestock. To meet Glastir management requirements, he is bringing in livestock on short-term grazing agreements and selling surplus forage while adopting the grassland improvement strategies and enhanced environmental management he discussed with Richard.

Hugh says his vision for the farming business is to create a system that fits around the environment of the farm, which is in a Nitrate Vulnerable Zone (NVZ).

“It is the right decision to observe how agricultural policy and market requirements evolve before making final decisions on the enterprise mix,’’ Hugh reflects.

“In the meantime we are getting the farm into the right shape for having sheep or cattle here in the future.’’

Tourism diversification is also an option – with Richard he explored opportunities for the land running down to Llangorse lake.

Hugh says it has been very beneficial having Richard as a mentor, not just for his technical expertise and shared experiences but his local knowledge, too.

“Richard is a good listener and has encouraged discussion and reflection,’’ he adds. “Being able to challenge your own assumptions about what you want is absolutely crucial to fully benefiting from a mentorship.’’

Richard has mentored many farmers and says it is a two-way benefit. “You learn from the people that you meet.’’

He says he is always open and honest about the mistakes he has made in his own system, to prevent mentees repeating those mistakes.

Even though the official mentoring period has ended, Richard and Hugh intend to stay in close contact.

“I enjoy sharing my experiences with other farmers. It is a privilege to go onto other farms to listen to and discuss the mentee’s future plans, it is great to see how the farmers I have worked with progress over time,’’ says Richard.

Farming Connect is delivered by Menter a Busnes and Lantra on behalf of Welsh Government and the European Agricultural Fund for Rural Development.