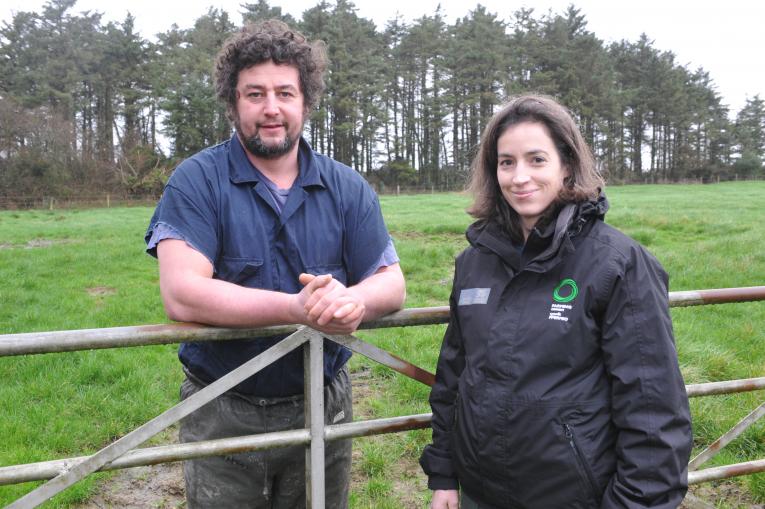 Simple and cost-effective changes to slurry and effluent controls have allowed a Pembrokeshire dairy farm to significantly reduce the volume of waste captured in its lagoon and to make better use of on-farm nutrients.

The Williams family embarked on a ‘stock check’ of existing storage capacity and infrastructure at 400-acre Trebover Farm near Fishguard.

Central to this was infrastructure advice on slurry and manure storage from Keith Owen, an independent buildings and environmental adviser, funded partly by Farming Connect.

Prior to this exercise, the Williams’ had anticipated that they would need to invest heavily in new storage facilities but Mr Owen instead recommended a series of measures to ease pressure on the existing underground store and to comply with proposed pollution directives.

Improvements included diverting dirty water away from the lagoon into a separate storage facility and fitting gutters and downspouts to buildings to prevent rainwater entering the lagoon.

This has spared the business the cost of major capital investment says Randal Williams, who farms with his father, Phil, trading as Parc y Morfa Farms Limited.

Although the changes cost in the region of £40,000, building a new store would have been more than double this, Mr Williams calculates.

“We needed good advice on the best way forward and were very pleased with the guidance we received, it has saved us a lot of money.

“By keeping as much clean water as possible out of the slurry system, the lagoon does not need to be emptied as often and the slurry is more valuable as a fertiliser.’’

Mr Williams, who supplies milk from his 220-cow herd to First Milk and is a member of its nutrient efficiency scheme, also received a Nutrient Management Plan (NMP) through Farming Connect’s Advisory Service – NMPs are fully funded for groups of three or more eligible farm businesses, or up to 80% funded on a one-to-one basis.

Soils in all his fields were sampled and this threw up some surprises.

“There was a field that gets no slurry or muck because it is steep, just an application of bagged fertiliser twice a year, but the P, K and pH were spot on,’’ says Mr Williams.

The NMP, carried out by Aled Roberts of ADAS, is helping him to better management his on-farm nutrients.

“We are now using the slurry when and where it is needed instead of just applying it to the land because the lagoon needs emptying and this means we are not applying as much bagged fertiliser.’’

Mr Williams’ message to other farmers is to make full use of the Farming Connect service,

“Seek the advice,’’ he says. “Getting the right advice has saved us thousands of pounds and has given us confidence that we are doing the right things with our slurry management.’’

“The support from Farming Connect is there to help farmers improve their businesses and make cost savings too,” she said.

“A farm business might be worried that they are going to have to make significant investment to comply with water quality requirements but that might not be the case.

“Having advice can help farmers make informed decisions that are sustainable for their businesses. Farmers don’t have to go it alone, there is a variety of support available to suit all sorts of situations. In particular, eligible farmers can access one-to-one on farm advice on nutrient management and infrastructure. They can access this information by speaking to their local Development Officer.”

Funding for the project has been provided by the Welsh Government’s Rural Communities Rural Development Programme 2014-2020.