A shared apprenticeship programme, Cyfle Building Skills, has demonstrated what can be achieved by operating an open and collaborative approach to apprenticeship training in the construction industry. The scheme began in 2007 as a partnership developed in the Carmarthenshire region and then progressed into the Cyfle Regional Model in August 2013, linked with five local authorities: Carmarthenshire, Ceredigion, Pembrokeshire, Swansea and Neath Port Talbot. Based in Ammanford, Cyfle Building Skills employs 135 shared apprentices throughout the South West Wales region, making it one of the largest employers of its kind in the UK.

Cyfle Building Skills works with a range of employers, allowing apprentices to move between companies of varying sizes which operate within different areas of the construction industry. Its frameworks cover bricklaying, carpentry, electrical, plastering, plumbing, maintenance and refurbishment, painting and decorating. The apprentices attend regional colleges while being offered practical work in various trades over two years.

This year, Cyfle Building Skills will be presented with the Queen’s Award for Enterprise: Innovation.The company is also proud of its diversity in the workplace. This includes young people with disabilities, members of the local travelling community and females - 10 per cent of its 2016 intake were female. To date it has worked with 140 contractors of different sizes in the region. 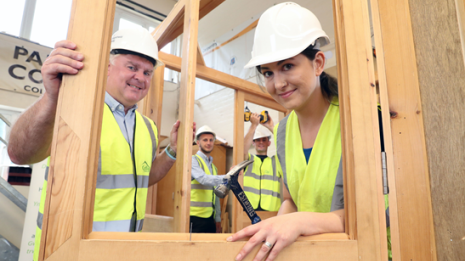 Medium Employer of the Year