More than 30 years’ experience in TV production was Sue Jeffries’ qualification for starting up her own training company specialising in apprenticeships in roles ranging from costume design to special effects.

As managing director of Sgil Cymru, embedded in the industry at its Pinewood Studios base in Rumney, Sue acts as lead assessor across three media apprenticeships at levels 3 and 4.

With her vast contacts book, Sue recruits industry experts as freelance assessors to deliver flexible training that meets the demands of television production across the BBC, ITV and other independent companies.

Instead of day-release college training, apprentices attend learning blocks at the studios, built around production schedules, and this is fast becoming the standard entry route into the creative industries.

Sue assesses in both English and Welsh and apprenticeships, through BBC Cymru Wales, have extended to radio, sport and a multiplatform option. Her recruitment workshop process to identify potential apprentices has been recognised by Creative Skillset as an example of best practice and Sue speaks at conferences and events to recruit the next generation of media professionals. 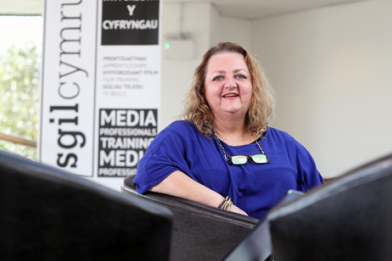 Work-Based Learning Assessor of the Year