Tregroes Waffles is a family run Bakery based in the Teifi Valley in South-West Wales. The company was created in 1983 as a way of generating an income for the owner and his family in an area with difficult and highly seasonal labour market conditions. The business initially traded its signature products, the waffles, through stalls at markets and fairs throughout Wales. 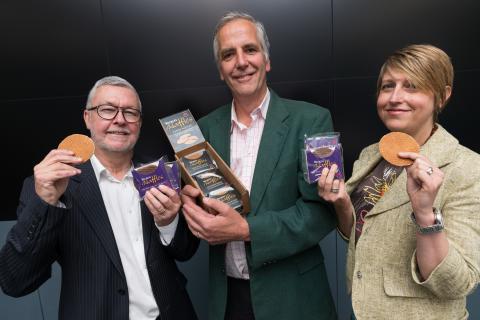 The business has grown exponentially to a situation where it now produces up to 4,000 Waffles per hour, and supplies most of the leading supermarkets as well as numerous independent delicatessens, coffee shops and cafés within the Welsh Borders and beyond. The company makes a healthy profit and employs 15 people. Recruiting locally, the business remains strongly embedded in the local community.

The owner of Tregroes Waffles began to explore the concept of Employee Ownership four or five years before the transition started taking place. He attended a breakfast seminar hosted by the Wales Co-operative Centre where he heard from a business owner who had successfully implemented a long-term transition of his business from a privately-owned model to a 100% employee owned model.

The owner contacted Social Business Wales who worked with him to examine the succession options open to him and to look at the best approaches for his longer-term aspirations. The Social Business Wales team helped develop the strategy and the new business models. They supported the business owner to set up an Employee Ownership Trust and worked with him on approaches to engage his employees in the processes and benefits of employee ownership.

At this point, the original owner retains 90% of shares and remains the Director of the company. He continues to enjoy the work and hasn’t reduced his workload or responsibilities to date. Recognising the fact, however, that he had invested his early entrepreneurial drive in the business, but was now possibly becoming too risk-averse, he felt that retaining sole ownership might hold the business back. He therefore decided to hand more responsibilities to the employees and to bring others with more energy and drive into more senior roles in the company.

Many successful businesses fail because succession is handled badly. This can lead to job losses, losing supplier contracts and even business closures. Social Business Wales has expertise in succession planning and guiding businesses through the employee buy-out process.