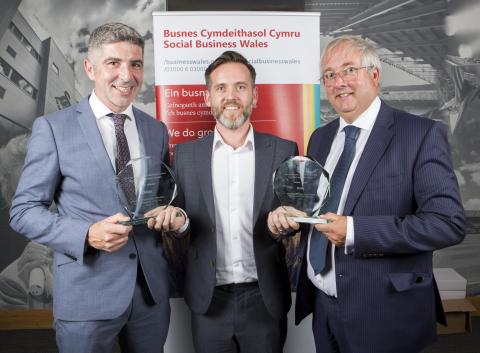 The names of this year’s winners for the Social Business Wales Awards have been announced.  The winners were revealed at a ceremony held at the Liberty Stadium in Swansea on 28 September 2016 in front of an invited audience of VIP guests from the social business sector.

Environmental co-operative Dulas has been named as Social Enterprise of the Year 2016. Dulas delivers cutting-edge, renewable energy solutions to businesses, landowners and charities. From its base in Machynlleth, it provides the consultation and mechanical innovation that its clients need to go green. An international leader in its field, Dulas has a hugely diverse portfolio of projects which integrate science, technology and environmental sustainability. The award, which was sponsored by BIC Innovation, recognised Dulas as an organisation which demonstrated excellent vision; a high degree of customer satisfaction; social, environmental and community impact; creativity and innovation; as well as a vision for future growth.

Dulas also picked up the Award for Social Enterprises in the Environmental Sector, sponsored by legal firm Acuity.

The One to Watch category, sponsored by Landsker Business Solutions, was won by Creating Enterprise CIC, a social enterprise which provides a range of maintenance services to social and private landlords. This ground-breaking initiative came about from a need at housing association Cartrefi Conwy to maintain its properties to an excellent standard, whilst providing skills, training and employment opportunities to its unemployed tenants and the wider community. An exciting and innovative element of the company is offering an employment academy which offers 12 months paid employment, training and support into other employment to social housing tenants.

A number of other awards recognised social business exemplars within specific sectors.

The Culture and Leisure Award, sponsored by Charity Bank, was won by Torfaen Leisure Trust. The Trust manages five leisure and fitness facilities across Torfaen, including swimming pools, sports halls, climbing centres and ski slopes. This service is especially vital in Torfaen where 60% of the population are overweight or obese compared to 55% across all Wales.  The Trust employs 110 full-time equivalent staff, rising to 400 with seasonal staff, and since it took over the service, has significantly exceeded its income targets. Most importantly, it has seen a 27% rise in physical activity visits to just over a million per year.

The Award for Social Enterprises in the Health and Social Care Sector, sponsored by Legal & General, was won by CAIS Social Enterprises Limited, an organisation which provides support, training and work experience to people coping with mental health problems or a history of substance misuse issues. Its three thriving social enterprises include a coffee shop and bistro; a café aimed at ex-servicemen; and a business centre with meeting rooms. Through these businesses, CAIS has provided essential training, qualifications and work experience within the catering and hospitality sector to more than 45 people in the last year.

The Award for Social Enterprises in the Education, Training and Employment Sector, sponsored by NatWest, was won by Cycle Training Wales, Wales’s leading provider of cycle training services. Established in 2008 by Andrew Burns and Nicholas Grant-Canham, it promotes well-being and the environmental benefits of cycling. Its social impact has been tremendous - giving skills to thousands of children and adults to make cycling part of their everyday travel; delivering bike maintenance sessions in low income areas; offering refurbished bicycles at an affordable rate; and enabling people (often long-term unemployed) to learn new skills and gain work experience.

The Market Hall Cinema in Brynmawr - Wales’s oldest cinema and the only cinema in Blaenau Gwent – was the winner of the Consumer Facing Social Enterprise Award, sponsored by Hugh James.  The cinema became a community-owned venue in 2013, and from the start was determined to be self-sustainable, with a clear focus on selling ‘seats and sweets’.  This simple proposition, couple with drive and ambition, has seen turnover increase by more than 600% since becoming community owned, and the cinema now provides a valuable, accessible and diverse service to its community.

Organised by the Social Business Wales project, which is delivered by the Wales Co-operative Centre, the Awards are mainly funded by the European Regional Development Fund and Welsh Government. This year, the Award categories have been sponsored by Acuity, BIC Innovation, Charity Bank, Hugh James, Landsker Business Solutions, Legal & General and NatWest, with additional support from the WCVA.

All six winners will now go forward to compete with their counterparts from Scotland, England and Northern Ireland at a UK Awards ceremony being held in central London in November.