A business owner who moved from Cardiff to Llantwit Major for a more rural setting is thriving despite initial worries that he would not be able to access a strong and reliable internet connection – a key component for his business to be successful.

Darren Witts, who runs graphic design company Treganna Design, requires fast internet speeds to share large graphic files with clients. And not only has he achieved his goal for a better work-life balance, he has maximised his digital connectivity with engaging use of social media to win six new clients. 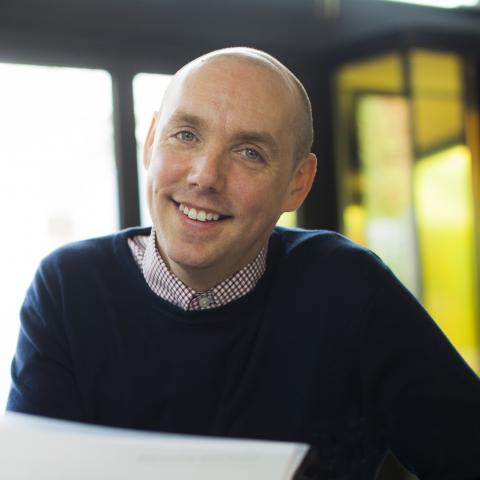 Darren previously lived in the city centre, but now enjoys a less fast pace of life in a rural setting. Walking the dog in the nearby fields and along the coastal paths, as well as running around the surrounding areas, are now part of his daily work routine.

The business has enjoyed a fruitful start to life in the town thanks to Darren’s clever approach to Twitter. In addition to new contract wins, he has noticed a 23% increase in visitors to his website, which he hopes will lead to further enquiries.

He said: “It covered everything from the dos and don’ts to more strategic elements including the best time to publish content and what works well. For example, tweets with images get 150% more retweets than those without so I try and use as many visuals as possible.

“My line of work relies on having a fast internet connection to download and upload very large file sizes to and from the cloud. I had big concerns that the broadband speed would slow me down and that fibre would be too expensive. I invested in fibre broadband, which was cost-effective, about £30 per month, and already available in the area, and haven’t looked back.

“I have so much more confidence when it comes to social media.

I’m now also working closely with organisations in the area to support them with their social media. I’ve even created and now manage a Twitter account, @LovingLlantwit, which supports and celebrates businesses and events going on in the town.”

The availability of superfast broadband has grown in Wales, with more than eight out of 10 premises now able to access it, compared with just over half in 2014. The Welsh Government also runs a voucher scheme for businesses, giving them the option of accessing ultrafast speeds.

The contract wins have included branding for start-ups and web design for established organisations, and Darren integrates his online and offline sales and marketing activity including networking and memberships to boost results.

He added: “Tagging people in posts increases engagement, so when I attend a networking event I always tag the organisers in my content and use relevant hashtags. Including a hashtag means the content is 33% more likely to be retweeted. From this I notice an increase in followers and website traffic. One thing on social media can snowball to open up new opportunities so having reliable Wi-Fi and learning more about social media has been crucial to growing the business here.

“There has been a 23% increase in traffic to the website. I check on my Google Analytics every few days to check where visitors have come from, and there is usually a correlation between marketing activity and visits to the site.”

To find out more about online technology and to access free digital business advice to grow your business click here.