Think Air has a bold plan to monitor the air quality across the whole of Wales. It will only be possible with Internet of Things technology.

Air pollution continues to be a major health hazard across the globe, but before the problem can be tackled, it needs to be measured accurately and fully understood. It’s a huge challenge just to monitor the air quality across a single city, but the ambitious Think Air project wants to extend pollution-monitoring coverage to the whole of Wales.

Think Air is a joint environmental venture between established technology provider Vindico and Professor Paul Lewis, director for the Centre for Health and Environmental Research & Innovation at Swansea University and an adviser to the Welsh Government on air quality.

“We want to make the latest technology in air quality accessible, affordable and easy to understand,” says Jo Polson, co-founder and managing director of Vindico. “For two years we’ve been developing our sensor technology, led by Professor Paul Lewis. He specialises in the effects of pollutants on respiratory health, large-scale analytics, and the development of novel sensor technologies for pollutant monitoring. We’ve taken Paul’s expertise and experience and added our own brand of innovation to create a platform that we believe stands alone in the current market.”

Polson admits that the task is a huge one. It begins with measuring the amount of air pollution, then raising awareness before choosing the right course of action. “We're also aware that it's probably not our generation that will solve all these problems. This led us to produce our ‘Create your own’ air sensor kits for primary schools in Wales, which we plan to roll out later this year. The sooner we start raising awareness, the quicker we can start influencing behaviour, which in turn will lead to better understanding and new solutions.”

It’s easy to be blasé about air pollution. It’s effects aren’t immediately tangible and we don’t often get notices about poor air quality. But even in Wales, it’s an increasingly serious issue. “Air pollution has both short term and long term effects on health,” warns Polson. “Pollutants come from sources such as transport, and include fine particulates and nitrogen dioxide. These pollutants, according to Public Health Wales, cause around 1,500-2,000 early deaths [each year]. Exposure to these pollutants also leads to increases in hospital admissions for vulnerable people such as those with respiratory or cardiovascular disease.”

Polson explains that air quality is currently monitored by the Welsh Government and local authorities. However, due to EU regulations, there are only a handful of appropriate air quality monitors in Wales, which tend to be situated in major urban areas such as Cardiff, Swansea and Newport. The data generated from these monitors is primarily used for reporting through the Welsh Government to the UK Government on an annual basis. Nitrogen dioxide is measured by local authorities on a monthly basis, but only if there is an expected excess of the gas. As a consequence, much of Wales does not have any air pollution data available to the public.

To alleviate the gaps in coverage, Think Air is proposing an air quality sensor network that can provide live local data to the general public. “Only then,” says Polson, “can the public – who themselves are major polluters – change their behaviour to reduce the levels of air pollution around them and reduce their exposure. The real solution to reducing air pollution is behavioural change.”

A key component of the project are the small, low-cost sensors needed to capture the air quality data. These sensors measure particulates (such as dust, pollen, soot, smoke and liquid droplets), as well as nitrogen oxides, temperature and humidity.

“Mainstream particulate sensors will undoubtedly be laser based,” explains Polson, “and research is already showing that this type of sensor is reliable and cost-effective. Nitrogen dioxide sensors that rely on a chemical reaction to detect the gas are currently the accepted ‘norm’ but new technologies, such as printed graphene-based sensors, are showing promise. Therefore, we have evaluated laser-based particulate sensors and chemical nitrogen dioxide sensors as our technologies as a first step in current installations, while currently evaluating promising graphene sensors as a next phase.” 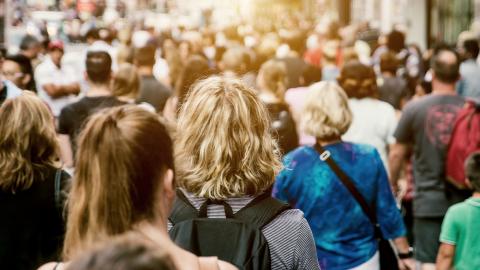 Looking to the future of IoT

An important aspect of these laser and chemical sensors are their reliability and low power consumption, which means they can run for long periods of time, either on batteries or using solar power. They can also be produced in large quantities, which makes them low-cost and easier to source. These sensors will ultimately be deployed in an Internet of Things (IoT) network, providing continuous air quality monitoring.

“IoT allows potentially any sensor to be used by many companies and industries depending on their needs,” states Polson. “The continuous data generated by sensors can be bespoke for a single purpose or their data pooled to become part of a larger and more complicated equation. This sounds wonderfully messy, so in simpler terms we can learn, in near-real time, information about things happening around us to make swift and correct decisions.”

Crucially, it’s just the tip of the IoT iceberg. “The same sensor network we’ve created could be reading a river level,” says Polson, “the light coming in a window or the weight of waste in a park bin, pushing all this information into a single platform and database for use with other systems, problems or solutions. That’s where we believe the future of IoT is heading, not one company making sensors that do one thing on one network, but an ecosystem where all sensor data can be collated to add as much relevant understanding to questions we have, producing better answers.”

Ultimately, Think Air aims to provide network coverage for the entirety of Wales, which Polson believes could be achieved within five years. “This might sound bold,” he admits, “and the obvious bottleneck is the level of engagement we can achieve with regional and local authorities. But we are confident that by understanding how the way we live our lives impacts upon the air we breathe, increased awareness will drive change at every level.”

Discover more about the Think Air initiative in Wales here.