“We are the cider-makers!” Seidr Pisgah Chi (Your Pisgah Cider) given a head start, thanks to support from Agrisgôp 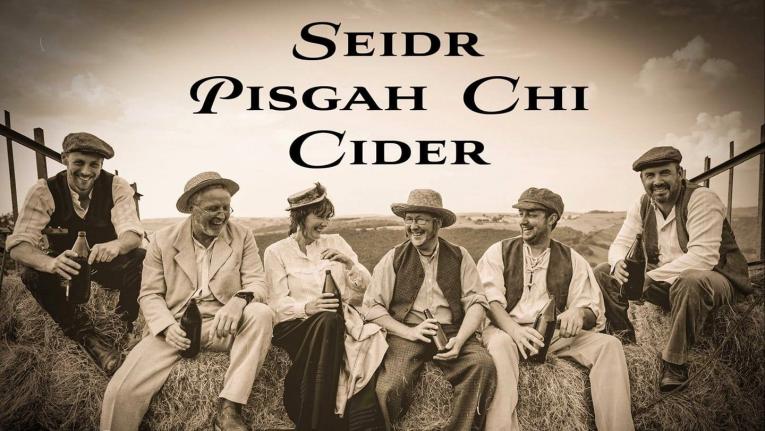 For a small group of entrepreneurial farmers who live near Pisgah, a tiny village in North Ceredigion, the sight of thousands of unpicked or windfall apples in local gardens at the end of every summer presented the perfect opportunity to set up a new self-financing eco-friendly business.

The group organised its first major collection of apples in late summer 2020, which they then pressed into 1,000 bottles of ‘Seidr Pisgah Chi’, a traditional dry cider that completely sold out within just two weeks last year. Last summer’s apples were picked in September, and are now fermenting in 30-litre barrels, in readiness for bottling this spring, and more apple trees and orchards have been planted, ready for the coming summer’s crop.

“Excitingly, this is a business ripe for further growth and development,” says Elen Pencwm, who supported the budding entrepreneurs through her role as a Farming Connect Agrisgôp leader. Agrisgôp is one of Farming Connect’s most successful personal development programmes, which brings together like-minded farmers and foresters to progress business ideas. Farming Connect is delivered by Menter a Busnes and Lantra Wales, and funded by the Welsh Government and the European Agricultural Fund for Rural Development.

In early 2019, two farming brothers, Sion and Rhodri Davies, had begun to sound out some of their farming friends and neighbours about finding a new common interest, or setting up a new venture. The group of five would often meet up in the local pub, and the conversation would inevitably turn to what they could do. They all wanted to put their energies into a project that would excite and challenge them – something that would enable each of them to play to their own strengths, yet provide the opportunity to learn new skills, too.

“We originally thought that just enjoying the experience of working together with a common aim would be sufficient reward, but thanks to Agrisgôp, considerable support from Aberystwyth University and an expanding number of loyal customers, we can all see the potential for growth, which in itself is spurring us on,” says group member Dilwyn Williams – who, when he’s not tending to the sheep on his local smallholding, is a skilled bookbinder with the National Library of Wales.

Elen knew most of the group members already, and as they were all registered with Farming Connect, she offered to set them up in a new Agrisgôp group in the summer of June 2019. She encouraged them to talk openly and honestly about their goals, and after sifting through a raft of ideas, the five farmers’ clear enthusiasm for the cider-making venture was unanimous.

The group met face to face quite a few times, before the pandemic restrictions forced them to switch to online meetings. Elen invited a number of specialist speakers to give them advice on issues, including picking and processing the apples, bottling, branding and social media marketing.

She also introduced them to Chris Charters, chair of the Welsh Cider & Perry Society, as well as plant breeder and geneticist Dr Danny Thorogood from Aberystwyth University’s Institute of Biological, Environmental and Rural Science (IBERS). Dr Thorogood recently established a new heritage orchard set-up at the University’s Gogerddan campus, which will protect more than 60 rare fruits from extinction.

“Meeting Dr Thorogood and learning that as a community-based project, we could utilise the fruit-crushing and pressing facilities through the university’s Beacon Wales project until we were ready to invest in our own equipment, inspired us all,” said Mr Williams.

By autumn 2020, all five members had sought permission from the numerous growers where they had spotted unused apples; had devised a rota of ‘who goes where’, and were ready to spend a designated weekend picking and collecting the fruit.

“Although we have all got busy lives, we worked like trojans all that weekend, piling thousands of apples into crates, boxes and any large containers we could get our hands on, before we set off for Gogerddan early the following Monday in a convoy of vans, pick-up trucks, tractors and trailers – whatever means we had, basically!

“Encouraged by supportive family members and Elen Pencwm, who has been amazing every step of the way, the weekend included a lot of thermos flasks, sandwiches and cake – and we all agreed we’d had the most fun and camaraderie we had experienced in years,” said Dilwyn.

Under the watchful eye of the Gogerddan experts, the group learned how to process, rack and bottle their new artisan cider. They also applied for an all-important alcohol licence.

By Christmas, they were ready to target pubs and restaurants, as well as locals keen to sample the new beverage.

Thanks to Elen, they had their ‘Pisgah Seidr Chi’ social media channels up and running ready to capitalise on the Christmas trade, and a professional photograph of the ‘famous five’, decked out in ‘turn of the century’ farm attire on the labels, touched a chord with delighted buyers.

“Elen supported us throughout our entire journey, and was there to help us celebrate when we sold out - 1,000 bottles in just two weeks - from a pop-up gazebo in The Halfway pub car park, where the whole plan began.”

So, what next for this enterprising gang?

“We are all determined to build on our success to date by sourcing more apples, making more cider and taking more orders!”