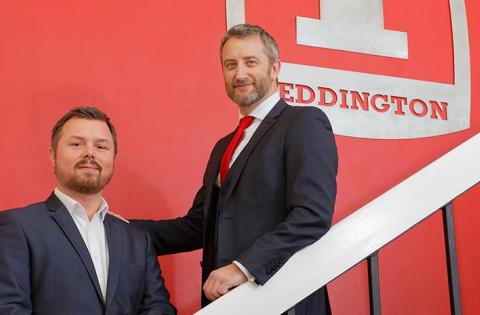 Teddington Engineered Solutions, a West-Wales engineering business which originally supplied parts that kept the RAF’s Spitfires in the air during World War 2, targeted international markets as part of its growth strategy.

Now, more than 66% of Teddington’s trade comes from overseas, helping the firm to achieve record breaking sales and turnover.

Llanelli-based Teddington Engineered Solutions, which employs over 100 people, designs and manufactures expansion joints for a range of industries including aerospace, marine, construction, nuclear power and defence. The joints compensate movement in pipe work caused by temperature change, pressure or vibration.

Established in the 1920s in Teddington, the south west London district from which it takes its name, the firm originally supplied its patented bellows to the aircraft industry.

During the early war years, Teddington was responsible for making critical components for British aircraft such as the Spitfire, and it was this crucial role that prompted the Government to move the company away from London to South Wales, where it was thought it would be relatively safe from German bombs.

After the war, Teddington diversified into a range of other markets including the energy sector, opening new doors for it to sell its expansion joints all around the world.

Today, international sales make up 66% of Teddington’s orders, with the company having exported to more than 90 countries since 2003. While around 7% of sales are still in aerospace, more than 30% are now in energy, with the remainder in marine applications, the liquefied natural gas market and steel plants among others.

China and the Middle East are among the firm’s largest markets outside the E.U. Teddington was the first company to supply bellows for the LNG tankers that are currently being built in China and is also a key supplier to the nuclear industry in the country.

In the Middle East, Teddington has been involved in some very prestigious projects. In Dubai alone, the firm has supplied Dubai airport, the metro system, the Burj Khalifa, the Dubai Mall and many of the buildings on Palm Jumeirah.

It is Teddington’s firm focus on international trade that has resulted in Teddington achieving an 18% growth in its turnover in the last two years alone. The firm has also boosted its team by around 30% since 2014 thanks to export sales.

“Our order book has increased significantly over the last two years, so much so that it reached a record high recently. It’s all down to exports, winning contracts with new clients.

“We’ve been trying for many years to get into a specialised steel making industry called Direct Iron Reduction, so doing so is a real breakthrough for us. We’ve already supplied three contracts since April last year and have been assured that we are the preferred bidder for future contracts.

“For the past fifteen years, we have utilised the Welsh Government with its many options of support including trade missions, exhibitions, trade opportunities in market support, and general export advice from extremely knowledgeable and experienced people within the export team. This has without doubt accelerated our export growth over the years, which would not have been possible without this support. For this we are extremely grateful.”