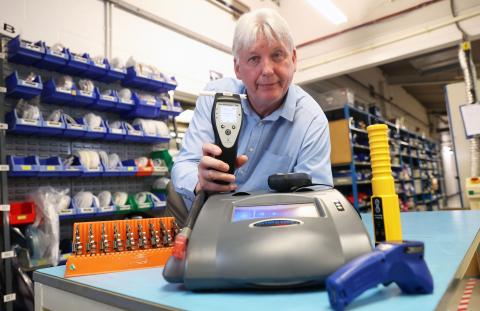 Barry-based Lion Laboratories is the company behind the world’s first ever electronic breathalyser, which was invented by its founder, Welsh scientist Dr Tom Parry Jones, in 1967.

Today, Lion Laboratories is a global leader in the supply of electronic breathalysing devices, which are manufactured by hand on-site at its Welsh headquarters. The company’s products are used by police forces all over the world including the UK, Denmark, Malaysia, Thailand, Oman, Switzerland, Namibia and Australia.

International sales currently account for 70% of Lion Laboratories’ trade, with the firm exporting to over seventy countries across Europe, Asia, America, Africa and Australia.

It is now working to secure new overseas contracts as part of its business growth strategy which includes increasing its export sales back up to pre-pandemic levels of 85% of turnover.

Most recently, Lion laboratories has secured a contract worth over £1m to supply hundreds of portable infrared breath testing instruments to the Finnish Government for use by Finland’s police, border guard and prison services.

In the last 12 months, the company has also appointed new distributors in France, Spain and Austria as part of ambitions to grow its presence in Europe.

France is a key target market for the firm, which has established itself as a leading supplier of alcohol ignition interlock devices for the country’s PJL Offender Programme - a French Government scheme for drink driving offenders.

As part of the programme, the French courts can impose an alcohol ignition interlock – a breathalyser fitted into a vehicle system which blocks individuals from driving unless they provide an appropriate alcohol breath sample - as an alternative to a driving licence suspension.

Since it was established, Lion Laboratories has helped to revolutionise road safety and has grown to become a global expert in the field of alcohol in breath analysis with its range of instruments helping to prosecute millions of drink drivers worldwide.
One of the key drivers behind the company’s success and export growth over the last ten years has been support from the Welsh Government, which has provided comprehensive market research into new territories and assisted the company in attending trade missions.

Martin Slade, Head of Sales at Lion Laboratories, said: “Exporting is extremely important to us, both in terms of our security and growth. It ensures that we are not purely reliant on one market and, by covering a wide range of countries, broadens our business opportunities and protects us in the case of any regional dips.

“The Welsh Government has been extremely supportive in helping us to make key contacts overseas that have directly led to new business. They have helped us to attend trade shows to network and communicate with potential clients and distributors, supported us to reach out to British embassies overseas, and have introduced us to connections in a number of regions including Germany, Austria and Spain, which have resulted in the establishment of new routes to market.

“During his visit to Wales in December 2021, the Hungarian Ambassador visited Lion Laboratories at our facility in Barry. This was organised and arranged by the Welsh Government and has opened up talks for potential business there also.”