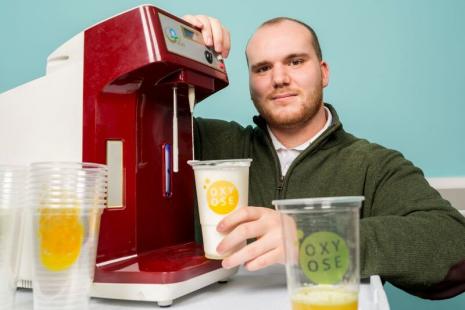 Jackson Pickard
OxyOse
In a nutshell:
A Swansea university student and serial entrepreneur is set to make waves in the drinks industry following the development of a healthy beverage which combines fruit juice with pure oxygen.
Sectors:
Food and Drink
Region:
Swansea

A Swansea university student and serial entrepreneur is set to make waves in the drinks industry following the development of a healthy beverage which combines fruit juice with pure oxygen.

The concept behind OxyOse was initially devised by Jackson’s business partner Julieta Ose Ahmedze, 21, back when the pair were 18 years old.

The idea had never before been developed commercially in the UK and the duo were keen to explore its potential. Jackson ordered a specialist mixing machine which froths fruit juice and injects pure oxygen into the mixture. The result is a low calorie fruit juice energy drink that doesn’t lose flavour and is ideal when consumed before exercising. Jackson had demonstrated his entrepreneurial flair from a young age, creating an on-the-go food and drinks shop at his secondary school during lunch breaks and even developing a clothing line at 17 years old with a friend.

Jackson now balances his university studies in Business Management with managing the development of OxyOse. Currently the pair are looking to franchise OxyOse within health cafes and gyms across the country.

Following the development of OxyOse Jackson and Julieta have been travelling the length and breadth of the country raising the profile of the brand and hosting pop-up stalls at large business events for the likes of Barclays, PwC and the Financial Times.

Jackson and his business partner have even set up links with a business associate in Bulgaria, who is managing events and sales of OxyOse overseas.

Jackson said: “Throughout our time growing OxyOse, we’ve been lucky enough to win start-up funding and secured a loan which has allowed us to invest money into equipment and develop our brand.

“We’re also busy exploring the science behind the drink and looking into whether we could bottle OxyOse, which is the ultimate goal. But for the time being, our focus will be on franchising to health bars and popular gyms like Easy Gym or David Lloyd.”

During Fresher’s Week, Jackson was put in touch with Dave Bolton, Swansea University’s Enterprise Champion who introduced him to the services on offer from Big Ideas Wales, including the annual Bootcamp to Business event.

Jackson said: “Bootcamp to Business was by far one of the best things I was involved in last year. I’ve been able to build a real network here in Swansea and the wider area and it’s clear to me that Wales is a really nurturing environment for young entrepreneurs like myself. There’s a lot of support on offer.”

Seeing an opportunity to expand his entrepreneurship network still further, Jackson set up Swansea University’s first Entrepreneurship Society, a group which encourages students to follow their business ambitions. With the support of Big Ideas Wales and Santander Universities who both attended the launch event, the society will now offer its members weekly initiatives including external speakers and workshop events, many of which will be hosted by Big Ideas Wales Role Models – successful businesspeople who actively mentor young entrepreneurs.

Despite juggling OxyOse, his studies and the Entrepreneurship Society, Jackson is continuing to develop two app ideas – one for the security industry and one social networking site, both currently in their infancy.

Dave Bolton, Swansea University’s Enterprise Champion who has guided Jackson from their first meeting, said: “Jackson typifies the driven, innovative young people who Big Ideas Wales are proud to support. His initiative is above and beyond your average 20-year old, from developing new business ideas to creating entrepreneurship societies. Jackson is a great role model to his fellow students and young entrepreneurs. We are all excited to see his businesses evolve and grow.”