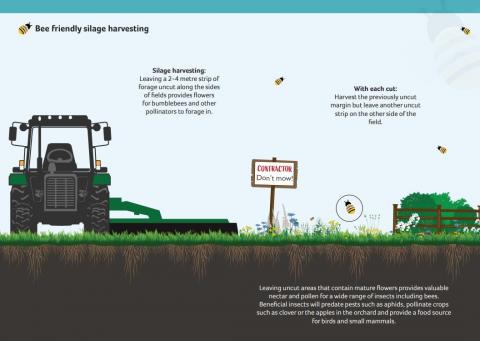 The dwindling population of wild bees and other pollinators in the UK poses a serious threat to the UK food industry. These little insects play a huge role in UK agriculture by pollinating the many vegetables and fruits we eat on a daily basis, as well as some of the food our livestock depend on.

Six dairy farmers who are members of the Calon Wen Milk Co-operative undertook a 3 year project to see if some simple interventions could boost pollinator numbers on their farms. Their organic farms already provided suitable habitats for bumblebees and other pollinators but they still wanted to see if more could be done.

The project focused on the inclusion of a multi-species ley that included bird’s-foot trefoil, clovers (red, white, sweet and alsike) and yarrow as well as ryegrass.

In fields that were used for grazing or cutting, strips of these multi-species leys were left uncut or ungrazed to allow the flowers to provide a succession of forage for the pollinating insects. This boosted bumblebee numbers dramatically with little impact on the productivity of the field. The next time that field was cut or grazed these strips would be utilised and a new strip left to provide the continuous supply of flowers for the bees.

Each farm was surveyed and advice provided on areas that could be adapted to provide pollinator habitat. This included suggestions such as managing hedgerows by cutting them less often to allow them to flower in the spring and allowing weed species such as knapweed and bird’s foot trefoil to grow on tracksides.

The farmers, together with representatives from the Bumblebee Conservation Trust and RSPB, have created some useful resources for other farmers who are interested in improving areas of their farms to provide good habitat for pollinating insects. These resources, which includes a booklet on Pollinator Friendly Grassland Farming, and the full project report can be accessed using the links below.