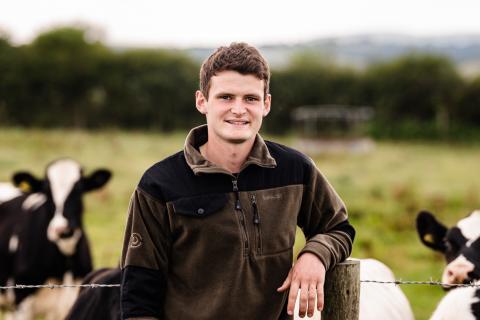 Raised on a family-run dairy farm in Clunderwen, Scott Robinson is now a partner in the 140-cow milking business. Before coming home to run the business alongside his father, Scott ventured across the border to study Agriculture at Hartpury college which included an instructive year’s placement on a mixed dairy, beef, arable and potato farm.

Since taking on more responsibilities in the business, Scott has placed a solid focus on ensuring the farm reaches its maximum potential both in terms of efficiency and profitability.

As well as staying true to his vision of remaining a family-run farm rather than pursuing expansion, Scott is currently leading a change in strategic direction to becoming a flying herd. Embracing change once again, the farm has for the first time this year grown wholecrop barley, a decision Scott hopes will act as the catalyst for growing more feed in a shift to be less reliant on compounds.

Keen to develop an additional funding stream, in 2020, Scott started his own venture on the farm and set up a milk vending machine. With more potential to expand and add value to this venture through a small shop, Scott is eager to facilitate growth in milk sales and hit personal targets.

“Being part of the Agri Academy, I hope to meet like-minded people whilst also broadening my horizons by hearing different perspectives and experiences which, I hope, will trigger new thoughts and possibilities for the farm. I’m confident that meeting people from different people with similar ambitions from a range of sectors will help inspire and motivate me to push forward and achieve more.”