The growth of any kind of vascular plant inclusive of trees for forestry, crops in fields and crops in controlled environment agriculture (CEA) systems are all reliant on the same basic principles of plant biology and physiology. Ultimately plants take up water from their roots in which there are dissolved nutrients required for various aspects of growth as well as the water itself being essential for photosynthesis (though only about 5% of what flows through the plant is directly used). This uptake of water is driven by various water pressure differences across the plant (such as between soil and roots, roots and stems, stems and leaves and leaves and external air) and acts as a wicking mechanism. To maintain a continuous flow of water (aka the transpiration stream) through plants they must release gaseous water vapour along with oxygen (O2) into their surrounding environment through pores in their leaves (stomata) in the process of transpiration. 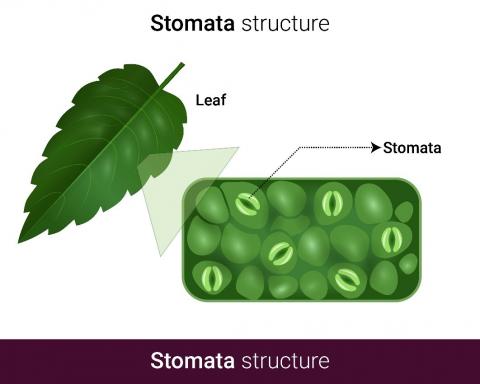 This flow of water is also essential to keep the cells of plants turgid and avoid wilting as well as keeping plants cooler than their surrounding environment. This process of water uptake and release influences itself circularly by impacting the surrounding humidity of the air around the leaves of plants which if not removed causes the transpiration stream to slow down. This difference between the vapour pressure within the leaves of plants and the surrounding atmosphere is something growers refer to as vapour pressure deficit (VPD). It is vital, particularly in indoor growing environments (as humidity must be actively removed or it cannot escape), to consider VPD carefully as it can impact the productivity of crops. If VPD is too low then nutrients are not taken up with water as successfully which can lead to mineral deficiencies, such as calcium for example, and lower growth rates in general. Low VPD is also associated with highly saturated water in the surrounding environment leading to moulds and root rots in plants. If, however, VPD is too high then plants will have high transpiration rates causing heavy water uptake and along with this water higher nutrient uptake leading to toxic levels being present in plants. 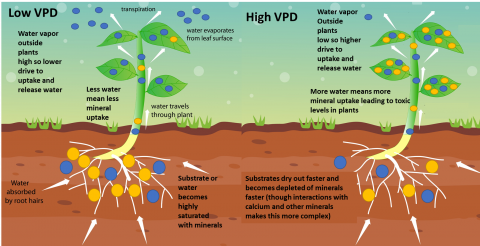 VPD is calculated using the following equations using temperatures in degrees Celsius and an output value in kPa (a unit of pressure) where VPsat is the saturated internal leaf pressure and VPair is the surrounding air vapour pressure.

Alternatively, it can be considered to be;

These values then allow VPD to be calculated via;

The obtained VPD kPa values can be compared with charts for optimal conditions for different plant species at different growth stages. Or there are multiple online calculators from various companies available. Importantly, VPD influences species of plants differently and plants can be influenced long-term by exposure to different VPD levels. For example, during exposure to high VPD levels plants have high transpiration demands and tend to develop leaves with smaller stomata or less frequent stomata. As such it is key to consider the management of VPD to ensure the physiology of plants are appropriate and not impacted in a way detrimental to productivity or growth efficiencies.

VPD in outdoor growing is far more difficult and potentially more input heavy to control, largely VPD is influenced by the local climate and weather patterns. Normally in an outdoor environment, due to shifts in light intensity and temperature in a day/night (diurnal) manner, VPD and photosynthesis levels of plants shift according to the time of day. One of the only methods of impacting VPD in outdoor systems is through providing extra water into the system via irrigation tools unless you aim to provide systems such as shade or enclosure cover. In a controlled environment, there is a lack of external influences to impact the relative air humidity and the potential air holding capacity for water as all factors can be controlled. This means that VPD can be relatively accurately tweaked and changed through a variety of systems.

In the current age of agriculture 4.0, technologies for monitoring and remote sensing of environments are increasingly common. These systems work particularly well in closed environments as there are fewer external variables to factor in. Research in CEA systems has demonstrated that automated systems linking sensors for relative humidity, temperature and leaf temperature to irrigation, humidifier/dehumidifiers and lighting control worked well for accurately controlling VPD without manual inputs. Though it is noted in one review that of the currently available sensor systems, few measure actual leaf VPD but instead give a measurement of crop VPD, as such sensors need to be placed thoughtfully within crop canopies to provide the best indication of actual leaf conditions. Data loggers capable of testing temperature and relative humidity are common technology costing between £20 and £70 on average (depending on the accuracy of results required). Whilst data loggers themselves require active checking the core technology can easily be adapted into live recording systems. Such technologies can and are then integrated into intelligent humidity controllers which can be set to maintain a specific VPD using temperature, light and humidity sensors. Following shifts in temperature which impact VPD, the humidifier controllers can automatically activate humidifiers, dehumidifiers or ventilation systems to increase or decrease humidity in the closed system accordingly without labour input.

VPD impacts growth and productivity. It has been demonstrated across multiple studies that controlling VPD in different growing systems can have beneficial impacts. In CEA studies plants such as tomatoes and cucumbers benefited from lower VPD levels leading to increased growth speeds and dry matter yields of products achieved. As well as simply speed and yield of growth there is also a growing desire from consumers for premium nutritional quality within the food products they eat. For this reason, changes in nutrient profiles related to VPD and other factors are undergoing increasing study. Lower VPD levels are being shown to improve sugar contents in fruit production and increasing relative humidity via fogging systems to reduce VPD has been shown to improve organic acids, antioxidant activity and lycopene in tomatoes. Alternatively, however, other studies have demonstrated that certain breeds of lettuce for example showed beneficial increases in phytochemical levels under the mild stress of high VPD levels despite the reduced biomass yields associated with lower photosynthesis caused by high VPD.  Whilst VPD changes can impact multiple aspects of crop development in controlled environments it is important to note that in no way does this act independently, it is heavily influenced by many other climate and microclimate factors (such as temperature, light, CO2 levels, water availability). As such strategies to control VPD should consider interactions with all of these other impact factors, particularly heating, ventilation and air conditioning (HVAC) systems where needs vary according to external geographical climates and this can be a key area of energy use in many CEA systems (up to 50% of energy demand). Furthermore, control of VPD itself has associated “costs” including energy and water use which need consideration when balancing energy efficiencies and needs for optimal climate-friendly production systems. Low VPD generally is associated with plant physiological impacts which improve water use efficiency (WUE) which means overall systems which can maintain lower VPD values have high yields and reduced irrigation impacts. Additional to controlling VPD to improve water use, research in energy-efficient water cycling and heat cycling irrigation systems are also key for the accurate management of VPD and sustainably achieving high CEA yields. Whilst VPD is recognised as a vital factor in CEA growth it is important to note that modelling has as of yet only been performed in certain crop systems and that many models are still not entirely accurate when predicting and compensating for plant impacts in situations that fall outside of optimal VPD values.  As such it is clear that VPD will feature heavily as a key area for further research and development towards optimal controlled crop production in CEA environments. 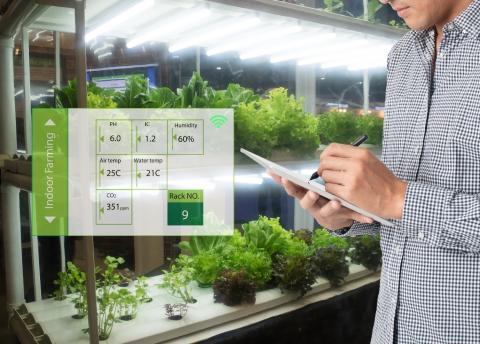 Finally, CEA systems can also play an important role in modelling the growth impact of VPD for outdoor plants providing beneficial knowledge on key maintenance of VPD in field crop situations. One example of this can be seen with miscanthus where CEA VPD studies on leaf expansion determined that models which used temperature alone (without factoring in VPD) were adequate for growers’ to use for accurate yield prediction needs outdoors. This adds to the beneficial impact of CEA systems not only for productivity and sustainability but also for research purposes.

As noted VPD is not just an issue for closed environment systems, it impacts all plants. As CO2 concentrations rise global warming increases, based on the equations above for VPsat and VPair, this causes VPD increases as external temperatures rise and air humidity decreases. This means that plants will experience increasing stress worldwide, particularly in already arid areas or areas prone to water shortages (or under drought conditions) leading to high plant water losses impacting crop health, yields and the ability for crops to fix carbon. Higher CO2 concentrations also act negatively on the availability of ecosystem nutrients according to several climate models which can further impact crop growth. This is particularly important when considering forestry which is a key source of carbon sequestration and is equally impacted by VPD changes due to warming temperatures. Higher VPD causes reductions of carbon fixation alongside increased irrigation needs that could lead to multiple factors of detrimental environmental impacts. Some potential methods to attempt to mitigate these impacts include;

If VPD regulation can be optimally applied to CEA environments it can facilitate increased growth (thus increased crop harvest cycling) and increased yields within the same crop production area, making it a more sustainable form of agriculture. If VPD regulation systems are optimised to save as much energy and water as possible then this could act as a further bonus to sustainability within this food production system.

VPD is an important factor that influences plant growth, water use efficiency and carbon fixation. As such controlling VPD can help to optimise not only the productivity of crops and forestry systems but also their potential climate mitigation efficiencies by fixing more carbon. VPD is influenced mostly by temperature and humidity and as such is very difficult to control in outdoor environments. However, in indoor CEA systems, these factors can be controlled to highly accurate levels facilitating the control of VPD towards targeted plant growth changes. Whilst our understanding of VPD across species of crops requires expansion, it has been demonstrated that controlling VPD via automated systems linked to accurate sensors can have tailored impacts on yields, nutrient contents, water use efficiency and as such on the sustainability of a CEA crop system generally. Furthermore, increasing our understanding of VPD, in general, may become increasingly important as global warming trends increase the VPD levels present in environments worldwide impacting crop productivity and carbon fixation.