Soilless growing systems such as hydroponics and aquaponics are en vogue. They offer the promise of seasonless growing capability, water efficiency and greater control over crop quality, all of which heighten their appeal for a range of crop production applications. Whilst there are numerous variations on the theme within the popular literature (e.g. aeroponics, fogponics, aquaponics, dry ponics etc.), all of the systems follow the same principle. Plants grow, without soil, in a recirculating system providing water and potentially a nutrient solution, directly to the root zone. In fodder systems, this is often as simple as moistening a tray of grain seed (e.g. barley, maize), which when sprouted, can be fed to livestock. This article explains the systems, the benefits and challenges, and provides guidance for anyone considering a hydroponic fodder production system in Wales (or indeed within the UK in general).

There are two main considerations; nutritional benefits vs. other sources of feed (relative to season), and cost of implementation.

There is a growing trend towards home grown fodder, set against a backdrop of rising wholesale prices which is being driven by increasingly unpredictable weather patterns in light of climate change. Prices in the summer of 2018 rose an average of 15% to record levels for hay, haylage, silage, as well as sugar and fodder beet. In 2018 this was exacerbated by ‘the beast from the East’ which meant livestock remaining indoors for longer, and a higher demand for fodder. Whilst no two years are the same, the trend for more extreme and unpredictable weather patterns in the UK is established. These factors combine to provide an incentive to look for stable, reliable and low cost alternatives to conventional fodder supply, and throughout the last 100 years, this had led to a (somewhat transient) commercial market for hydroponic fodder systems. 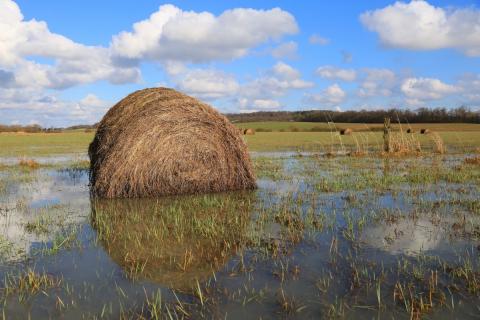 More frequent extreme weather events are likely to threaten the production and cost of silage.

The first commercial hydroponic fodder systems appeared on the European markets in the early 1930s, driven by a similar desire to provide healthful feed during winter at a time of concern over the supply of other fodder types. A review of the experiments conducted in these systems, for dairy cows, beef cattle, calves, pigs and poultry was published as early as 1939. Commercial systems have appeared throughout Europe and the USA from then onwards, with peaks of interest corresponding to concerns over other feed types, and conflicting reports in the literature as to the efficacy of production. Today they are perhaps most commonly associated with Australian and Indian livestock farming, where extreme weather provides a consistent drive for feed alternatives.

The basic process involves a grain (most often barley) which is pre-soaked to induce germination, and then placed in trays for sprouting. The trays are then periodically irrigated and/or fertigated. Advances of this process include the use of nutrient film technique, where the roots grow into a thin film of nutrient-rich water. The grains often need to be soaked in a sterilising solution to prevent incidences of mould as they germinate, which could be harmful to animals. This process can be done in so-called vertical farms – essentially racks of trays housed within a warehouse/farm building, reducing the land footprint required for production (Figure 1). Numerous off-the-shelf examples of such systems can be found. The seed must be clean and of high quality, and high standards of hygiene are essential. Sprouts are generally harvestable in 5-7 days under good conditions. Various reports suggest that these systems require 2-3 hours of labour per day to maintain.

Commercial hydroponic fodder companies report one major advantage to be that 1kg of grain can be converted into 6-9 kg of sprouts, citing this as a multiplier of benefit over cost. However, the majority of the increase in weight is water, and there is an increased manual handling burden to moving the water laden sprouts. A grain has a limited potential without access to light, and thus photosynthesis. In order to multiply its macronutrient content, it would have to be able to produce sugars and build new tissues, all of which cannot be achieved in the dark, in the first week of life. In fact, grains lose a percentage of their dry weight as they take up water, and suffer further losses due to the energy it takes to germinate. In a worked example of actual dry matter productivity. If 1kg grain produces 8kg of sprouts, where the dry matter content of the grain is 90% and the dry matter content of the sprouts is 10%, then the yield of dry matter actually decreases from 0.9 kg / kg to 0.8 kg / kg. In trials, the actual dry matter content of sprouts is highly variable (6-16%) meaning that an 8 fold increase in weight at a minimum of 12% sprout dry matter is required to achieve a modest 6% dry matter yield gain (before taking into account losses due to less than complete germination, which is reported to be ~80%). In practice it is very unlikely that a yield increase could be realised, a view supported in a landmark study (appendix A, in link) conducted at University College Dublin in 1986, and replicated in multiple publications since.

If it is accepted that a gain in yield is either very unlikely, or more realistically impossible, then the use of a hydroponic fodder system can be more helpfully defined as a system to change the quality of grain. Whilst this sounds somewhat less appealing, there are circumstances where it could be advantageous. For example, producing a sprout from a grain does alter the nutritional profile of the resulting feed (Table 1). Energy in a grain is stored as starch. Following germination, the grain mobilises this energy store for growth, breaking down complex molecules into simpler forms. The resulting sprout therefore, contains a much higher proportion of sugars which are easier to digest (although the overall energy value decreases slightly). The starch is also converted to form plant tissues, increasing the fibre content. Furthermore, there are changes in the protein quality (amino acid profile), free fatty acid content, and B group vitamin levels, which enhance nutritional value and digestibility. Anti-nutritional factors such as phytic acid, polyphenols and tannins, present in the seed coat may be decreased following sprouting. Sprouts present the need for a balancing act between digestibility, which is highest in the first 4 days after germination, and protein (and mineral) content which increases once the roots have fully extended and are able to access any nutrient solution, after day 4.

Table 1: Nutritional value of barley sprouts compared to other feedstuffs.

The nutrient profile is undoubtedly altered by sprouting, and in most cases the alteration is beneficial. However, the specific benefit to ruminants is questionable for two key reasons. Firstly, the complex microorganism community in the rumen is responsible for the breakdown of foodstuffs, rendering small additional quantities marginal. Secondly, the gains are generally very small in relation to the whole diet. Furthermore, due to the water content, sprouts could only form a small part of a total mixed ration (TMR), and would not replace the need for common supplements such as calcium, vitamins A & D & amino acids such as lysine, which are no more available in sprouts than any other common feed. The benefits for non-ruminant animals, particularly horses and humans, are likely to be more profound due to a less sophisticated digestive system which is more responsive to an increase in the availability of accessible nutrients. However, a sweet taste (due to the mobilisation of sugars) and pleasing texture could increase selection of sprouts as a foodstuff (much like choosing fruit over vegetables in human nutrition!) which may indirectly lead to a larger consumption of the nutrients on offer, but this may be to the detriment of the animal if other elements of a TMR are not consumed (also much like choosing fruit over vegetables in human nutrition!).

The need for a very high level of hygiene also needs to be underlined several times when a company is considering hydroponic fodder production. We are perhaps not quite talking about a food science laboratory, but it’s not so far away from it either. The reason for this is the risk of mould. Wherever there is a source of carbohydrate (grain), a source of moisture, and in most cases a source of warmth - there is a risk of fungal and bacterial growth. In such a scenario there is a risk of an organism developing which would be harmful to the animal once ingested. There have been reports of animal deaths following accidental consumption of high quantities of moulds such as Aspergillus clavatus from sprouted maize grains. This is a risk to be avoided in all circumstances from an animal health perspective, and could also result in a significant financial loss. This can be overcome by using sterilisation procedures and high levels of general cleanliness, but this may prove difficult to implement on-farm and lead to additional financial and environmental costs.

Hydroponic fodder should then perhaps be viewed as a feed supplement, and therefore its relative merits need to be weighed against the cost of other feed supplements, with an understanding of the true value provided to the animals of the sprouts it produces. Benefits in terms of animal performance are only likely to be realised if the sprouts are correcting an existing nutrient deficiency (such as protein) or if the cost of providing this supplement by other means is prohibitively expensive (for example, in thorough bred horses, or prime breeding stock). As a general rule of thumb, if you have to remove a nutritious component of the diet (such as the grain itself) to accommodate sprouts, and the element you remove is not significantly more expensive than the cost of producing sprouts, you are unlikely to see any benefit. A study often quoted, reported a very large gain in live weight with sprout supplementation (41%). However, in this study, animals were fed a base diet of protein deficient hay, and therefore the sprouts were likely correcting the existing deficiency rather than adding benefit to an optimised diet. Numerous other studies show no difference. In a case where animal performance is sub-optimal, a nutritional deficit may well be a contributing factor, all options for correcting the deficiency should then be considered, selecting the most cost-effective method, in-keeping with the values and production processes of the farm business in question.

In terms of the cost of implementing a hydroponic fodder system, the following is designed to provide indicative figures based on published material, and also to offer some methods for assessing cost-benefit (Table 2). The cost benefit model is adapted from that used by Sneath and colleagues, using an average price for malting barley (AHDB). There is an additional cost to sprouting the grain in a suitable environment which makes sprouts a considerably more expensive option (£449.69 / tonne) compared to the grain alone (£208.50 / tonne). Both options are much more costly than grazing (£75 - 100 / tonne) or silage (£120 – 160 / tonne). It should be noted that this is without considering the capital costs of purchasing and installing the hydroponic fodder production system. Based on a reported cost of £150,000 for a system capable of producing 1 tonne of sprouted barley per day, fully amortised over 10 years (without any borrowing), this could add around £40 per day to the total cost (over 10 years).

Sprouting grains using hydroponics has the potential to alter their nutritional profile, producing a feed supplement which may be beneficial to some livestock operations. However, several caveats are to be considered carefully before proceeding to utilise these systems. Firstly, can the nutritional benefit be gained through alternative supplements in a more cost-effective way? Secondly, can the system be operated safely, hygienically and effectively in its intended location? Third, yield gain for sprouts over grain is largely determined by water and it is unlikely that a dry matter yield gain will be realised. Finally, can the cost of implementation be accounted for in terms of long term economic benefits?