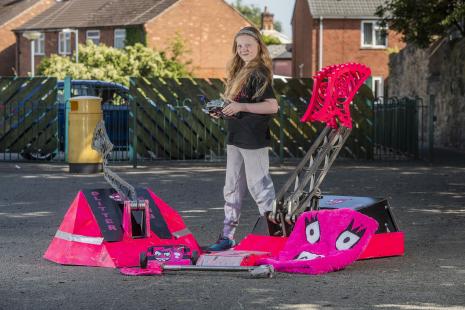 April Prince
Glitterbomb
In a nutshell:
April Prince has ambitions to be a Formula 1 engineer but before that she’s been taking on the world’s most avid robot warriors at their own game
Region:
Wrexham

Eleven year old April Prince from Wrexham has developed such a love for engineering and robotics that she recently returned from China following an appearance on the country’s much-loved Clash Bots show, which is streamed online and watched by hundreds of millions of people every week.

While competing on Clash Bots, similar to the UKs Robot Wars, April debuted her personally engineered ‘Dragon Princess’ robot, the latest robot in her collection which began with the pink axe machine 'Glitterbomb', that turned into a social media sensation following its appearance on UK Robot Wars in 2016.

The Dragon Princess robot was initially designed by April using pencil and paper, and then modelled with artists foam board whereby April created a 3D full scale maquette. This was then used to create the 2D and 3D computer designs that would be used to stress test and manufacture the robot, which is made from armour plated steel.

“I love the process of designing and manufacturing new robots and being considered a role model for girls in STEM is something I find really exciting. Engineering is not just something boys do and there are so many opportunities for girls who are interested in the topic. I don’t know why more girls don’t go onto careers in STEM, but maybe my experiences could inspire more of us to get involved!”

April also 3D prints many parts of the robot, knows how to assemble and repair parts and does wiring and battery maintenance. The only part of the process April does not do herself is the welding and cutting of the steel as she is considered too young to do so at present and so instead she supervises her father James.

And the overall aesthetics of her creation are important to April who presents her robot in a highly stylised fashion, which also extends to her own combat gear. April works with her mother, Rachel to create the princess element of the dragon robot, and Rachel also assists her with the dragon elements incorporated into April’s own beautifully made costume.

Despite her young age, April, who studies at St Giles Junior School, has long been an advocate of girls in STEM (science, technology, engineering and mathematics) and is keen to share her experiences with other young girls so that they feel empowered to pursue male dominated STEM subjects.

Not only has April appeared on both Robot Wars and Clash Bots but she has also been featured on Newsround, and has worked with numerous brands to promote their products, such as BBC Micro:bit, Autodesk Fusion 360 CAD software and Lulzbot 3D printers.

She has also spoken at Techniquest Glyndwr and the Institution of Engineering and Technology in London, where she has won awards for being a female role model, and participated in sessions at Makerversity at Somerset House.

And on July 3rd April  has been invited to speak at the final of Enterprise Troopers National Primary School Competition  in Cardiff, the annual competition run by Big Ideas Wales - part of the Welsh Government’s Youth Entrepreneurship Service which brings together 5 to 11 year olds from across Wales. Participating learners join forces in teams to create and run their own enterprises, selling products or services of their choosing in their schools and local communities.

Perhaps inspiring her love of robotic engineering, April is a massive motorsport fan and a keen go-kart racer, with ambitions to be a Formula 1 engineer when she is older, ideally for Mercedes, her team of choice.

April is such a Mercedes super-fan that she even spent the past weekend at the Mercedes chassis factory in Oxfordshire, as part of the Dare to be Different programme, an initiative which aims to inspire, connect and celebrate women who work in every aspect of motor sport.

Speaking about her love of engineering, April said: “Competing in China was a dream and my performance has really made me want to create more robots and enter more competitions.

“I love the process of designing and manufacturing new robots and being considered a role model for girls in STEM is something I find really exciting. Engineering is not just something boys do and there are so many opportunities for girls who are interested in the topic. I don’t know why more girls don’t go onto careers in STEM, but maybe my experiences could inspire more of us to get involved!”

April’s dad James, commented: “We support April in all of her pursuits and ambitions and love watching her fulfil her goals. Right now she is very focused on creating robots and competing in international competitions and it’s something that as a family we enjoy being a part of.

“Her affinity for STEM subjects and her engineering ambitions are admirable and we are so proud of her confidence and determination. Who knows what lies ahead, but we’ll be supporting her every step of the way.”

And April’s robotic escapades have at least one more chapter yet to come as next year she hopes to travel to America to take part in competitions there, such as the largest robot event in the world, Robogames, and Battlebots, the US offshoot of the Robot Wars franchise. And with a new robot already in early development she has high hopes for her US adventures.