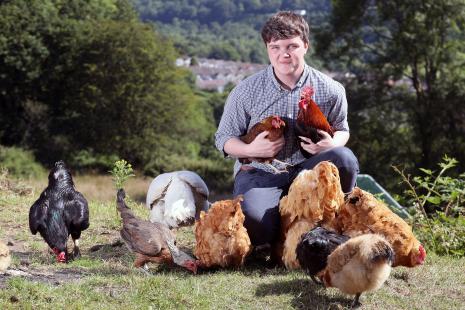 An 18 year old entrepreneur from Ynysybwl, who started his business with just two chickens at 13 years old, has gone on to develop an animal nutrition and poultry business that is currently experiencing strong levels of growth.

Describing himself as a “self-taught” entrepreneur, Callum Griffiths, director of Clydach Farm Group, first established his business venture with two chickens owned by his family, breeding them and selling the poultry to buy his first incubator.

Callum steadily grew his business while studying for his GCSE’s, and the company now boasts over 1,500 chickens and the nutritional pet food division, which is exporting to countries including France, Romania and Spain.

Callum now employs a small team of 12 people, including members of his family who head up the poultry division of his company. This has allowed Callum to focus on the nutritional pet food side, which has quickly become the businesses biggest seller.

Callum said: “While at school, I wasn’t able to dedicate myself entirely to the business and having to juggle my education and the business. However, with a lot of effort and dedication I managed to balance both and the business actually grew 150% year on year until I left school at the age of 16.

“My family and friends thought I was crazy to finish my education and push ahead with the business without any investment or backing, but it’s a risk that has paid off. To this day Clydach Farm has never received any outside investment, which has allowed us to have a completely organic approach.”

And now Callum is swapping managing his poultry business for mentoring in the classroom, heading back to his secondary school as a Big Ideas Wales Role Model.

Big Ideas Wales is part of the Welsh Government’s Business Wales Service which is part funded by the European Regional Development Fund. The programme supports young entrepreneurs on their business journey, offering guidance and advice to get their businesses off the ground.

Callum continued: “I wanted to become a Role Model to let others know that it’s okay to do something different. It’s great speaking to people in their final years of education who might be wondering what their next move is and allowing them to understand that it is okay to take the risk and trust in yourself.”

Callum received business mentoring from a fellow Big Ideas Wales Role Model and commercial property developer, John Bell, when he was just 15, and wanted to encourage other budding young entrepreneurs on their own business journeys.

Speaking of Callum’s achievements, John said: “Callum epitomises the type of entrepreneur we need in Wales. Taking a risk can be daunting and not many do it, instead living by the words of ‘if only’. But ultimately nobody can knock you for trying and learning from your mistakes along the way. I’m so pleased that Callum’s risk-taking paid off and he is flourishing as a young entrepreneur.”

Callum plans to expand his business further by exporting to other overseas markets his nutritional, including Hong Kong, Singapore, and Asia.

In the longer term, Callum is exploring opening Clydach Farm’s first retail site and even venturing into speciality nutritional food and drinks for humans.

He said: “When I started the business five years ago, I was well aware that I was only 13 years old and it would be difficult to get potential customers to trust me and treat me as a serious and viable business person.

“But after a few years into my business journey the reception I receive is so different. I am treated as an equal. I think young entrepreneurs are far more accepted now than ever before. There’s nothing to stop someone starting their own business, and age should never be a barrier. Ultimately you get out what you put in, whether you’re a teenager or an established entrepreneur. It’s about the right attitude and hard work.”