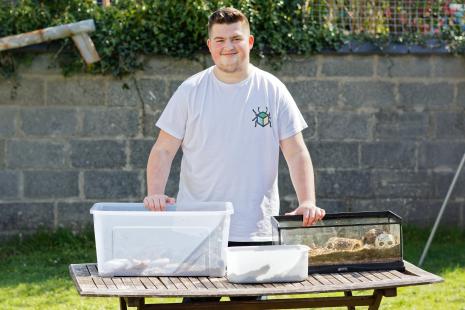 Cameron Reardon
BugBox
In a nutshell:
A 17-year-old from Llanelli with ambitions to follow in the footsteps of his idol David Attenborough has opened Wales’ first entomology shop, turning his childhood bug hobby into a business.

Teenage entrepreneur has the bug for business with entomology venture

A 17-year-old from Llanelli with ambitions to follow in the footsteps of his idol David Attenborough has opened Wales’ first entomology shop, turning his childhood bug hobby into a business.

Cameron Reardon, who is in his final year at Coleg Sir Gâr, founded ethical insect store Bug Box UK at just 16 years old, after spotting a gap in the market in Wales.

Since launching, Cameron has run his education programme in schools around Carmarthenshire and held workshops at Tŷ Aberdafen, a brain rehabilitation centre in Llanelli, but hopes to take his educational sessions to schools across Wales in the future.

Cameron tailors his school workshops to reflect issues impacting insects’ environments at that time to keep the educational programmes relevant. For instance, he has recently been focussing on native insects like bees which are suffering a massive decline.

Bug Box UK also offers people the chance to overcome a fear of insects. Held in groups in order to encourage other members, the sessions see people start by holding small bugs before moving onto much bigger insects like tarantulas or centipedes.

Cameron said: “I’ve always had a love for bugs and insects and I currently have over 50 different species. I’ve followed TV programmes with people like Steve Irwin and David Attenborough for a long time and learnt from them how important animals are to the environment. This developed into a real passion of mine and now I want to educate others on the wonderful world of insects.

“There is generally still a fear surrounding insects which I hope to address through the educational programmes and phobia classes, so people can understand just how important insects of all sizes are to our eco-system.”

Cameron started his business with the help of Big Ideas Wales, the youth entrepreneurship service in Wales. Big Ideas Wales is part of Business Wales and is funded by the Welsh Government and the European Regional Development Fund. The service is aimed at anyone between the age of 5 and 25 who wants to develop a business idea.  Cameron recently showcased his business at Big Ideas Celebrated, a national celebration of entrepreneurship in the Swansea Liberty Stadium.

Bug Box UK was launched alongside Cameron’s own education, currently studying Public Services at Coleg Sir Gâr, before embarking on a Business and Marketing degree at Swansea University in September. 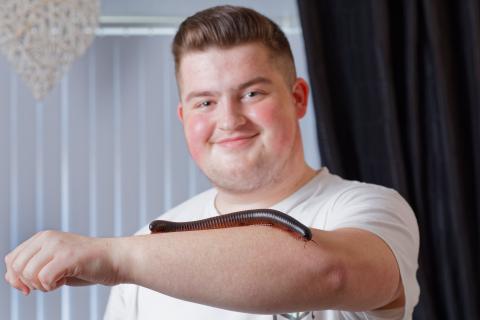 He said: “I love running my own business and getting to meet lots of different types of people every day. It’s also great being my own boss allowing me to work hard for my own success alongside my studies.

“I found out about Big Ideas Wales through the Enterprise Champion, Becky Pask at my college. She referred me to the service, and from there Big Ideas Wales helped me set up the business.”

Cameron continued: “As well as working with me to develop my business plan, Big Ideas Wales always has a great range of events on offer to young businesspeople. I attended an exporting workshop in Llanelli which was very eye-opening, allowing me to understand how to export to different countries in the future.”

Samantha Allen, Big Ideas Wales business advisor, has been working closely with Cameron to help him start his business. He said: “Cameron is just 17, still studying in college but somehow is managing to run a successful business. He is a great example of an ambitious and determined young entrepreneur and I can’t wait to see how Bug Box UK grows in the future.”