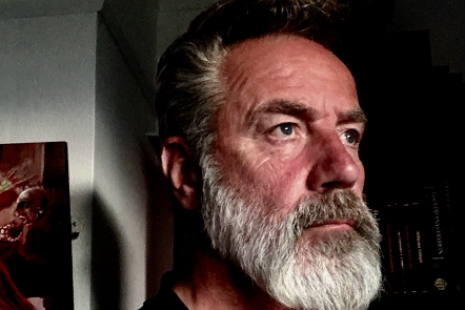 Huw Davies has always been driven to create things, over what has rarely been a straight path. On leaving school, he trained as a stone-mason, a skill he still enjoys returning to. Over the next 40 years, he’s worked as a: freelance artist; film maker; photographer; sculptor; painter; animator; puppet maker; standup comedian; storyteller; writer; illustrator and a green wood construction practitioner.

Huw has equally shared his creative passions by inspiring others in schools colleges and universities in Wales; England; France and the USA.

He was the leader of the arts department of the Arts Factory in the Rhondda and his leadership was instrumental in it receiving an Investors in People Award.

Huw was also the trainer/producer for 9 years on the BAFTA-winning Capture Wales Digital Storytelling Team, which produced over 700 short films for broadcast on the BBC, inspiring and enabling others to tell their own stories in their own words the length and breadth of Wales and beyond.