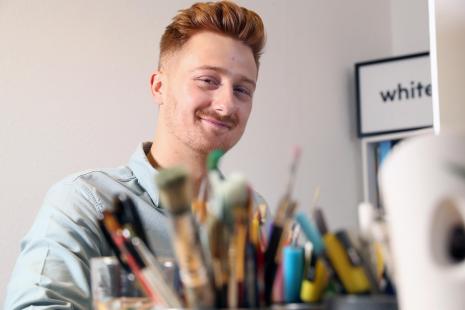 James Lewis
James Lewis
In a nutshell:
A 23-year-old creative from Barry who became homeless at the age of 16 has launched his own graphic design and typography business, and is now working with clients across the globe.

A 23-year-old creative from Barry who became homeless at the age of 16 has launched his own graphic design and typography business, and is now working with clients across the globe.

Despite a traumatic childhood in which he lost both parents to different health conditions by the age of 12, James Lewis established his eponymous design company, and recently launched his first exclusive 3D font VERSA which has been bought by designers all over the world.

As a teenager, James would use his creative flair as a coping mechanism for the adversities he faced growing up. And since then he has turned his passion for typography and design into a successful business, boasting clients such as Red Bull, Wix, and stationary firms Manuscript Pen Company and Tombow. 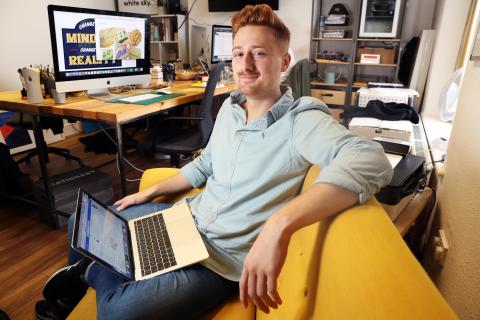 James credits much of the turnaround in his life to Lynne Appleyard from Barry Island, who he rented a room from aged 16, with government assistance, who encouraged him to think about his future ambitions. From there James started experimenting with graphic design, creating logos and artwork for fun.

James has also built up a following of nearly 200,000 on his Instagram page (@jamesllewis) where he shares photos, video tutorials and updates on his creative career.  And he also established The Ligature Collective, a Cardiff based collaborative branding agency, which brings brands to life through bespoke design – which also has almost 270,000 followers on Instagram (@ligaturecollective).

James’ bold designs have been noticed across the world, and he has been invited to run workshops at global design expos and conferences in Tokyo, Milan and Indonesia. Next month he will embark on a four-date US tour where he’ll be running lettering workshops in New York, San Francisco, Austin and finally in Arkansas where he will not only be teaching a workshop but also giving a keynote speech at the Made by Few creative conference.

Speaking about his work James said: “I’ve always used creativity as an outlet to take me away from the hardships in my life but having been built up by the encouragement I have received from a growing community on social media I started to have more belief in my capabilities.

“Early on at University I had to decide between taking an academic route or following my creative passions and of course my love of all things creative won. And although it probably wasn’t the easiest path to take, its one I find extremely fulfilling.”

By his third year at the University of South Wales, which James was financially supported through via a bursary awarded to him by Welsh Government, he had built up such a following on social media that he had created enough of a platform to develop his business, especially as clients were already contacting him through his Instagram channels.

James has grown his business with the support of Big Ideas Wales, part of the Business Wales service to encourage youth entrepreneurship in Wales. Big Ideas Wales is funded by Welsh Government and the European Regional Development Fund aimed at anyone between the age of 5 and 25 who wants to develop a business idea.

James was recommended to Big Ideas Wales through a friend he met on the NatWest Entrepreneurial Spark programme. Since then, he has met with Big Ideas Wales business advisor Chris Howlett.

James continued: “When I first met Chris I was absorbed in the creative side of my work but wasn’t thinking with a strong business mind. I was doing ad hoc work on logos or artwork commissions here and there, and while that was great, Chris encouraged me to think about launching a product to expand my portfolio and brand. This was where my first font VERSA was born, which is a style unique to me. Chris’ advice on finances has been invaluable too.”

And now with a permanent studio space at Cardiff’s Museum Place, James is really thinking about his future, and has aspirations to expand his product range further while continuing to run workshops to inspire other budding creatives around the world.

Chris Howlett, business advisor at Big Ideas Wales said: “James is a remarkable young man who has shown a huge amount of drive despite lifechanging experiences in his teenage years. He is an inspiration to any and all businesspeople, regardless of age, and a shining example for other young businesspeople that its possible to follow your dreams no matter your circumstances, you just need the right attitude.”