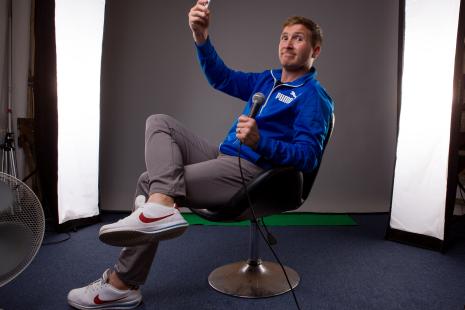 I’m a self-employed / freelance comedy writer and performer. I also write and record sketches, including some for broadcasters such as BBC Sesh.  I’ve been self-employed from around age 24. I studied broadcast, filming and editing from college level and then again at University. I also got work experience as a cameraman while studying, so I learned some skills and decided to start a video business on graduating. I did this from scratch with help from a Prince’s Trust grant of £300 and Welsh Government business support and grants as I grew. I had a very basic website and some leaflets using the first grant. We won some awards. I learned the business side of things as I went, but I’ve had good mentors at every step of the way. After ten years I closed the business as I needed a new challenge. Performing comedy was that challenge, I started this at around age 35.

I’ve always been inspired by stories; whether from books, movies or TV shows. My work has always involved some kind of storytelling. I could write stories even when young, and the books that inspired me then were Roald Dahl and J.R Tolkien stories. My parents always encouraged us to read and had lots of books around. I was also into films and TV in a big way; I was the kid who knew the next lines from movies. I could do impressions and would do characters from shows like Harry Enfield and Chums and the Fast Show with friends at school (and could also impersonate some teachers!). There have been lots of other inspirations from comedians like Peter Kay, Frank Skinner and Jason Byrne, but also movie writers and directors like Steven Spielberg.

I think setbacks in business are natural. In my first business I expanded to a new (and expensive) office. It was a move that I didn’t need to make.  That one thing taught me a huge lesson: to keep things lean. It led to me closing that business and moving to comedy, which has been a great thing. It’s a good example, as what seemed like a problem was a blessing in disguise. In comedy, problems are jokes not working, terrible or unplayable shows and even my car dying on the way to the Edinburgh Fringe festival.

The thing I’ve always enjoyed most about being my own boss from the very start is the freedom. It’s the ability to do what you want, when you want, with the people you want to do it with. I also have an ADD type brain, which means I like to be creative, but can struggle to focus on one thing for too long and am easily distracted. Being your own boss is perfect for this, as no two days are the same and there are lots of things to do. The variety of being your own boss satisfies a creative urge. The main thing however is the time you get to spend with family and friends, especially my two children when they were born.

Get started as young as possible and don’t be afraid to make mistakes as it’s the best way to learn. But first take time to travel and learn about the world while you’re young. Get life experience and make contacts all over the world before you start your new (or next) venture. Learn new languages. University is good for making new friends and can open doors but, it’s not for everyone and not essential to become self-employed.  People and relationships are everything. Surround yourself with positive but real friends and family. Try lots of different things until you find your thing. You’re more likely to stick at something when you enjoy doing it.