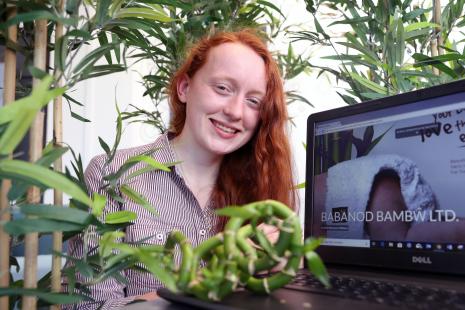 Rhiannon Williams
Babanod Bambw
In a nutshell:
A young entrepreneur from Llantrisant is determined to tackle the world’s environmental issues head on with a new business making reusable nappies from ethically sourced Ugandan bamboo.
Region:
Cardiff

A young entrepreneur from Llantrisant is determined to tackle the world’s environmental issues head on with a new business making reusable nappies from ethically sourced Ugandan bamboo.

21-year old Rhiannon Williams has established Babanod Bambŵ, a company with sustainability at its core, that swaps non-biodegradable materials used to make disposable nappies with bamboo grown on Ugandan farms.

And unlike other kinds of reusable nappies that are predominantly made from cotton, the high absorption rate of bamboo fibres means that Banadod Bambŵ’s nappies will be far more permeable, while remaining hypo-allergenic to reduce nappy rash.

Rhiannon’s business idea came to her during a module about ethically sustainable businesses during her Zoology course, which she is studying at Bangor University. Her inspiration came from a desire to address the worldwide waste pollution crisis, of which disposable nappies play a huge role in, as well as influence from her mother who had attempted to use reusable nappies when Rhiannon was a baby.

Rhiannon said: “While my mum had good intentions in using reusable nappies, the cotton material caused bad nappy rash and their lack of absorbency made them impractical. To me it seems like a no brainer to use bamboo which is highly absorbent and grows quickly after harvesting without the need for irrigation, pesticides and fertilisers.

“Essentially it’s a really good model to reduce our carbon footprint, while also working with Ugandan people who often have unused or under-utilised farm land on which to grow the bamboo.”

The nappies will be made in Uganda before being imported back to the UK, employing Ugandan people to both grow the bamboo raw material, as well manufacture the nappies. Rhiannon is in touch with existing cooperatives in Uganda, who operate on a Fair Trade basis, which she believes will give her products a significant advantage in the market place over rival products dependent on supplies from industrialised China.

She continued: “The UK nappy market is worth over £470 million per year, yet only 2% of consumers opt for reusable nappies. While reusable nappies tend to have a higher price point initially, their reusability quickly eliminates that. And with the worldwide warnings about our use of non-biodegradable products and the impact it’s having on our environment, I hope that more people will start choosing their products more consciously.”

Rhiannon is now taking on a Masters degree in Herpetology at Bangor while developing the Babanod Bambŵ alongside her studies.

Babanod Bambŵ was formed with the support of Big Ideas Wales, part of the Business Wales service to encourage youth entrepreneurship in Wales. Big Ideas Wales is funded by Welsh Government and the European Regional Development Fund aimed at anyone between the age of 5 and 25 who wants to develop a business idea.

Bangor University’s enterprise team encouraged Rhiannon to enter the Big Ideas Celebrated competition earlier this year in Bangor, a national event for budding young entrepreneurs to pitch their business idea, develop their entrepreneurial skills and start to build a network of contacts. Rhiannon presented her business concept to a mix of successful business people and her peers, gaining constructive feedback on her venture.

Lowri Owen, from Bangor University’s enterprise team said: “Rhiannon has hit the nail on the head with her business at a time when we all need to start being more thoughtful about the products we buy that can have a long-term impact on our environment.

“Rhiannon has a clear natural aptitude for business, as well as a passion for conservation, which means that Babanod Bambŵ has every chance of being a great success with Rhiannon at the helm.”

If you've got an idea for a side hustle, click here to find out more.