What started as a family lockdown project for a Denbighshire couple, to nurture an interest in growing among their three young children, has developed into a successful pick-your-own (PYO) venture with sales of flowers, fruit and pumpkins.

Siôn and Lucy Owens run a small flock of sheep, and have other jobs too – Siôn as an accountant for a firm of agricultural auctioneers, and Lucy works in the marketing and sales department at a butchers.

In the first months of the pandemic, they started growing flowers at their home near Ruthin, to sell from the garden gate.

“The children were all home, and it was a bit of a project that we could all have a go at,’’ Lucy explains.

Later that year, they were offered 1.6 acres of land to rent at Cae Derw, and their small-scale project became a much bigger one, with input and support from Farming Connect.

“It was more land than we had intended to take on, but it was in a prime spot close to a road, so an ideal position for a PYO,’’ says Lucy.

To get a better understanding of that market, the horticulture project at Cae Derw became a Farming Connect Focus Site Project, and Lucy also registered for several Farming Connect webinars, with experts including Chris Creed of ADAS providing advice. She also received one-to-one technical support as part of the project.

“We had already decided to grow flowers, but knew we needed something else, too,’’ says Lucy.

“The webinars and expert support were really useful, as the advice was to keep it quite simple, to grow a few of the most profitable crops, rather than lots of things.’’

To keep the enterprise as sustainable as possible, Lucy opted to use the ‘no-dig’ method (apart from the soil in some sections being turned once at the very beginning, to provide a more even surface).

The Owens family haven’t gone down the route of organic certification because they say registration is not financially feasible on their scale, so have opted for a ‘grown naturally’ philosophy.

“We needed some muck to increase levels of soil organic matter, so we contemplated whether we should haul organic manure from a farm distant from us, or use manure from the conventional dairy farm next door. From an environmental point of view, it seemed sensible to make use of the resource nearest to us,’’ says Lucy.

They have even used fleeces from their sheep as a weed suppressant as part of a Farming Connect trial, and this has been very effective.

“We will need to shear the sheep again soon to top this up!’’ says Lucy.

In autumn 2021, the family opened their doors for PYO pumpkins, offering multiple varieties from the aptly-named Polar Bear (a large white) and Knucklehead, to the smaller squash varieties.

It was a great success, and that offering will be repeated again this year.

Cut flowers and their autumn-fruiting raspberries have been popular, too – in April, visitors enjoyed picking tulips for the first time.

They are also offering an opportunity for children to learn more about growing, to share the experience enjoyed by their three - Betrys, Rolant and Cledwyn - by launching the ‘Mini Growers’ Gang’.

“We had our first session on Good Friday, planting pumpkins and walking around the field, learning about nature and growing and doing other activities,’’ says Lucy.

She admits it has been a joy to share the garden with others: “I’m not very precious about where and what people can pick - that’s what the flowers are there for - and I grow a lot of ‘cut and come again’ varieties, so whatever is picked one week will be back again the next.’’

Among the varieties that have grown well are cosmos, dahlias and snapdragons.

Lucy says the support she has received from Farming Connect has been invaluable, and has given her the confidence to develop the business and to trial new ideas. She had previously participated in the Farming Connect Agri Academy.

The venture hasn’t been without its challenges, though. Pests (largely slugs) have been a major issue. However, they are learning as they go along, and 2022 will be the first real test, to establish if the business can be financially viable to allow more of the working week to be devoted to it.

“It is hard work, there is no denying that – the tulips we have been selling recently were planted in the snow – but we will continue to juggle it with our jobs until the financial side of it becomes more sustainable,’’ says Lucy.

Farming Connect is delivered by Menter a Busnes and Lantra Wales, and funded by the Welsh Government and the European Agricultural Fund for Rural Development. 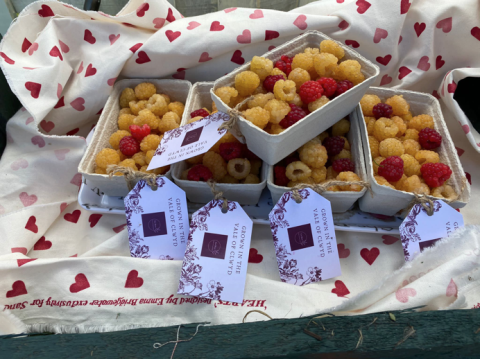