Milking for all it’s worth (Farming Connect Udder Health Visit)

In July 2019, Farming Connect collaborated with South Caernarfon Creameries to design and implement a trial into efficient methods of addressing milk quality problems as a pilot project. Kite Consulting, with partners Advanced Milking, was appointed to deliver a risk-based evaluation of farm performance, using analysis of farm data and laboratory results to target a half-day farm visit.  Bespoke action plans were generated for each farm to prioritise key methods for improving milk quality following each visit.

The Hughes’ family milk 125 Holsteins averaging over 10,000 litres in 305 days. The herd is expanding through home-reared replacements, with a target of milking 160 autumn calving cows. This well managed herd is always on the lookout for further improvements and, as such, John and Sion Hughes were keen to take advantage of a visit from Advance Milking as part of a milk quality improvement pilot project fully funded by Farming Connect.

Dan Humphries of Advance Milking visited the Hughes’ family to deliver a comprehensive audit of all udder health risk factors. At the time of the visit, mastitis incidence was a very creditable 10 cases/100 cows/year. However, recent months had seen a rise in bulk milk somatic cell count (SCC), with a three-month average of 226,000 cells/ml. This was taking the Hughes’ just outside of the threshold for the top payment band with South Caernarfon Creameries.

A thorough evaluation of environment, housing and general management protocols did not highlight any significant risk areas. Ventilation, bedding and hygiene were well managed in both milking and dry cow accommodation. Building layout and loafing areas were all well above minimum standards and stocking rate was at a very generous 86%. General cow health was good with the herd routinely vaccinated against BVD and Leptospirosis. These are infectious conditions that can act as ‘gateway’ diseases to poor udder health. Ketosis levels were low and hypocalcaemia rate was reasonable at 2.4%, minimising the extra risk for udder infection that accompanies these conditions.

The main risks identified by the visit were found in the milking machine and milking process. The herd are being milked through a new Dairymaster 20:40 swingover installed 12 months ago. The machine is correctly installed and well-maintained, however the milking time test (‘dynamic’ test) demonstrated that there are some significant changes that can be made to improve performance. 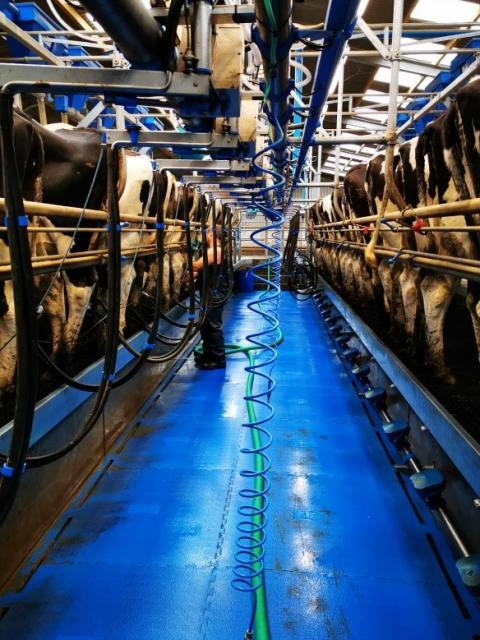 Although the milking machine is new, the ‘dynamic’ milking time test revealed potential for improvements through fine-tuning.

The current Automatic Cluster Remover (ACR) settings are allowing significant overmilking -an issue that increase the risk of hyperkeratosis (rough teat ends) and swelling of the teats. Not only is this uncomfortable for the cow, therefore, reducing milk let-down, it also increases the risk of udder infection.

The fit between liner and teat fit also showed room for improvement, with the milking time vacuum testing demonstrating that vacuum at the base of the teat (in the mouthpiece) was much higher than the target range in a lot of cows. These high vacuums around the upper teat are a risk for teat swelling, a condition that was observed in a large proportion of teats when the unit was detached.

These two machine problems were being added to by milk flow from the udder being lower than it could be. This was a result of the timings of the milking routine not being appropriate for maximising good milk let-down from this herd. The current routine of dipping, wiping and then cupping twenty cows is resulting in too long a lag time from stimulation to unit attachment. This is resulting in ‘biphasic’ milk flow, with more low flow rate periods, longer unit-on times and more traumatic forces being put on the teats.

The results of each different element of the assessment were discussed to establish the main areas of focus for achieving udder health improvements. A plan was agreed upon that prioritised elimination of the ‘bottlenecks’ that were limiting performance whilst also trying to stick to actions that were affordable and easy to implement.
Firstly, the ACR take-off trigger was increased to 500ml/min from 250ml/min. This reduced the overmilking. A further increase (to 600ml/min) was recommended once the milking routine was altered to improve milk flow patterns.
Secondly, a milking protocol of ‘Dip-10; Wipe-10; Attach-10’ was implemented. Working with batches of ten cows ensures unit attachment is ninety seconds after stimulation, maximising milk flow rates and minimise opportunity for bacterial entry into the teat.
A longer-term plan was to investigate smaller liners more suitable for a Holstein herd (roughly 22mm barrel diameter). A better fit between liner and teat will reduce the high vacuums that the upper portion of the teat is exposed to, resulting in healthier teats, more comfortable cows and less udder infection. 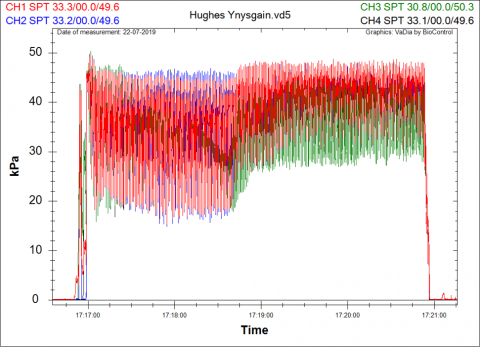 Figure 2. Milking time recording inside the liner demonstrates inappropriately high vacuum at the teat base, a sign of poor fitting liners.

It was also recommended that the Hughes’ collect milk samples for bacteriology from clinical mastitis cases and recent high SCC cows. Advance Milking supplied a protocol for cow choice and quarter identification. Bacteriology will identify the bacteria causing the problems and enable any preventative measures management controls to be tailored to the situation on specific farms.
Once the bacteriology results were back, John and Sion were also advised to work with their local vet to review treatment and dry-off protocols. This will enable them to pick the most cost-effective treatments and develop robust protocols for selective dry cow therapy, helping manage the chronic high cell count cows by increasing the chance of curing them over the dry period.

John and Sion were proactive in implementing the recommendations. As such, they quickly saw improvements in milk quality following on from the July visit. The average bulk milk somatic cell count for the three months following this troubleshooting visit was 197,000 cells/ml. This is an improvement of 37,000 cells/ml compared to the bulk tank average of the previous three months.

This improvement was particularly satisfying as regionally, udder health parameters across north Wales were deteriorating over this period, suggesting that many farms were struggling with external factors such as the weather at that time.

Prior to the visit, the monthly averages had been above the processor threshold of 225,000 cells/ml for three consecutive months. Following the visit, all monthly recordings were within the top payment bracket for somatic cell count. Not only do these improvements increase the potential revenue per litre, but on a herd level a reduction of 37,000 cells/ml equates to a significant increase in milk yield. 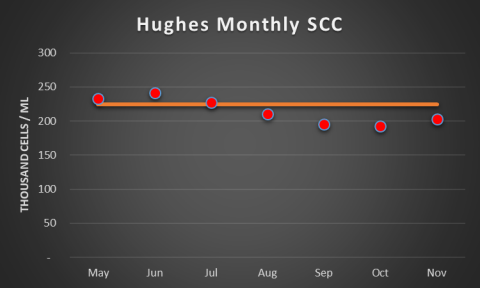 Analysis of the cell count data after eight months shows that these improvements have been sustained. For the period following the udder health review the herd average somatic cell count is 149,000 cells per ml, down from an average of 185,000 for the same period preceding the changes. This has been achieved by reducing the percentage of the milking herd with a high cell count to below the target of 15%. In the eight months following the udder health review the herd was on target six times, compared to just twice in the preceding eight months. This improvement comes from a reduction in both new infections and chronic infections.
Another striking improvement has been in dry cow performance. Over the busy autumn calving period there has been an exceptional increase in dry period cure rates from 51% last season to 81% this season.
These results are particularly pleasing given that this herd was already performing reasonably well with low mastitis rates. The further progress is a credit to the hard work and attention to detail of the Hughes family.