The emergence of milking sheep as one of Wales’ newest and most promising farming enterprises is no accident.

A new sector driven forward by pioneering farmers from all parts of Wales eager to respond to market demand and based on centuries of knowledge and tradition managing sheep, Farming Connect has been there to support family farms to develop their dairy sheep enterprises.

This article aims to celebrate the achievements of farmers who Farming Connect have been fortunate to work with over the last five years.

With 10 farms in Wales milking sheep this year, the sector is understandably attracting more interest from farmers seeking to future proof their family businesses, and those further along in the food supply chain looking to capitalise on the growing demand for sheep milk products. 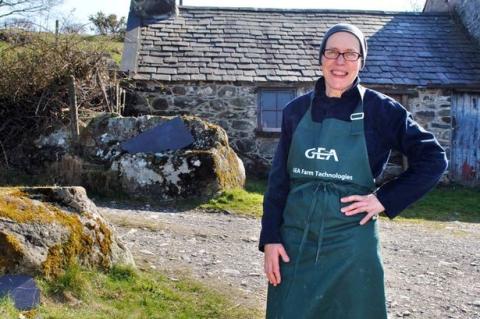 Nutritionally, ewes’ milk contains healthier fats, higher calcium, protein, energy, iron, and vitamins than cows’ milk. Sheep milk is predominantly A2, which means it contains far less of the A1 beta-casein protein that is known to cause digestive discomfort.

A group of farm businesses who initially got together through Farming Connect’s Agrisgôp facilitation support in 2017, teamed up with award-winning and internationally respected artisan cheesemaker Dr Carrie Rimes from Bethesda, north Wales, to secure EIP Wales support and funding in 2019.

The group behind the EIP Wales project wanted to better understand the impact of the following variables on the bacteriology and composition of sheep milk:
-    Stage of lactation.
-    Breed, with a focus on pure Friesland, pure Lleyn and Friesland cross Lleyn ewes.
-    Selenium diet supplementation for ewes.

“As a supplier of ewes’ milk for Dr Carrie Rimes’ ‘Cosyn Cymru’ cheese-making business in Bethesda,” explained lead member and farmer Alan Jones of Chwilog near Pwllheli, “I felt there were large gaps in my understanding and the information available for me or any other farmer in my position, on what affects the quality of ewes’ milk when it comes to making cheese. Much research on dairy ewe milk production has been confined to European regions other than the UK.”

The group benefitted from an extensive literature review conducted by Farming Connect’s ‘Knowledge Exchange Hub’ that allowed them to shape the project to make best use of the funding.

“With guidance from Dr Yoav Alony-Gilboa of Friars Moor Vets in Dorset, the specialist involved in the project, we have implemented new protocols to bring our SCC score down to improve our flock performance,” explained Alan. “This included extreme actions such as removing high-scoring ewes from the milking flock, and more operational adaptations such as better methods for teat wiping and improving knowledge of how to monitor and maintain good udder health. I am in regular contact with most dairy sheep farmers in Wales, and we’re regularly comparing our husbandry with bovine dairy – we are literally at the start of the journey with sheep-dairying in Wales, and the scope for improvements are going to be seismic.”

Dr Yoav Alony-Gilboa was added to Farming Connect’s approved list of technical consultants in 2021, and farmers immediately made use of his expertise and accessed 100% funding through collaborating as a group to access technical support.

During the running of the project, Alan has tripled his flock to 135 ewes, moved to a once-a-day milking and developed a phased approach to lambing, with groups of ewes lambing from February to May, to extend the period of milk availability.

The group have just concluded, and will soon be publishing their findings, including how the Lleyn breed offers scope for an extensive milk and meat sheep system for Welsh farmers. 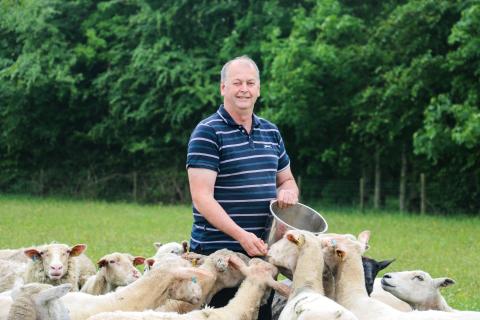 Alan Jones became a Farming Connect mentor in 2019, opening the door for several farmers to benefit from his knowledge and experience.

To thrive in an emerging sector, dairy sheep farmers such as Bryn Perry and Rebecca Morris from Haverfordwest have had to think outside the box. Having won the ‘Agri-Academy Challenge’ in 2021 as one of two members that year to be involved in milking sheep, Bryn returned home to continue work on converting sheep milk whey left from the cheesemaking process into vodka, a Wales first.

Launched in 2022, ‘Ewe Whey Vodka’ is made from distilling the whey to make vodka with a creamy finish that can be drunk neat.

“You have to look at ‘wheys’ to add value if you’re going to milk sheep,” explained Bryn.  “We have made good progress on our cheese and ice cream production that gives us the foundation to develop our flock, and the new vodka we’ve developed gives us another string to our bow moving forward.”

“I was very grateful for the experiences I got from Farming Connects’ Agri-Academy and further assistance to set-up as a new entrant and first-generation tenant on a Pembrokeshire Council Farm,” said Bryn. “And the Agrisgôp group has been valuable in accelerating our learning and networking.”

Huw Jones of Llannerchymedd chose to take his new venture down a more intensive route, starting with a flock of 200 ewes and soon realised he needed to venture beyond the farmgate to learn from others. In 2019, he secured a Farming Connect Management Exchange that allowed him to travel to southeast France to view first hand several well-established dairy sheep flocks. He later went to meet dairy sheep farmers in north of England to continue his learning on the pros and cons of different breeds to milk.

“I finished the study tours convinced that the Welsh climate is arguably better to milk sheep than places I saw in France,” explained Huw, who is now into his fourth year of milking. “It also reinforced the harsh reality of the sector at the moment in Wales that you must find or develop your own route to market.”

“I was surprised to realise that a flock of 50 sheep offered a good living for one farmer in France, with value added through processing to cheese and yogurt. Consumer knowledge of sheep milk products in the UK is lagging well behind France, although there are strong indicators that it’s changing,” shared Huw.

As an Agrisgôp Leader and EIP Innovation Broker, Geraint Hughes of Lafan Consultancy Group has played a facilitative role in supporting farmers to make the most of Farming Connect support.

“We virtually had no provision for dairy sheep farming back in 2017 through Farming Connect,” Geraint observed. “Once it became clear that there was a momentum, Farming Connect was able to respond and offer a suite of support that has supported the sector in various ways from creating space for farmers to meet up to exchange experiences and views, providing peer-to-peer support to highly technical work investigating what impacts milk quality on farms.”

“What has been particularly pleasing to watch is how farmers have looked and understood Farming Connect and identify ways that the various provisions can be moulded to meet their demands at the time,” shared Geraint.

Even during the lockdowns, regular virtual events have been held with one Farming Connect dairy sheep webinar attracting over 80 live viewers during winter 2021. Making the most of virtual technology, farmers from New Zealand, USA and Ireland have all shared with Welsh farmers their experiences milking sheep.

In August 2021, Hanna and George Finlay of Ballyhubbock Farm in west Wicklow, Ireland featured in a “Zoom around the world” 20 minutes video commissioned by Farming Connect, where they gave an insight to their farming business milking sheep and on-farm processing to make cheeses and ice cream. Visit the Farming Connect YouTube channel to watch their inspiring story.

With 2022 set to break records again for the fledgling dairy sheep sector in Wales, one person who has been fortunate to work in the shadows of the pioneering farmers has a dream, that involves sheep, but without having to count them.

“We have award winning ewes’ milk cheeses made by ‘Cosyn Cymru’ in Bethesda, and a brand-new range launched by farmers Scott and Isabel Coates under the ‘Monmouth Shepherd’ brand,” said Geraint Hughes. “We can also add milkshakes, yogurt and ewe whey vodka to that list of Welsh products – I look forward one day to be able to celebrate with all involved in the Welsh dairy sheep sector and enjoy a feast made with all these fantastic products.”