Minister for Environment, Energy and Rural Affairs Lesley Griffiths, attended a special ceremony at the Winter Fair in Llanelwedd, when she addressed candidates from this year’s Farming Connect Agri Academy as they draw towards the end of their ‘academic’ year of training, mentoring and study visits.

The ceremony, held on Monday, 25 November in the Welsh Government pavilion, was attended by representatives from a number of Wales’ key agricultural stakeholder organisations.   Each of the Agri Academy’s three group leaders gave a short presentation focusing on some of the highlights and knowledge gained this year, including the overseas study tours which had given candidates a unique opportunity to compare different ways of working and managing rural enterprises.  The Rural Leadership Programme (RLP) candidates visited the World Trade Organisation headquarters in Geneva plus a wide range of successful farm businesses; the Business & Innovation (B&I) candidates visited some of the leading agricultural businesses in the Netherlands, including a floating dairy farm in the centre of Rotterdam docks, while the Junior candidates visited innovative businesses in Iceland, including red meat farms which had tourist viewing platforms in their cattle shed;  a farm which had developed a woollen mill on site plus a tour which took in all areas of an abattoir.

Einir Davies, development and mentoring manager with Menter a Busnes, which together with Lantra Wales, delivers Farming Connect on behalf of the Welsh Government, said that this year’s intake of 36 candidates included farmers; veterinary surgeons; a college lecturer; rural surveyors; geneticists; communications and procurement specialists and numerous students, whose collective hobbies range from rugby to sheepdog trials and from pigs to poultry.

The Minister paid a personal tribute to Ms Thomas for her longstanding contribution to the Agri Academy, which began the year the initiative was launched in 2012, before congratulating and thanking all the candidates for their dedication and focus, and handing out leavers’ certificates.

“I have no doubt that the intensive programme of fully-funded mentoring, training, and study visits has given each one of the 236 candidates we refer to as Agri Academy alumni, with the confidence, skills and networks they need.

“The programme has helped them achieve not only their personal goals, but create business opportunities too.  This privileged group of individuals are all determined to ‘put something back’ into their family businesses and to rural economies.

“This ethos is exactly what is needed to create a sustainable industry where Welsh producers can continue to lead the field in terms of quality, provenance and achieving the highest standards of farming while also safeguarding the future of our environment.”

The Minister also urged those present to act as ambassadors on behalf of the Agri Academy.

“By mid-January, when the Farmers’ Union of Wales holds its annual farmhouse breakfast in Cardiff Bay, next year’s Agri Academy application window will be open.

“It’s an initiative that has transformed careers, businesses and much more.

“With your support, we can and must keep the momentum going.” 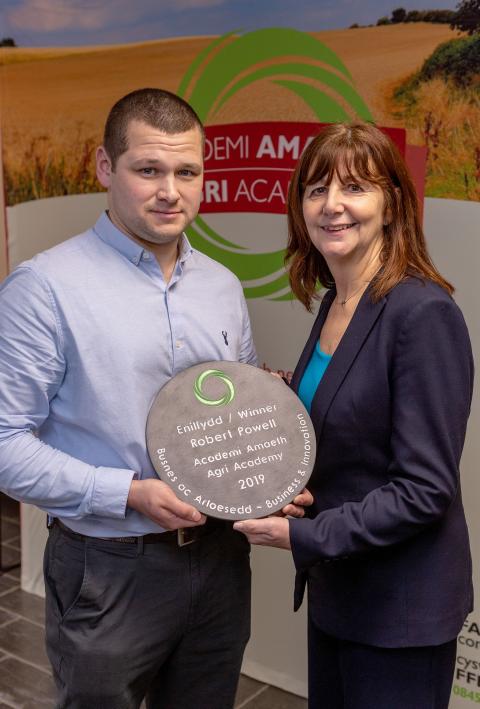 The Minister also announced that Robert Powell, a change manager with a major meat processing company, who farms at the family farm near Waunarlwyd, near Swansea, is the winner of this year’s Agri Academy Business & Innovation Programme challenge.

Robert, a graduate of Aberystwyth University where he read agriculture with business studies, has significantly developed the family business, which in recent years has expanded to more than double its original acreage. His determination to capitalise on any opportunities to increase efficiency and profitability at home by identifying additional streams of income, clearly stood him in good stead as he applied similar principles to this year’s Business and Innovation challenge.

This year’s challenge for the group of 12 candidates who recently returned from a fact-finding study visit to a range of successful rural enterprises in the Netherlands, was to produce a five-year business strategy for Sam Jones of Brookhouse Farm in Gloucestershire, whom they visited in the autumn.

Mr Jones, who in 2018 won the British Farming Awards’ ‘Sheep Innovator of the Year’, was delighted with Robert’s recommendations, which included diversifying into growing sunflowers including a ‘pick your own’ option and supplying seeds to the bird food industry as well as utilising the heat already produced from the existing biomass boilers to produce sunflower oil.  He also suggested creating a sunflower maze and providing horse riding tours.

“He was so concise and professional in all parts with the time allowed and his messages and ideas left me in no doubt what he was trying to install on my farm.

“I’ll be taking quite a few ideas from the whole Agri Academy group who, with no exception, gave me some brilliant ideas for the future planning of our farm.

“They are all a credit to the industry,” said Mr Jones.

Farming Connect, which is delivered by Menter a Busnes and Lantra, is funded by the European Agricultural Fund for Rural Development and Welsh Government.