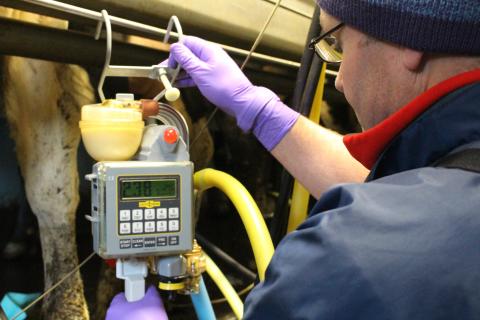 A series of small changes to the parlour look set to have a significant impact on the efficiency of milking at a Farming Connect Focus Site.

A project to improve pre-milking routines has recently started at Ffosyficer, Abercych, Boncath, with the aim of improving milk quality and reducing milking time, teat damage and mastitis cases. The enhanced milking routine will have an emphasis on milk let-down, calibrated equipment settings and protocol development.

On his first visit to the farm, dairy technology specialist Ian Ohnstad identified a 10% deviation between the milk yield being recorded by the in-line milk meters and the actual yield.

“My worry was that the cows were being fed on the basis of readings from incorrect meters, so we had to re-calibrate them to truly reflect the yield,” said Mr Ohnstad.

By accurately recording milk yield, feed for the 320-cow autumn calving herd could be adjusted to avoid under or over-feeding. The second issue identified was that the clusters were staying on the cow too long, leading to over-milking, so it was recommended to adjust the ACRs.

Nozzles on the disinfectant sprayers were replaced after they were found to be worn and not providing adequate coverage, and it was also suggested that the cows were sprayed for longer using a figure of eight motion to ensure more effective teat disinfection after milking.

“I also recommended trimming the milk tubes because if they are too long they pull down on the cluster leading to uneven weight distribution on the teats, so you are likely to get uneven milking and vacuum fluctuation,” added Mr Ohnstad. “The tube should come down from the line and have a very slight curve to the cluster on the cow, there should not be much left hanging down. The cluster will then sit better and the cow will milk out more evenly.”

For small cows or heifers, Mr Ohnstad suggested using a piece of tube that could be connected to the cluster as an extension. The final recommendation was to swap round the pre-milking routine of wiping with paper towels then stripping the cow.

“They were getting the teat nice and clean and then stripping it. To me it seemed sensible to reduce the risk of spreading bacteria or leaving some on the teat by stripping then wiping, so the last thing you do is leave the teat clean.

“The key message at this stage is to test and calibrate parlours. The recommendations are all really good things to consider, every single one will make a difference, no matter how small they seem.”