Targeted antibiotic use in combination with improved herd management is allowing a Welsh dairy farm to reduce its level of treatments with antimicrobials. 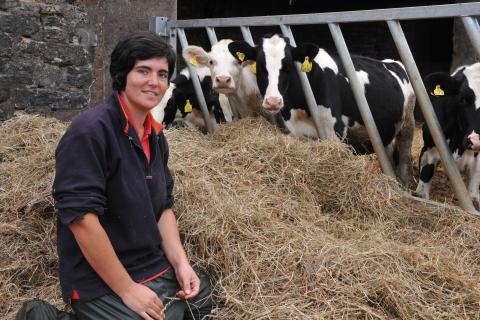 At drying off, Goldsland Farm at Wenvoe, Cardiff, uses antibiotics in less than 20% of the 200-cow Holstein and Dairy Shorthorn herd, opting instead for selective dry cow therapy (SDCT).

Abi Reader, a Farming Connect Focus Farmer, says SDCT, which was first implemented eight years ago, is dictated by milk recording data – teat sealant only is used on cows with a somatic cell count (SCC) of less than 200,000 cells/ml.

Despite the relatively high average herd SCC of 190,000 cells/ml when SDCT was first used, sealant-only at drying off was fully justified, she says, because mastitis issues were not centered on the dry and fresh cow periods.

Through her work as a Farming Connect Focus Farm, she has been working to improve this by addressing issues such as cow track improvement, reducing poaching around water tanks and restricting cubicle access during summer months, when cows at grass come into the sheds for milking and buffer feeding.

This all helps to reduce the probability of germs making contact with cow udders.

The Farming Connect project involved monitoring antibiotic use at the farm and benchmarking it with other dairy farms under the guidance of veterinary specialist Dr James Breen, of the University of Nottingham and Quality Milk Management Services Ltd (QMMS).

The review found that in five out of six years to 2016/17, usage was generally low; it was measured by mg/Population Corrected Unit (PCU) and found to be less than 15mg/PCU – target mg/PCU use in the UK dairy sector is 21 by the year 2020.

The highest use was in treating animals for lameness, but Ms Reader is addressing this by improving footbathing facilities and cow tracks.

Some of the 15 herds benchmarked for the Farming Connect study used significantly more than the national target, with mastitis management a key decision factor.

Reductions were made by drawing up protocols in conjunction with veterinary advice and running tests to ensure the right antibiotic was being used for the problem.

“We also looked more carefully at whether an antibiotic was needed in the first place,’’ Ms Reader explains.

A greater emphasis has been placed on using pain relief for all conditions including mastitis, lameness and calf scours.

Overall, the level of antibiotic usage at Goldsland Farm now puts it among the top 25% of UK herds with the least usage.

The business has achieved this by developing its own code of practice for all conditions and includes:

Other contributory factors in the reduction in usage include placing stone in gateways to prevent mastitis.

“Cows traipsing through muddy gateways are more at risk of picking up germs on their udder,’’ says Ms Reader.

Over the past eight years as she has sought to drive down antibiotic usage, Ms Reader says she has learnt that it is important to respond to what the cow needs.

“Don’t get overwhelmed by the pressures of reducing antibiotic usage and be in danger of not treating a condition appropriately,’’ she advises.

“Start gathering data, talk to your vet, learn and find out why you have the problems you do, get to the heart of it and make changes so you prevent the problem in the first place.

“Just focus on the worst problem first, don’t get bogged down.’’

Helen Ovens of ADAS, who jointly prepared the report into the study, says the clear message from this investigation is that dairy farmers must put measures in place that prevent disease and avoid the need to treat.

Although the preventative measures at Goldsland had added to the cost of production in the short term, they could be financially beneficial in the long term, Ms Ovens suggested.

“Financial savings will be made on the cost of drugs and reductions in animal loss, as well as increasing milk production.’’

Dr Breen advises milk producers to adopt protocols for appropriate use and to implement preventative strategies.

“Therefore, understanding the seasonality for mastitis cases, preventative treatment with anti-inflammatories, protocols for disease treatment and staff training will all help to prevent disease and avoid the need to treat with antimicrobials.’’

Ms Reader said the study had helped her to move towards a targeted antibiotic use regime, combined with better herd management.

The mastitis challenge, she suggests, has been environmental, including housing issues and a build-up of disease in grazing paddocks during the summer.

She has recently erected new cow housing with improved ventilation to support herd health and improvements are being made to the calf rearing shed, incorporating better ventilation for cleaner air to reduce pneumonia incidence.

Imogen Ward, Dairy Technical Officer at Farming Connect, says more efficient use of antimicrobials is becoming essential as a result of concerns regarding resistance to these drugs in both humans and animals.

“Farm vets and animal industry leaders have a key role to play by raising awareness of correct use of antimicrobials and implementing non-antimicrobial disease prevention on farm,’’ she says.

Pre-dip cows and wipe with an individual anesthetic, working from the teats furthest away to closest.

Individually wipe teat ends with cotton wool soaked in surgical spirit, nearest teat first; once one teat is wiped, tube and work from the closest teat to furthest away.

For cows identified as needing sealant only, administer sealant utilising the correct infusion technique, taking care not to massage into the udder by holding the top of the teat.

Apply tape to the tails of treated cows to ensure easy identification at calving.