Possible adaptations to farm-building infrastructure towards reducing emissions are varied. In hotter climates and during summer months, a significant amount of energy expenditure may be related to the cooling of building spaces. Adaptations which could assist in mitigating these expenditures include the use of solar reflective roofing materials as well as the planting of green facades on walls and roofs. Where roofing is concerned, initial research demonstrated the ability to achieve surface temperature reduction of up to 8°C due to up to 90% more energy being emitted by certain materials. It was also noted that the angle of the slope of the roof also had a significant impact on increasing solar reflectivity.

Whilst research into green facades is somewhat in its infancy, with experimental design issues and lack of standardised testing, initial urban experimentations suggested that green facades mitigate 5 - 10% of effects relating to increases in temperature. The above study, however, found a lack of significant evidence relating to green roofing. The cooling effects of green facades are achieved through direct shading of the building surface as well as evapotranspiration of plants having a cooling effect on their surroundings. Very limited research has been performed into the reverse effects of green facades during winter months or where improving heat-retention is concerned. One study cites slightly higher energy input requirements for heating green facade structures, however, it is also noted that in winter they do assist in preventing heat loss compared to bare walls at night or on cloudy or foggy days. It is likely that energy usage for heating is minimally increased due to greenery limiting solar gains during the day. Whilst the thermoregulation effects of green facades are interesting, there are further potential climate change mitigation factors to consider, such as the ability of vegetation to sequester carbon dioxide (CO2)as well as other pollutants. Green roofs demonstrate an even higher ability to sequester CO2 than green facades and additionally require less irrigation and maintenance. 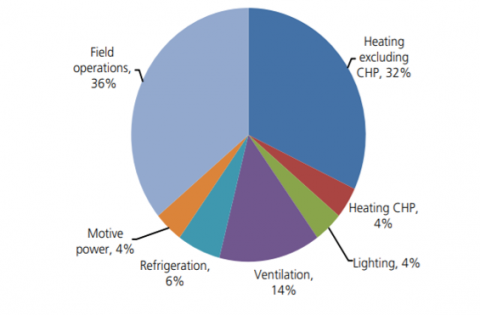 CHP systems offer a high potential gain when considering heating of agricultural buildings as through the process of combustion of feedstocks to produce electricity there is excess heat produced which can be captured rather than wasted. In traditional CHP systems, it is noted that there is up to a 30% reduction in carbon emissions. This could, however, be improved further through the growth of specific feedstock on-farm (or locally to reduce processing and transport GHG emissions) to power CHP units. In such systems, the emissions produced are considered carbon-neutral due to the feedstocks simply returning previously sequestered carbon to the atmosphere. High energy feedstocks such as miscanthus and willow could be grown for direct use or mixed farming systems or silvopastoral systems via the inclusion of fruit trees may add benefits. Alternative scenarios provide a consistent source of produce requiring regular coppicing for utilisation in CHP units as well as having significant benefits in climate control associated with tree planting. Similarly, coppicing of maintained hedgerows and any implemented buffer strips could also bolster feedstocks for CHP units.

Another method of producing fuel which could be directly utilised towards building heat or vehicle power is on-site anaerobic digestion. These systems take agricultural waste biomass, including manure and green waste, and produce biogas, an ‘anaerobic cake’  and a nutrient rich liquid both of which can be utilised on-farm as fertilisers. Studies have also suggested that combining anaerobic digestion produced biogas with specific CHP units (internal combustion engine ICE), can provide both heating and electricity with high economic savings and significant reductions in CO2 emissions on farms. 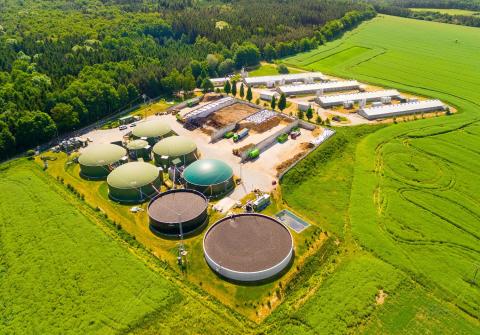 Solar collectors also offer a means of providing some heat to agricultural buildings and work via conversion of solar energy into a heat store of some form (water or air). Whilst these appear largely to have been assessed for their ability to be used in the drying of agricultural produce, there are also some indications of potential use in the direct heating of livestock spaces in colder climates.

Incorporation of heat exchanger technologies can have benefits across multiple agricultural areas. These include direct use of heat from power plants which produce hot wastewater. It has been suggested that integrating heat exchange systems from hot wastewaters with extensive heated greenhouse systems can reduce energy costs of heating up to 87% and reduce CO2 emissions by up to 62%. In the UK plans are underway to build two of these expansive greenhouses in Norfolk and Suffolk with similar sustainable efficient systems being implemented by companies utilising large greenhouse systems such as British Sugar. Other systems include earth air heat exchangers which can cool greenhouse systems in summer and heat them in winter. Conductive cooling (via buried heat exchangers) is a potential route to alleviate heat stress in high lactation dairy operations, as well as heat exchangers in the pasteurisation and cooling storage procedures of milk.

Vertical farming is an innovative use of agricultural buildings which is thought to present potential economic and environmental advantages. It has been suggested that, due to no nutrients being lost to soil and water systems, reduced water consumption, reduced land/space requirement, no pest interactions and improved year-round crop production that vertical farming offers significant potential as a crop production system. A study modelling such systems suggest that by utilising technologies such as renewable energy sources, including solar panels and heat exchangers and low power LED bulbs, that these buildings offer high potential as a sustainable route towards providing produce. A caveat to consider, however, is that, for highest efficiency, these systems need to be built close to high population regions to minimise the climate costs of transportation further. Finally, across multiple sectors; from crop storage, greenhouses to livestock housing, a noted area for potential energy saving is the correct and improved level of insulation applied to structures offering potential savings of 5 - 11%. 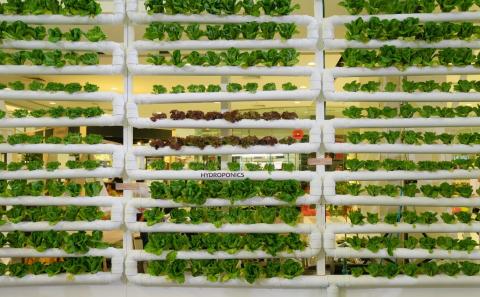 Whilst a steady decrease in the volume of fuel used in the agricultural sector has been observed since 1997 there are still further mitigation strategies which can be introduced. One developing sector which may have the potential to reduce GHG emissions associated with current machinery in agriculture is precision agricultural technology alternatives. These can include: agri-bots which can perform automated weeding and crop maintenance, self/assisted steering technologies which can improve the efficiency of agricultural vehicle fuel use, therefore reducing emissions, Unmanned Aerial Vehicles (UAVs) to monitor crops, pastures and livestock remotely and field sensors to monitor field conditions remotely (such as temperature and moisture levels of soil or silage). All such technologies tend to utilise lower energy inputs and direct electricity inputs (rather than fossil fuels) which could be produced in a net neutral manner either via CHP systems or renewables. Furthermore, remote monitoring via UAVs and in-situ sensors could lead to less labour and GHGs from agricultural vehicles, being expended via visual inspection routines and agri-bots are suggested to utilise less or no pesticides and have a less detrimental impact on soil compaction. Where remote sensors are concerned, true benefits may well require innovations for long-distance data transfer. In potentially signal restricted areas, a transfer could be achieved via LoRaWAN and similar technologies. Other areas for consideration include waste heat recovery from agricultural vehicles as well as the expansion of the availability of electric agricultural vehicles.

Mitigation strategies for food supply transport include the improvement of infrastructure localisation. If this was performed strategically then reduced transportation leads to less GHG being emitted. Improved organisation of bulk produce transport from various farms, rather than multiple smaller transportation trips would equally contribute to lower emissions. Evaluations of these strategies are being performed and optimised using models, particularly in the cold supply chain sector due to carbon tax regulations. There are several suggested mitigations relating to refrigerated food transport emissions, including the application of waste heat recovery, as with agricultural vehicles, to power refrigerant units. Alternative refrigeration technologies which could reduce emissions include absorption or adsorption refrigerant systems, thermoelectric cooling (which whilst still utilising energy lacks refrigerant leakage or direct fossil fuel combustion emissions and can be reversed to supply either heat or cooling) and air cycle refrigeration. Finally, general electrification of food freight vehicles has been modelled to achieve between 26 – 96% reduction of GHGs emissions in urban areas where distances travelled are manageable. 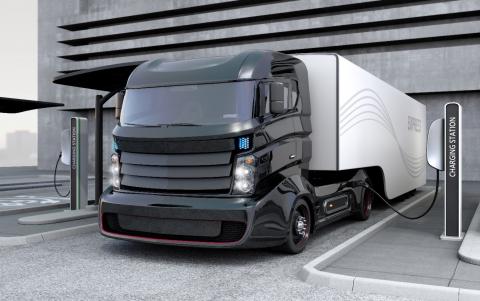 Within food supply processing there are several mitigation steps which could be employed to reduce energy use and emissions. Following on from emissions reductions from CHP system (which can also play a role in processing units of up to 35% reductions in energy used), the incorporation of a refrigerant system (often absorption refrigeration) can turn systems into ‘Tri-generation’ or combined heat power and refrigeration (CHPR) systems. These can reduce GHG emissions by fully converting up 90% of the energy from fuel input into usable outputs with reduced waste. Other mitigation can include improved cooling techniques for produce (cold fluid immersion for freezing), use of anaerobic digestion for biogas production, air cycle refrigeration and sonic wave processing (for heating liquors in brewing industries with up to 30% energy savings).

Waste mitigations from both the food supply chain as a whole and agricultural waste specifically is a complicated issue. An immediate reduction strategy which is possible, both in agriculture and food packaging, with regards to plastics is the incorporation of biodegradable plastic packaging. Alongside this option, a downscaling in the level of packaging can also be beneficial in reducing waste and initial processing energy required to produce packaging. Largely, however, waste reduction with regards to food requires a major attitude shift towards utilising fresh produce efficiently and a reduction in highly packaged processed food and ready meals.

Agricultural waste has specific issues with regards to recycling as there are only limited plants capable of processing agricultural plastics in the UK and these often cannot accept contaminated plastics. Mitigations can also include schemes such as the red tractor assurance which has checks to encourage those seeking accreditation to keep plastic in a manner that will allow its eventual re-use or recycling. Recent studies have also utilised geographic information systems (GIS) to map agricultural plastic use in an attempt to provide efficiently placed waste collection centres which could improve recycling uptake. Alongside plastic wastes, other agricultural wastes include agrochemicals, oils and oil drums, batteries and carcasses. For many farms, a mitigation strategy of interest could be for farms to combine waste, in order to have sufficient quantities to justify the treatments required.

One common mitigation for GHG production, on the whole, is the use of renewable energies including solar (in various forms), geothermal, ground source heat pumps, wind, hydroelectric and biomass energy. Whilst these all have the potential to displace emissions otherwise associated with fossil fuels, either via action as direct heat sources or via electricity production, they often rely on highly specific conditions. Analysis in 2007 demonstrated that the most efficient renewable source with regards to direct farm application across the majority of agricultural sectors, was through biomass energy, with up to 3 x more fossil fuel displacement compared to other renewables. Certain farms, however, with the correct conditions may see significant benefits from other renewable sources.

One direct fuel alternative was previously discussed with regards to biogas from anaerobic digesters. Another alternate route for producing fuel is through the growth of bioenergy crops for the production of biofuels such as biodiesel. These crops sequester CO2 from the atmosphere during growth and are therefore carbon neutral upon combustion.

Agricultural infrastructure is vital for the operation of the sector as a whole, and as such, major overhauls within its structure are difficult to perform. Whilst the sector functions successfully in the current environment, it is clear that changes will be required to meet not only increased consumer demand but also sector targets for reducing climate change emissions. As several aspects of agricultural and farm level infrastructure are known to be significant sources of emissions, these also offer potential targets for innovative adaptation and mitigation strategies to move agriculture towards a more sustainable future.