Air pollution from human activities presents a major challenge for most nations on earth. It can originate from multiple sources, including transport and industry, and is most commonly associated with the by-products of fuel combustion. Agricultural activities contribute to air pollution indirectly through the emission of ammonia, which combines in the atmosphere with other pollutant materials from a range of sources to become fine particulate matter. Particulate matter is an air pollutant material of particular concern as it can cause significant impact to human health and wellbeing.

Nitrogen (N) emissions in the form of ammonia (NH3) originate primarily from agricultural activities (93% of emissions in Wales), particularly from livestock systems and fertiliser management. Reducing ammonia emission is an essential objective for the agricultural industry, both due to the influence this has on air pollution and population health, and also due to the environmental impact caused by ammonia pollution. Additionally, N is a valuable production material and enhancing N use efficiencies and reducing environmental losses is a core future farming strategy. Improving resource utilisation and precision in terms of nutrient management acts to improve farm business efficiency and is necessary to increase future sustainability within the agricultural sector.

Ammonia is produced at numerous stages of agricultural production. Emissions occur directly from animal waste, then subsequently from the waste during storage or during land application. Ammonia emission can also result from the use of non-organic fertilisers. Numerous management approaches exist which can limit the emission of ammonia, from every stage where losses occur. In this article we will consider actions which can be taken to reduce ammonia output from manure storage and fertiliser management.

A key strategy for reducing ammonia emissions from manure storage is to reduce the amount of manure surface area in contact with the air. Slurry lagoons often have large surface areas relative to tank storage options, which can allow air flow across the surface and increase emission rates. Storage containers which are designed to be deeper/taller and narrower, have less surface and therefore less emission potential. Replacing slurry lagoons with storage tanks or silos is an effective strategy for reducing emissions, however this will likely require investment.

Storage tanks and silos can have ammonia emission potentials reduced further by the incorporation of a roof or lid. This should be well sealed, but must still allow venting to avoid the accumulation of potentially flammable gases (at least in the absence of gas extraction or capture technology). The primary goal of any top cover is to minimise air exchange rather than to trap gaseous emissions, thus even canvas or tent-like covers will be sufficient to reduce emissions.

For existing slurry lagoons, the use of floating covers or the formation of a sufficiently thick surface crust can reduce ammonia emissions. Options trialled for floating cover materials are varied and include natural materials (straw, peat, clay granules, light expanded clay aggregates, rape oil, and others) and synthetic options (geotextile, plastic, rubber, canvas).

The majority of cover types tested have reduced emissions overall when compared to uncovered control options, though some cover materials could present subsequent management challenges, and may affect slurry homogenization and the ease of subsequent spreading. Covering options, such as plastic sheeting, are also effective at reducing ammonia emissions from stores of farmyard (solid) manure.

Allowing the formation of a crust on slurry pits is also an effective strategy, which can reduce emissions by around 50%. Crusts will form naturally as long as the disturbance to the slurry remains low and dry matter content is >1%. Low disturbance can be achieved by limiting the amount of stirring and by introducing new slurry beneath the surface. Allowing crusts to form is also an extremely cost effective approach, but this is only an option where slurries do not require frequent mixing, such as in scenarios where regular land application is required.

Where covering of slurry stores or crust formation is not possible, then direct treatment of slurry material can be an option. Acidification of slurry to pH values less than 6 can reduce ammonia emission significantly (by ~75%). This approach can simultaneously reduce methane emissions from slurry, which is an additional production goal. The positive influence of acidification on ammonia emissions can also carry-over to the land application stage, reducing emissions in the field after spreading, and may increase the fertiliser value of slurry. However, the long-term influence of acidified slurry on soil and soil based processes is as yet unclear. In addition, the handling of strong acid material presents certain health and safety challenges for farm workers, and should be considered accordingly. 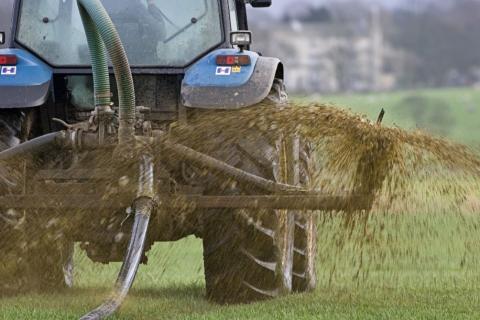 As with other ammonia emission reduction measures, the primary goal for limiting emissions at the land application stage is to reduce the amount of air-manure contact time. Broadcast spreading, where fertiliser is spread then left without incorporation, allows manure material to interact with the atmosphere on the soil surface for potentially long periods. This can result in significant rates of ammonia volatilisation and emission. Several alternative spreading techniques are available, which can limit atmospheric exposure of manure and therefore reduce ammonia emission.

Band spreading, using either a trailing hose or trailing shoe, aims to get slurry material directly onto the soil surface by parting any herbage layer or crop residue, rather than spreading on top of vegetation canopies. This approach offers little or no ground penetration, but reduces atmospheric interaction by placing slurry beneath the vegetation layer, which increases wind resistance and shade from solar radiation. As such, the taller the crop 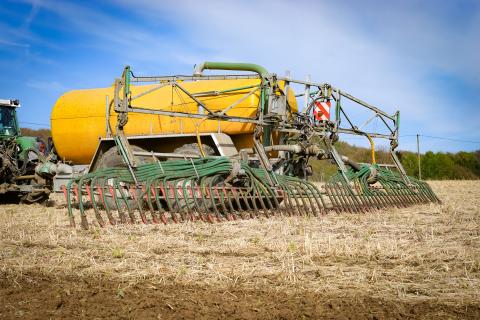 canopy, the greater the emission reduction potential. Trailing shoe is reported to be more efficient than the trailing hose, due to better vegetation

penetration with less contamination, particularly in taller vegetation canopies. But for both systems hose-pipes can become clogged if slurries contain large particulates, or if dry matter content of the slurry is above 7-10%.

Slurry can also be applied beneath the surface layer of soil using direct injection techniques. There are two main approaches for direct injection, open slot and closed slot. In open slot systems, a shallow vertical slot (up to 50 mm) is cut into the soil surface and then filled with slurry up to the surface level. Filling must not exceed soil surface levels otherwise the efficiency of this approach will be compromised. Caution is also advised with application

on sloping ground, as the furrow slots may subsequently become conduits for water runoff, increasing environmental losses. In closed slot systems, slots are sealed once filled with slurry by pressing with wheels or rollers. In this approach, slot depth can be varied to some degree to allow for larger amount of slurry injection, but this is dependent on the soil type and climatic conditions. Closed slot is the most efficient in terms of ammonia emission reduction potential (80-90%), but it is also the most challenging in terms of application difficulty. There is a high potential for herbage damage in grassland and this approach may be restricted to pre-sowing only in arable crops due to the likelihood of physical impact. An increased risk of leaching may also be likely. 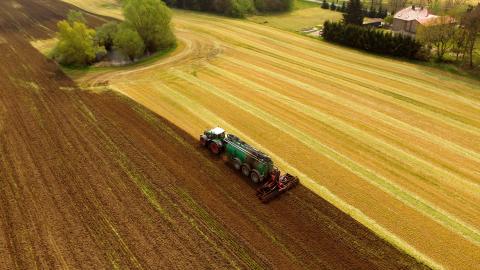 Where surface spreading is the only available option, then subsequent soil incorporation may be a suitable option. This can be achieved by ploughing or shallow cultivation, but as such is not appropriate for all situations. If this approach is suitable, then speed of incorporation after spreading is a key factor for achieving emission reductions. Immediate incorporation can reduce emissions by up to 90%, but this efficiency decreases rapidly with time (4hrs - <60%, 12 hrs <50%, 24 hrs <30% reductions). The degree of efficiency subject to time is also variable depending on climatic conditions at the time of spreading, as warmer conditions will increase the potential for ammonia volatilisation. This is also a factor more generally, and applications should always be timed to coincide with appropriate conditions. Ammonia emissions will be highest in warm, dry, windy conditions, therefore cool, humid conditions are optimum for all types of application.

The choice of fertiliser type can also have a large impact on ammonia emissions. Urea-based fertilisers have a high emission potential, due to the effects of rapid hydrolysis, and consequent rises in pH locally. Ammonia emissions from urea-N are much larger than from ammonium nitrate, so switching to ammonium nitrate would be effective action for reducing ammonia output, but may conversely result in higher levels of N2O emission.

Where urea is used the application of urease inhibitors can limit emissions by slowing the rate of hydrolysis and the conversion of urea to ammonium carbonate. This limits the reductions of acidity, reducing the suitability of conditions supporting ammonia volatilisation. Slowing hydrolysis may also increase the amount of urea incorporated into soil before losses occur.

Ammonia emissions from agriculture are currently the primary source of ammonia pollution in Wales and the wider UK. Reducing the output of ammonia can help to reduce air pollution levels nationally, and can reduce the environmental impact of nitrogen pollution.

Numerous approaches exist which can limit the emission of ammonia from farming systems, through modification of existing practices. In general, the principal goal underlying each intervention highlighted above, is to reduce the amount of interaction between manure or fertiliser material and the atmosphere, as contact with the air is the primary driver of emission.

The application of many of the above approaches will be based on compromises between difficulty in undertaking, cost of intervention, and opportunity for reduction. Typically, the approaches with the highest potential for reduction will incur either the largest amount of investment, or the highest degree of difficulty in implementation. Yet, increased precision and efficiency may also result in financial benefits from improving yield and yield consistency. Thus, the benefits to farm businesses may be broader than simply the reduction of potential for air pollution and environmental impact.