In line with European Commission regulations, beef farmers in Wales are currently paid according to yield and fat cover, with no consideration for eating quality. Inconsistencies in eating quality, hence the failure to match consumer expectation with experience may have been responsible for the decline in beef consumption in the UK, Europe, the USA and Australia. With consumers being the main drivers of value within the beef supply chain it is necessary for the Welsh beef industry to remain competitive against other animal-based proteins, by adopting a reliable, replicable grading system which considers the consumers’ eating experience. The introduction of a Meat Standards Wales (MSW) grading system, which is based on the Meat Standards Australia (MSA) model, has the potential to improve the eating quality, and importantly, the consistency of eating quality, and ultimately increase the value of Welsh beef.

The main beef grading system in use in the UK and Europe is the EUROP system, introduced in 1981 under the European Commission. Grading is done at the end of the slaughter line just before chilling. The EUROP system evaluates carcase conformation and fat cover with six conformation classes (S=superior, E=excellent, U=very good, R= good, O=fair, P=poor) and 5 fat cover classes (1=low, 2=slight, 3=average, 4=high, 5=very high) respectively. The aim of the EUROP system is to describe carcasses for those involved in slaughtering, cutting, distribution and retailing according to terms relevant to trading. The EUROP system is a good indicator of yield but has the limitation of not being linked at all to the consumers’ eating quality experience.

While EUROP is the standard system of evaluating beef for pricing and will remain so as a minimum legal requirement in the UK in the foreseeable future, there are many different quality assurance schemes and processes in Europe that are applied in addition to this. These schemes take advantage of consumers’ willingness to pay a premium for foods associated with a particular geographic or production system origin. These schemes include European Commission controlled labels such as “Protected Designation of Origin (PDO)”, “Traditional Speciality Guaranteed (TSG)”, “Protected Geographical Indication (PGI)” and Organic as well as other national schemes such as ‘’ Label rouge’’ from France and ‘’Red-Tractor’’ in the UK with production system descriptors such as “free range” or “grass-fed’’ also being used by retailers. The United Kingdom (UK) is currently preparing to exit the European Union (Brexit) but trade between the UK and Europe will no doubt continue. This means that as a minimum, the UK will likely continue to use the European Union legal grading system (EUROP) and probably quality assurance schemes post Brexit. Welsh beef was granted PGI status by the European Union in 2002, which is of enormous economic importance to the Welsh red meat industry, as it identifies the origin and unique production qualities of Welsh beef.

The objectives of PGI:

The majority of beef grading systems around the world are yield focused and therefore tailored for meat traders, not consumers. These grading systems may either be compulsory or voluntary. The European (EUROP), Canadian, United States of America (USDA), South Korean (Korea), Japanese (JMGA) and South African (SA) grading systems are compulsory. In Australia there is a voluntary chiller assessment system AUS-MEAT which involves the measurement of traits such as carcass conformation, marbling, ossification and meat colour. The AUS-MEAT chiller assessment data feeds into a voluntary grading system (MSA system in Australia) that does include eating quality prediction. Similar voluntary systems are in operation in New Zealand (e.g. Silver Fern Farms quality guarantee in New Zealand). The EUROP and SA grading systems are focused on yield and fat cover and classify carcasses based on carcass weight and conformation as well fat cover. For Canada, USDA, Korea and JMGA, eating quality is inferred from subjective assessments of intra-muscular fat content (marbling) and carcass maturity (ossification score and dentition). These inferences are made based on known scientific associations between the observed characteristics with eating quality. The assessments may be wholly visual or make use of standards, such as the colour cards used in the AUS-MEAT chiller assessment which are also used in the MSA grading system. The South African (SA) and AUS-MEAT grading systems use dentition to determine age or maturity whilst the MSA, USDA, Canadian and Korean systems use ossification scores. Ossification scores are based on visual assessment of the degree of change from cartilage into bone between the spinal processes which increases with age (Figure 1). Additionally, other characteristics such as meat texture, meat colour and lean maturity are used in the MSA, USDA, AUS-MEAT, Canadian, Korean and JMGA systems. A summary of the grading systems discussed here is given in Table 1.

The New Zealand meat sector differs from other global meat sectors in that there is no cooperation between industry and government in the development of quality assurance schemes. Instead industry is fragmented into individual firms developing their own quality programmes to meet the needs and requests of their customers. The industry is dominated by four major meat processing companies including Richmond Farms and Silver Fern Farms, which have their own quality assurance schemes. 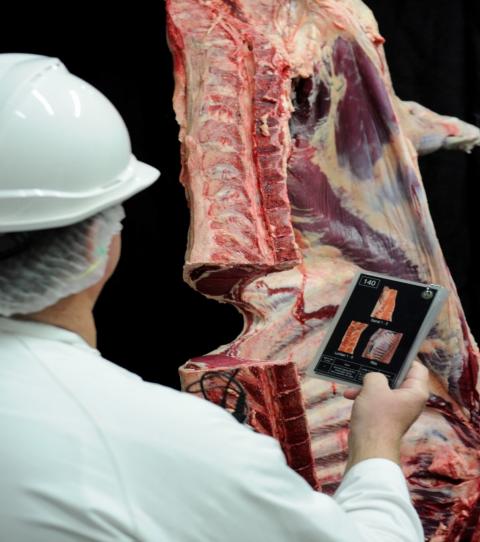 Table 1. Principal components of selected beef classification and grading schemes in selected countries around the world (Adopted from Polkinghorne and Thompson, 2010) 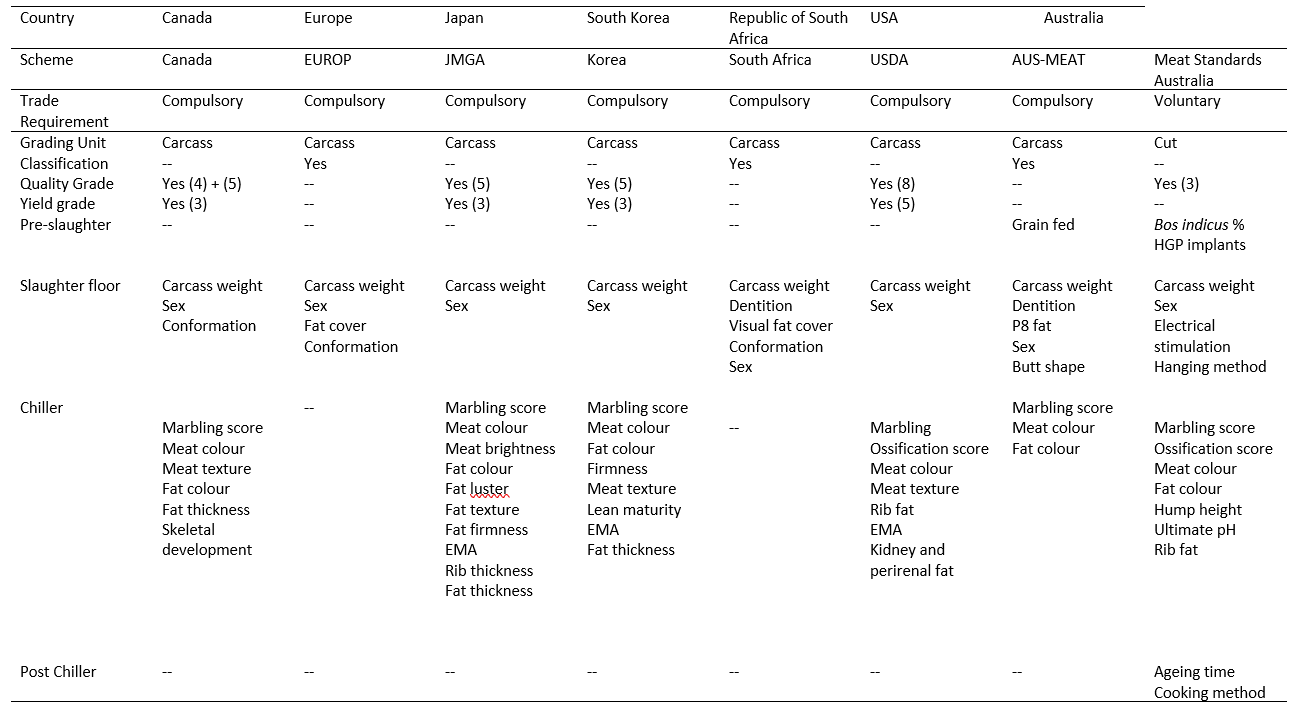 Contrasts and comparisons of the USDA and MSA grading systems

In the USDA system, physiological maturity is used to account for the effects of maturity on beef tenderness. Meat tenderness decreases as animals get older, which results from increased toughening of collagen. The five maturity classifications are designated A to E and the approximate ages for each group are shown below:

Within each physiological maturity class (determined by ossification) the principal determinant of beef quality grade is the degree of marbling using the rib eye (longissimus dorsi, complexus and spinalis muscles) at the 12th–13th rib interface as an indicator muscle. There are 4 main grades: prime, choice, select and standard and a further 4 lower grades: commercial, utility, cutter and canner. Each of the four main grades is further divided into 3 which are in turn discriminated by dividing each marbling degree into 100 sub-units, although marbling scores are generally discussed in tenths within each degree of marbling. The different beef grades are used to reflect eating quality with prime expected to have the highest eating quality while canner is expected to have the lowest eating quality. The top 4 grades best predict tenderness of the middle meats (rib and loin) which are usually cooked with dry heat (e.g. broiling, grilling, roasting). They are however less useful predictors of tenderness of meats cooked with moist heat.

Both the MSA and USDA quality grading system are determined by visual evaluation of the size, shape and ossification of the bones and cartilages in the carcass with further evaluation of the colour and texture of the ribeye muscle. Another important feature of the USDA system is the reliance of the grading on the gender or type of animal. There are gender and type limitations with bulls not being quality graded, cows never being graded prime and bullocks being graded separately from steers, cows and heifers.

Figure 2. Consumer taste testing of beef as part of the BeefQ project

The MSA system, on the other hand, only has three quality grades, and any beef falling outside of these grades is classed as unsatisfactory. A further point of difference between these two grading systems is that while the USDA system relies on the degree of marbling determined on the ribeye to grade the entire carcass the MSA is a cuts based grading system and does not assign a single grade to an entire carcass. Instead, the MSA assigns grades to individual cuts or muscles according to cooking method. The core of the MSA are the critical control points (CCPs) that have been selected on the basis of extensive consumer testing. Included among the CCPs, which encompass the production, pre-slaughter, processing and value-adding sectors of the beef supply chain, are breed, sex, hormonal growth promotants, pH and temperature decline window, alternative carcass suspension, aging, and method of cooking. The interaction of these CCPs along with ossification score and MSA marbling score, are calculated using a computerized prediction model to give a single meat quality score with points ranging from 0 to 100 from 4 consumer variables: tenderness, juiciness, like flavour and overall liking.

While USDA grading uses colour in conjunction with ossification score to determine physiological maturity, MSA uses colour as a sensory variable with the cut off level set by processors according to their customers’ preferences. Due to the reliance on marbling for grade classification the USDA grading system will result in cattle from different productions systems, breeds and sex being placed in different quality grades. As such carcasses from feedlot cattle and early-maturing breeds are more likely to be classed as prime while those from pasture cattle, late-maturing and double muscled breeds have lower likelihood of being classed as prime. On the other hand, the MSA system, taking into consideration the interactions between beef production, processing, value adding systems and cooking methods on the palatability of meat, allows for cuts from alternative process-product combinations to achieve a similar grade. The heavy reliance of the USDA grading system on marbling limits its applicability in markets with a preference for lean meat, whereas the MSA system is dynamic which allows for adjustments to be made in the traits used for calculating the grades and can therefore be adapted to a wide range of markets.

The MSW will be an opt-in grading system that follows a product from farm to fork, designed to ensure that the consumers’ eating experience always meets their expectations. This is particularly important in the current environment where beef consumption is on the decline due to competition from other more consistent or cheaper animal proteins (particularly chicken), veganism, the links between processed meat consumption and diseases such as cancer and heart diseases among other issues.  While the EUROP classification system is required for trade a consumer focused valuation system is also needed in order to increase the value in the supply chain and improve the consistency or eating quality of Welsh beef. There are alternative grading systems in use elsewhere in the world (e.g USDA and MSA) but there is need for an integrated system that takes a farm to fork approach to fit in with the PGI branding currently used for Welsh beef. Therefore, BeefQ is developing a voluntary grading system based on the MSA system which could be applied in addition to EUROP, which has adapted to the characteristics of the Welsh beef supply chain and the intended market.