Tracking technologies have seen significant development and increased use in recent times, with global navigation satellite system (GNSS) units (of which GPS – global positioning system is one type) common in our day to day lives via phones, smart-watches and cars. Due to the enhanced ease with which we can perform tracking it comes as no surprise that the agricultural sector has developed an interest in using this technology in a variety of ways. Whilst GNSS is more regularly used in the accurate mapping of fields and farms for incorporation of data into geographic information system (GIS) frameworks as well as in assisting autosteer/full automation in tractors (improving harvest yields and fuel efficiencies) it has also been developed for monitoring livestock. Whilst initial hurdles to use included accuracy of results, physical interference of signals (tree/building cover) and battery power demands many barriers have been overcome through a variety of advances. With technology in agriculture increasingly common, several systems already utilise some form of animal tracking whether that be through GPS, or indoor systems, via signal triangulation or ID tag receiver interactions. Systems such as SMARTBOW and Afimilk all have elements of indoor tracking, however, outdoor tracking systems are relatively less commercially available particularly for lower value livestock and for considerations of extensive grazing scenarios. 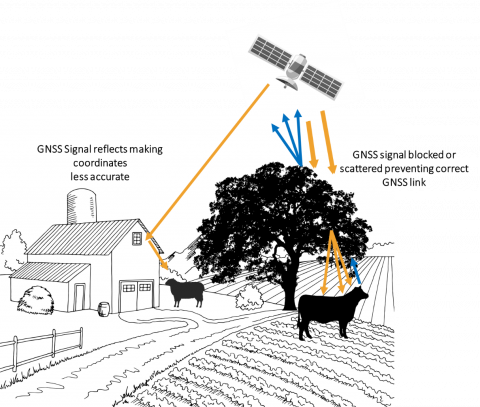 Extensive systems are a potential area where tracking technologies could play important roles. Many extensive systems range over very large areas making monitoring livestock labour intensive, inefficient and in some cases even dangerous. Extensive environments tend to have higher proportions of harsh environments and difficult to access areas where physical observation of livestock becomes a challenge. Despite this clear technology potential, extensive livestock systems lag behind other farming systems in the adoption of precision technologies, likely due to increased challenges in their application in these situations.

A known complication of extensive livestock grazing is in locating animals for collection, monitoring and security purposes. Knowing the exact locations of your livestock from a herding perspective can be a massive bonus as it can reduce labour demands by taking the guesswork out of gathering extensively grazing flocks. This is increasingly relevant where mountain access is difficult or in large rangelands such as Australia where often helicopters are hired to perform this task. Security is a concern as there has been an upsurge in livestock thefts, particularly of sheep, in the UK and Ireland in recent years, with organised criminal groups taking entire flocks. The problem is such that an estimated £2.3 million worth of animals were stolen from UK farms in 2020. GNSS could be a method for alerting farmers to unauthorised movement of animals from the farm/field, with live systems allowing immediate alerting of the police. Some commercial systems are already available for this such as dual-purpose security and health considerations collars for cattle from SmarterTechnologies.

Many implications on behaviour can be made by assessing patterns of animal movement over time, a value which GPS collects, however, intervals at which the GPS points are taken are known to be an important factor in this. By taking measurements into models, changes in behaviour can be found compared to norms established per animal (or per species standard results). Examples of health issues and behaviours where GNSS data has been demonstrated to have potential include;

It is important to note that a huge number of studies for health-related diagnoses also highlight the value of including sensors inbuilt alongside GNSS systems particularly movements based sensors (such as accelerometers) which are known to provide important data for diagnosis of diseases including lameness and are already utilised in commercially available systems such as Moocall and ICETAG/iCEQUBE.

Accurately managing extensive grasslands whilst avoiding under or overgrazing issues and degradation can be a challenge. Monitoring large areas makes traditional observations more costly in both labour and other factors, however, GNSS technologies can assist in this. Studies of sheep grazing for example have demonstrated that feed intake distributions can be assessed to facilitate improved rotational grazing strategies and sustainably increased stocking levels. Equally, it has been suggested that GNSS tracking could help to select animals for targeted breeding of desired traits to improve extensive grazing productivity. Furthermore, improved fertilisation strategies can be developed and combined with targeted rotational grazing by understanding animal grazing pressures and preferences of available forage. Grazing and animal management can also be directly impacted by GNSS via practices such as virtual fencing which if set up correctly can allow for easy low-labour control of rotation patterns in areas where the infrastructure has been applied.

One aspect of animal grazing which previously has been more of an issue on common land or where conservational grazing of reserves or national parks occurs is the ability to assess the environmental impact. GNSS systems have been utilised previously alongside satellite or remote imagery to more accurately manage livestock grazing patterns improving conservation and regeneration of biodiversity hotspots. This is increasingly relevant with new agricultural focuses on sustainable environmentally considerate farming. 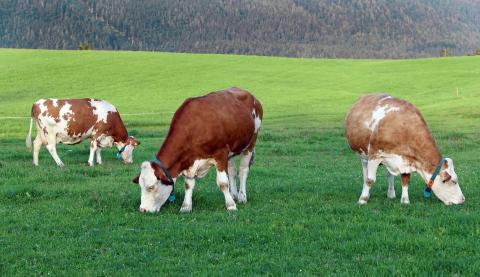 GPS tracking of livestock can play roles in the biosecurity of transmittable diseases. Having a record of which animals have interacted closely together could help to improve the outcomes of targeted treatments and quarantine regimes and allow farmers, within reason, to exclude certain animals due to a complete lack of interaction with other diseased individuals. Virtual fencing could play a role in reducing the scab parasite where fence rubbing is a known transmission point for the disease. Furthermore, if utilised and developed correctly virtual fencing could allow for controlled outdoor quarantine of risk animals grazing alternative rotational patterns away from the rest of the herd without having to maintain dedicated quarantine zones where pasture management can be more of a concern.

GNSS devices, whilst reduced in price and far more affordable than they have ever been, represent an investment cost for farmers. This leads to a debate as to whether the cost of tracking each animal is worthwhile and, in some instances, leads to a select few animals within a herd being tracked and assumptions made for the total herd based on these individuals. As a strategy, this can be beneficial above a total lack of tracking, however, several projects have suggested this data is not representative. Considering “why you have chosen to track your livestock” is also key, as elements such as animal health predictions, security and theft and ease of animal retrieval for extensive systems require that each animal be monitored.

A major consideration with extensive animal tracking is the collection of the data. For data to be live (or as close to live as possible) systems need to transmit frequently and over large distances either directly, or via cloud-based internet access. This means that on-animal systems must either have both a GNSS unit as well as a network transmission unit inbuilt (such as a phone SMS card), increasing the power demand and cost of the tag/collar used, or they must have a more local transmission system for data to be collected by a receiver unit before being passed on. The second option is preferable as it reduces costs, reduces reliance on the availability of network access (where rural extensive grazing areas often overlap with dead zones in mobile network coverage) and reduces the power consumption required (meaning tags or collars need to be changed after several months or years rather than every few weeks or months). Other options to reduce costs and allow coverage of entire flocks have been proposed where a few individuals have active GNSS based collars (requiring more battery power) and other herd members have Bluetooth (or equivalent lower power short distance transmission technology) tags that signal the GNSS collar to determine rough distance-based locations.

Currently, as part of Farming Connect's European Innovation Partnership Wales projects extensive grazing tracking systems are utilising a long-distance low power wireless area network (LPWAN) technology as their system to receive signals from animal devices, due to the large geographic area these signals can cover (15 - 40 km). The LPWAN receiver can be located in an area where it either has direct cabled internet access (usually on the central farm) or in a strong mobile network signal to allow regular data transmission. The power demand for transmitting data is taken on by the static receiver which can be directly powered or more easily powered via renewable energy sources such as solar.

Other data transfer options include ‘data mules’  (mobile signal receivers attached to drones or agricultural vehicles) to collect the data via physical proximity to the on-animal tags/collars. Whilst such systems have a lag from having to actively collect the data they can still be useful for evaluating management trends and could combine well with drone technologies which can more easily traverse extensive grazing habitats quickly.

When considering GNSS for security and theft some aspects have yet to be fully considered. Collars or tags are visible on animals and as such can be removed by criminals as the awareness of the technology becomes more common. Removal of a collar or tag that alerts of theft only when it moves away from farm GPS coordinates will as such become inert and require backup considerations (alerts if units are tampered with). Furthermore, the technology itself may have sufficient value to warrant theft of the collar or tags for resale rather than or as well as the livestock itself (as has been seen with GPS units being targeted for theft from agricultural vehicles). Furthermore, GNSS and other signals can be affected by electrically conductive materials and method can be applied to block or skew transmission during a theft.

Livestock tracking offers a lot of potential benefits based on research evidence and theory. However, like many precision livestock technologies, it is less well understood how economically and practically viable these technologies will be. Very few studies found sought to analyse the benefits of implementing GNSS related livestock management routines and much of the current research involves optimising standards for their use and most accurate configurations for their data transmissions to balance data/battery demands with the precision of results. More on-farm applications need to be performed to have a better understanding of the potential of these technologies to more fully advise and encourage farmers of their use. Despite this, considering that collar units have dropped from £1000 - £2000 per collar to £200 or less over the last 10 – 20 years, a continued trend could make their widescale use far more viable.