Internet access has increasingly shifted away from being a commodity to becoming a necessity with implications that access should be a basic human right in the future. Consistent improvements in UK wide internet access infrastructure has led to 96% of households in the UK having internet access as of February 2020. Whilst discussing figures in this way appears positive, based on 2019 household number figures, the remaining 4% equates to 1.1 million households which still lack any kind of internet access. Interestingly the figures for such high levels of internet access by households were also helmed by online survey data collection (with telephone interviews being secondary), this in itself may bias estimations despite the ‘Opinions and Lifestyle Survey’ suggesting it would “have only minimal impact”. Alongside gaps in internet access via traditional infrastructure, where internet access is available Ofcom considers ‘Decent’ internet speeds to be at least 10 Mbps download and 1 Mbps upload which is only marginally faster than speeds previously offered by 3G mobile internet, a technology that was superseded over 8 years ago. Furthermore, there is a significant amount of evidence that suggests a clear divide in digital access between rural and non-rural areas despite generally higher needs for modern communication in these areas due to higher numbers of remote small/home businesses’.

Using Ceredigion as an example rural constituency, the majority of its areas are in the worst 10% of all areas in the UK for connectivity with, on average, 13.2% of its areas unable to receive decent broadband speeds compared to a UK average of 2%. Many would suggest that the answer to full UK wide coverage lies in the utilisation of mobile internet, currently, 92% of the UK landmass is covered by at least 1 mobile operator with areas lacking any coverage having dropped from 21% 2017 to 8% at the last assessment. Even where reception via 4G is found it is noted that approximately half the time users struggle to maintain connection. Additionally, mobile internet is far more expensive for the data provided representing a significant barrier to adoption for many applications. Furthermore there is, as with broadband, a significant rural divide when it comes to coverage with more rural countries such as Scotland and Wales lacking 4G service coverage in 18% and 8% of their geographic area compared to only 2% in England. With the ever-increasing presence and applicability of internet connected devices, often referred to as the ‘Internet of Things’ (IoT), and services available to improve systems and productivity in agriculture this discrepancy in accessibility becomes ever more of an issue.

We are moving forward into a digitally integrated world across all sectors and areas, and agriculture, whilst possibly slower than some areas, is no exception to this. Where previously agricultural sales direct-to-consumers have occurred via farm-stores, roadside stands and farmers markets, online sales and online marketplaces have offered farmers another option to compete for customers over a large geographical range. Previous research even suggests that farms utilising these systems can achieve higher levels of sales. Issues surrounding COVID-19 highlight the potential for such systems in reducing both human and animal contact (reducing viral/disease spread). Furthermore contract farmers are expected to input data on their farming practices (growth rates, yields, feed inputs etc.) into online databases for the analysis and traceability of the contract holders as well as livestock birth and movement communications as well as many other forms of farm paperwork now being updated via online systems. This has become such a common factor that in many cases now financial penalties can occur on farms lacking internet due to analogue form processing carrying extra administration costs.

There is an increasing need for significant data speeds with certain applications such as streamed monitoring of CCTV, where high resolution file sizes or streaming could be difficult to achieve under current ‘decent’ speeds. UAV drone imagery file sizes for improved crop monitoring can also be significantly large due to their high resolution. Larger producers in the US noted that their usage of internet had grown by almost double from 2013- 2016 to up to 30 GB data a month in peak seasons. If a similar trend occurs in the future such demands will outstrip many of the current availability packages of satellite and mobile internet caps. Inherently there is a bias to download over upload speeds within current internet systems, this could in itself present issues with precision applications which are often more upload heavy in transferring collected data to online cloud-based servers for further analysis.

The immediate alternative that comes to mind to wired broadband availability is mobile internet, however, this is not without its issues of coverage as noted above. Strategies do exist which could help to improve this situation in rural areas, but these require cooperation from the service providers within the UK. One simple method to improve coverage would be to allow roaming between networks as occurs when you are abroad, this would allow any coverage to be utilised regardless of your current provider. A further ‘simple’ but costly way to improve coverage would simply be to supply strategic masts to service ‘no signal zones’ with this being an initial plan of the UK government in 2013. Unfortunately, of the 600 planned masts only 75 were built before the project closed. Extra benefits of increasing masts include a lower demand for access per mast (number of people connected) meaning speeds are faster and more stable. Finally there is an ability to utilise extra spectrum levels within 4G network systems via 700MHz or 800MHz use, this has slower speeds but increased propagation meaning it has potentially increased area of coverage and could push rural areas up to the 10 Mbps minimums.

Whilst 5G is the next attractive technology which is getting headlines at the moment its role in applications within rural areas will likely be far less impactful. In a recent study analysing 5G roll out, it was noted that rural areas will be the last to receive these benefits (towards the end of the 2030 target) and that once the target of 90% of the population is reached with initial £6 billion investments the final 10% would take an exponentially higher £12 billion, thus the 10% likely to be left out will be rural regions.

Community broadband initiatives are another route to achieving improved internet connectivity rurally. These involve a combined community approach to either demand improved broadband from local providers directly or raise money (for which certain grant funding can be incorporated) for one of the following approaches;

However, as with the global digital situation this again highlights a clear urban/rural divide where rural communities have further barriers and responsibilities that are almost non-existent in urban regions.

Satellite broadband is another potential solution particularly in deep rural areas with significant distances to the nearest infrastructure of service provision. Satellite broadband has benefits in rapid deployment and is an area Welsh Government are supporting with grants to meet up to 90% of installation costs if you currently receive less then 2Mbit/s. Whilst grants can assist with set-up, the problems with current satellite internet plans are proportionally costly plans considering the speeds and data caps associated compared to wired broadband.

Unmanned aerial vehicles (UAVs) could also have roles as wireless communication vessels in different applications. Mounting these with onboard wireless communication hub systems can act as an alternative route to collect or transmit information locally for example by flying across farmlands. However, this activity does not provide benefits on farms which lack sufficient internet access to then incorporate such data into cloud-based analysis systems. However, systems such as Facebooks internet.org project have looked at using transmissions from solar powered UAVs that can fly for months at a time to provide internet to areas which otherwise cannot receive this. Similarly Google’s project Loon looks to use helium balloons launched into the stratosphere to communicate with ground based systems to beam internet to areas which currently lack access. 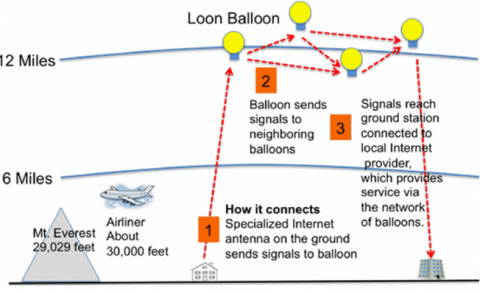 Another commonly utilised alternative to direct internet based communication in agriculture is through wireless sensor networks (WSNs). Currently the three major options for this are narrowband internet of things (NB-IoT), long range wireless area networks (LoRaWAN) and ZigBee (Bluetooth based technology) systems. These systems rely on a central tower/gateway that can send and receive data from devices within a certain range (see table below) and can be used to collect data from various precision technology systems across farms. An example of this can be seen through Farming Connects LoRaWAN project which looks to implement 18 gateways across Wales to provide connectivity to technologies on demonstration farms as well as future possibilities of open access to other farmers within the coverage areas. These can be highly beneficial for automation and data collection systems that require no further transfer of the data via the internet but do not inherently overcome internet access issues.

WiMax is a technology similar to Wi-Fi involved in providing access to the internet. Whereas Wi-Fi bridges the gap between your physical broadband/phoneline connection and the rest of your house, WiMax was designed to bridge long distances up to 80 Km and as such could have uses in bridging internet dead zones in rural communities. Speeds exceed those of ‘decent’ broadband; however, cost of towers and infrastructures can be high.

There needs to be a shift away from the perception that urban areas should be developed first before expanding outwards to rural areas which essentially are then constantly playing “catch up”. Digital need in rural areas is often high despite the relatively low population and this needs to be a consideration; it is paramount for futureproofing rural development. Schemes such as the Scottish Government’s R100 need to be employed UK wide as these aim for 100% access to more than just ‘Decent’ levels of speed. When schemes provide infrastructure set-up grants, such as in the Broadband in Wales scheme, solutions for harder to reach areas, including satellite internet, have barriers associated with disproportionately higher running costs of services provided compared to urban equivalents and this needs to be addressed, or possibly subsidised. Where mobile internet is considered there needs to be a push towards blanket coverage before increasing speeds as most users do not utilise the full extent of speeds available. Several research articles indicate productivity and sustainability benefits associated with adoption of IoT based precision agricultural technologies, and an increase in adoption of these on farms that have internet access compared to those that do not. This suggests improving rural internet coverage could assist in removing this particular barrier to more rural farms allowing them to utilise technologies more easily and efficiently.