Soil is one of the most essential aspects of any agricultural production system, with different soil components able to have huge effects on crop or pasture yield and quality, as well as increasingly important roles in environmental sustainability. Farmers have for centuries been adapting their management strategies based on observed physical and visual properties of soils, with more recent technological advances assisting in this practice. Components of the soil of major interest in agriculture include; nutrient levels (carbon - C, sulphur - S, phosphorus - P, potassium K, nitrogen – N, calcium - Ca and magnesium – Mg) which can significantly affect plant growth, physiochemical properties such as pH, texture (clay, silt and sand) and water contents. Traditional soil sampling and mapping were performed using a “W” shape field sampling pattern before grid sampling became common, this was improved through the innovation of global positioning system (GPS) technologies to allow accurate sampling localisations. The difficulty with soil sampling and mapping, however, is the huge complexity and variability present across both large and small geographic distances. To obtain information at a significantly high resolution (to be effective across individual fields) intensive soil sampling is required which is time-consuming, costly and requires repeating regularly. One technological innovation of note which can facilitate more targeted soil sampling, to provide information for more cost-efficient mapping, is electrical conductivity (EC). When utilised alongside precision application systems such as variable-rate technologies (VRTs) EC can assist in improving crop yields, pasture management, reducing input costs and assist in mitigating potential environmental impacts associated with chemical applications. 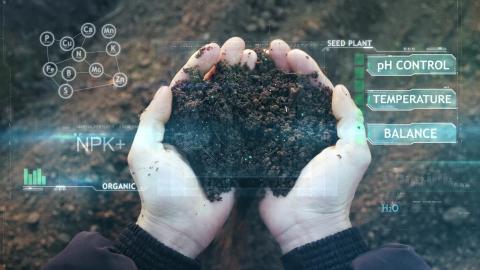 EC measures the voltage of electricity conducted through soils and is associated with several different factors of interest within soils. EC analysis was previously performed on extracted soil samples placed in solution, this required physical sampling. To improve time and efficiency EC has been adapted to ECa (apparent soil electrical conductivity) which can be performed on bulk soil samples in a mobile fashion across fields. Different soil profiles can affect soil conductivity including the makeup of sand (lower conductivity), silt (medium conductivity) and clay (high conductivity) as well as soil salinity levels. Whilst these simplistic determinants can often be made, the true nature of ECa is far more complicated. ECa, in reality, is detecting the conductivity through the pore systems of soils via water. Therefore, the size, shape, connectivity and water content of pores have the biggest impact on conductivity results. Other broad factors that have the potential to be correlated with ECa results include; mineral levels, soil moisture levels, depth to the water table and soil texture. ECa is one of the most common research assessment tools in soil systems having been used in the sugar cane industry (Florida) and the potato industry (Canada), with results suggesting correlations between ECa results and variables such as pH, magnesium and calcium nutrients levels. Results can play a role in improving soil mapping and highlighting management zones (MZs) of interest (Figure 1). MZs show a sub-division of an area which offers consistency within a defined measurement (eg. voltage or water content etc), therefore, allowing these areas to be treated with equal input quantities. 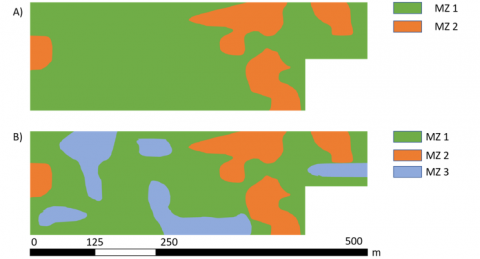 Whilst this technology is of interest, due to its ease of adaption for on the go measurements, it is subject to major variation field to field or across different sampling dates. As such, it is largely used as an initial probing tool to assign loose MZs to field areas which can be assessed further with soil core analysis. No trials were found where ECa results solely were used to make management decisions or determine specific soil conditions, these were always bolstered by soil sample core results. Following ECa analysis algorithms/software can define a smaller subset of sampling points within each MZ (eg. 6 – 20 per MZ rather than up to hundreds across the field via traditional sampling), with results of sampling informing management strategies to apply to each MZ. Several companies offer services which almost always include ECa measurements of farmland, as these provide accurate mapping when combined with GPS, with ECa detection technology being easily mountable on vehicles for rapid field coverage.

Farming Connect demonstration farm, Pantyderi, is utilising precision mapping tools to improve their management strategies in nutrient applications (lime and fertiliser), as well as seed applications, in both crop and grassland systems. The project aims to provide Welsh farmers with information on changes in nutrient inputs as well as yield, quality and uniformity of crops and silage produced, whilst, importantly, considering the farm costs of implementing such systems.

Whilst ECa mapping offers a rapid and more targeted method to develop MZs within a field, or across entire farms, to use this information efficiently it should be integrated practically into management strategies. It has long been understood that soils are not homogenous, with fluctuation in crop yield, soil quality and nutrient profiles observed across spatial sampling. Papers outlining the general principles to assess and manage variations in soils date back as far as 1929, however, the ability to accurately and easily act upon these assessments is relatively recent. To date, “traditional” farm management treats fields as homogenous areas, as this is attractive to farmers, offering quick and simple implementation of uniform inputs. Homogenous field inputs are increasingly an issue due to a move towards environmentally sustainable farming, where chemical input minimisation is desired. Variable-rate technologies, facilitated by advancements in GPS and geographic information systems (GIS), allow for highly accurate localisation of defined soil/field conditions to be acted on autonomously. Systems include those for providing variable application of fertiliser, lime, manure, pesticides, insecticides, water and variable seeding. VRT functions by utilising information from GIS maps and variable input machinery to change input values automatically when GPS linked systems trigger a response. In practice, this involves taking data of mapped input values linked to GPS coordinates on a data device (such as USB stick) and providing this to a VRT integrated system, this then controls application rates accurately. Previous evaluations of VRT for fertiliser, for example, have shown >60% reductions in fertiliser applied leading to >7% cost reductions, and minimal yield changes compared to non-VRT systems. Similarly, in the case of winter wheat, trials demonstrated a minimum 6% positive yield increase using VRT to apply nitrogen compared to non-VRT management. Furthermore, VRT nitrogen applications demonstrate a role in combating N leaching in nitrate vulnerable zones (NVZs) whilst also achieving higher profits and have shown on average savings of 25%. VRTs appear to be a suitable technology towards alleviating modern farming concerns, however, adoption rates globally and within the UK do not reflect this. In recent analysis, into the adoption and non-adoption of variable-rate technologies, it was determined that the four highest drivers for non-adoption were; the high cost of technology - 23%, a farm being considered too small for technology to be viable – 22%, a lack of information on the technology – 19% and a perceived low return of investment – 11%. Whilst a reason farmers suggested would help them adopt technologies was a reduction in their costs, either via price of technologies decreasing over time or through government subsidies.

Though, in this instance, VRTs are discussed concerning ECa mapping, it is important to note that these technologies function with an array of other soil mapping techniques or even a combination of these via multi-layer soil maps.

Other technologies and prospects

EC is a form of proximal soil sensing (PSS) of which many other techniques exist, these have different accuracies and measure different soil components. PSS technologies differ from remote sensing (see below) and laboratory-based soil analysis, in that they are field-based and involve close contact with the soil (within 2m), as such, they can be considered invasive (direct sensor contact to soil) or non-invasive (no physical contact). Most importantly where the application of PSS is concerned in precision applications, certain technologies work only whilst static and others are suitable for mobile use, with mobile application facilitating lower time, higher resolution results for on farm mapping. A table of other technologies, their ability to be utilised in a mobile manner (as is more commonly desired), along with an indication of the soil properties they analyse can be seen below. Different PSS systems have different strengths and, as such, the ideal future for these technologies may be in multi-sensor systems which could provide multiple layers of soil information simultaneously, though these are yet to become common.

Remote sensing (RS) offers another approach to mapping areas and determining soil properties and has benefits in low costs with rapid applications. RS uses electromagnetic energy to work out properties of a scanned target from a distance, usually via satellites, aircraft or more recently drones. Whilst RS has been suggested to have the ability to determine multiple key soil components, including but not limited to; carbon,  phosphorus, potassium, nitrogen, calcium, magnesium, pH, EC and clay/silt/sand percentage, it is equally noted, that due to absorption spectra overlaps of many soil chemicals, that accurate analysis is highly complex. Between geographical regions, RS soil property models are hugely affected, therefore, accurate calibration would require massive global soil sampling with immense time and economic costs involved.

The future for soil mapping globally appears to be in the development of digital soil mapping (DSM). DSM uses collected observations and data on various local soil populations, across time, and integrates these with numerical models, to infer soil conditions and properties across larger global regions. DSM has moved the field of soil mapping from smaller to larger areas, from simple to more complex landscapes (able to evaluate multiple factors simultaneously), has moved away from 2D spatial modelling to 3D (where soil demonstrates heterogeneity both vertically and horizontally) and has shifted from purely agricultural to be ecosystems service focused. DSM aims to assist with food security, climate change, land degradation, biodiversity loss, water resource management and ecosystem health, with several working groups now set-up to facilitate global development. Groups include GlobalSoilMap.net and the working group on digital soil mapping as part of the International Union of Soil Science (IUSS), with general aims to deliver a worldwide scale soil map at practically high resolutions for use. A significant challenge of such projects is, as is demonstrated above, the huge variety of soil mapping technologies utilised to date, each of which produces “legacy” data in different formats which need to be converted before being usefully combined.

Soil management plays a vital role in maintaining efficient, high quality, low environmentally impacting agricultural plant growth, whether these are crop or pasture systems. Farmers tend to have a good understanding of their farm soil status, however, this often only extends to effects which can be observed easily. New technologies are consistently being developed to assist in the evaluation of soil properties, with increasing accuracy and ease of use. Whilst soil analysis is an area of high complexity, certain systems have the potential to produce soil maps with sufficient information and detail that they can assist in reducing the cost of specific sampling, and actively be incorporated into practical farm/field level management changes. Electrical conductivity is one commonly used system which has demonstrated roles in increasing crop yield following integration with variable-rate application technologies.