The subject of gene editing or GE has hit the headlines again, as DEFRA initiated a consultation regarding the legislation covering the term GMO (Genetically Modified Organism) and regulation of genetic technologies in English agriculture. There is a suggestion of altering the phrase GMO to gene-edited organism (GEO) and revisiting legalising its use in England. The new definition of a GEO could encompass animals and plants that have been selectively bred using traditional breeding methods. Currently, legislation requires that all GE organisms are classified as GMOs irrespective of whether they could be produced by traditional breeding methods, this legislation is an EU law so leaving the EU has opened the opportunity for revision. All living organisms possess a genome, which is made up of a certain number of chromosomes which in turn are comprised of millions of genes that are all formed from DNA (or in some microbes, by RNA). DNA is made up of four individual nucleotides (Adenosine (A), Thymine (T), Cytosine (C) and Guanine (G)).

Gene editing: The highly targeted insertion, deletion or replacement of DNA in the genome of a living organism, usually only targeting a very small amount of DNA.

Genetic modification (GM): The random insertion or deletion of genes and larger segments of DNA in a living organism.

GMO: (Genetically Modified organism) The recipient organism which has been subject to some form of genetic engineering (be that editing or modification).

Genotype: An organism’s DNA or genome.

The definition of GE and GM can depend on the country and the individual and there is some debate about whether they are the same thing, or not. The consultation aims to address issues such as this - to agree on a consistent definition and to discuss appropriate regulation. 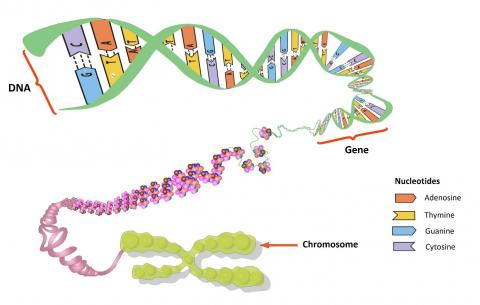 Coding genes tell the organism how, where and when to make a specific type of protein – like an extremely tiny instruction manual. Alongside these genes that encode useful proteins are non-coding segments or “junk DNA” which often play a role elsewhere in the system. There is a wide range of changes that may be made to DNA using GE methods, from a single nucleotide change to the insertion of a whole new gene. In some cases, a single nucleotide change is enough to produce an observable effect whilst other times a larger insertion or deletion may be needed. So, whilst a change may be made to the genotype of the organism this may or may not be reflected in the phenotype (the outward expression of a trait, such as milk yield). As well as producing a change in phenotype, GE tools can be used to investigate the function of a gene.

How is it done?

Many methods can be used in GE and selection depends on the target organism and the characteristics of the DNA in question (e.g. size and structure). Gene editing relies on the use of site-specific nucleases – enzymes that cut DNA. There are three different types of nuclease in use, though perhaps the best known is CRISPR (clustered regularly interspaced palindromic repeats) which rose to notoriety in 2018 when it was used in human embryos. These enzymes are highly site-specific and break both strands of DNA which allows for insertion or removal of small to medium size pieces of DNA. Amongst industry experts and academics, CRISPR is an exciting prospect as the tool is efficient, easy to use, relatively low cost and offers the option of making multiple edits in a single procedure. However, the tool only cuts the DNA, leaving repair down to natural mechanisms which can be variable and produce different outcomes depending on the individual which can impact overall efficacy. A very recent development in the CRISPR method allows genes to be switched on and off without having to actually edit the DNA. CRISPRoff is a fully reversible tool for controlling gene expression that is specific, precise and also heritable. The method behind this technology is relatively simple, as a chemical tag is added to the DNA making it inaccessible for reading and subsequent protein production. But this tool does present a conundrum – if we’re not actually changing the DNA of an organism, is it still classified as a GMO or a GEO? Whilst genetic manipulation has certainly occurred, the DNA has not been modified which would make identification of organisms produced using CRISPRoff very difficult.

Why would we want to do it?

There are a multitude of reasons why we should and shouldn’t adopt GE in agriculture and whilst opinions should be developed based on facts, personal beliefs also play a key role in formulating your outlook. This part of the article aims to present some of the reasons for and against GE, some past examples of its use and its potential role in agriculture but will leave the formation of an opinion to the reader.

Arguments in favour of GE tend to centre around the potential phenotypic outcomes we may be able to induce, for example, disease and pest resistance, increased yields or reduced detrimental by-products. Indeed, you need not look far to find existing examples. Perhaps the best-known instance is the development of plant-incorporated pesticides which gave rise to pest-resistant varieties of corn, cotton, potato and soybeans, amongst others. These GMOs contain a gene from a naturally occurring soil bacterium (Bacillus thuringiensis) which is active against certain pest insects. Numerous studies have been conducted assessing the safety of these crops, finding no risks to human health (the protein cannot act as an allergen or toxin), safety to predatory and beneficial insects and no threat to the surrounding environment and native species.

More recently, tomatoes have been the focus of brand-new GE technologies. Amongst the most widely cultivated and consumed crops in the world, tomatoes contain relatively high levels of γ-aminobutyric acid (GABA) a beneficial amino acid known to lower blood pressure in humans. In green-stage tomatoes, GABA can account for up to 50% of amino acids, but this declines to 20% as the fruit ripens and reddens. Japanese scientists have successfully used GE techniques (CRISPR) to enrich for GABA by deleting the DNA region coding for two out of 5 regulatory enzymes. Simply put, the controlling mechanisms of GABA synthesis were reduced, but not entirely eliminated, leading to a 7 to 15-fold increase in GABA content. Produced by Sanatech Seed, the “Sicilian Rouge high GABA” variety of tomato has been released to the Japanese market as a GEO, rather than a GMO. Using the same GE tool, scientists have also produced a line of pigs resistant to Porcine Reproductive and Respiratory Syndrome Virus (PRRSV), one of the most economically important infectious diseases of pigs across the globe. PRRSV leads to pregnancy loss in sows and severe respiratory and gastrointestinal disease in piglets, with 80% of pre-weaned piglets dying as a result. Using CRISPR, the DNA coding for the receptor allowing the virus entry to the pig’s cells was deleted and resulted in pigs that are fully resistant to infection. When challenged with infection, no clinical signs, lung damage or antibody response was observed for the 35 day observation period and all GE pigs remained healthy. Further studies using this line of pigs found no effects on animal growth rates and demonstrated resistance to two different strains of PRRSV. The GE also did not negatively affect the immune response overall, leaving the system fully functional.

Previous studies have found a genetic basis for enteric methane emissions in cattle, whilst this trait is not entirely under genetic control, DNA does play a role. That said, a gene must be identified before it can be edited and many traits (including methane production) are likely under the control of several different genes (making them polygenic) as well as interacting with other environmental factors such as the rumen microbiome and host diet. This makes the job more complex and highlights the extensive work required to identify and characterise genes even before considering manipulation.

With reference to GMOs, many proponents suggest that the safety of an organism is dependent on its characteristics and use, rather than how it was produced. To some, the DEFRA consultation will be a welcome chance to update the now 30-year-old EU regulations that do not consider the most up to date technologies available. Concerns have been raised with regards to narrowing genetic diversity as a result of GE, as harmful or mutated genes are removed from the pool. However, this once again relies entirely on its use and regulation as it is also possible to increase genetic diversity by incorporating wild type DNA. The great advantage of GE is the rapid speed at which results can be produced when compared to natural or selective breeding, as well as the precision of the method.

Perhaps the key concern with the introduction of GE is transparency – with regards to communication, labelling of food, GE methods and consistency between nations. Many express worries over tracking GEOs through the food chain, concerned that identification will not be possible resulting in mislabelling and misrepresentation. As not all edits result in obvious phenotypic changes, it can be difficult, sometimes impossible, to visually identify a GEO amongst non-GE produce – this issue may be compounded with the introduction of CRISPRoff. Consumers have a right to an informed choice on GE foods, so to uphold trust and transparency it is essential that robust and reliable labelling and tracking systems are developed alongside any GE foods. It is also important that systems and policies are consistent between countries, whilst the EU currently holds very strict rules surrounding GMOs, American and Argentinian laws are more lenient. Such a tracing system should also address the possibility of “escape” of GE organisms to the surrounding environment carrying with it the possibility of out-competing native, wild types.

As previously mentioned, polygenic traits could also be a stumbling block for this technology. The majority of genes do not function independently from each other and instead are dynamic and operate in an interactive system. Whilst this certainly adds another level of complexity, it also means that more detailed and comprehensive work will be needed before a polygenic trait can be edited. The same may be said of traits that are jointly influenced through genetics and environmental factors, likely, GE would only be able to partially change these traits.

As with any new technology, it is important to maintain perspective and not to view GE as a “silver bullet”, attention must still be paid to farmer-driven action and support for eco-friendly, sustainable farming strategies. Though there is the potential for GE to be used in support of developments in sustainability and in particular global food security the widespread use of this technology is likely a long way off. Plans to open consultation about the categorisation of GE organisms and GMOs aims to promote discussion and make steps towards an agreed definition in England which should then allow reliable and consistent categorisation and labelling. The growth and sale of GMOs is permitted in England and Wales, subject to an intensive authorisation process and it is unlikely that the present consultation will change this. But perhaps now it is time to consider whether there is a market for GE food in Wales. Consumers are entitled to a choice, a choice whether to consume GMOs, GE food, both or neither at all. But if there is the opportunity to offer consumers a more sustainable, efficient or cheaper product then perhaps some producers will take it.