The importance of biodiversity and wildlife on farmland

As the global human population continues to rise, more land will need to be committed to agricultural production to meet a likely rise in demand for food. This has the potential to increase the conversion of land which has not been previously used for agriculture, or to intensify agricultural activities on land already used for food production. Farmland habitat, referred to as the agroecosystem, is perhaps the most important environment in the UK in terms of wildlife and biodiversity, as this is the primary land use type covering nearly 75% of the country. In recent times this environment has been associated with biodiversity loss and with reductions in presence of wildlife as a consequence of post-war agricultural intensification.

Biodiversity (see box 1) is essential for ecosystem productivity and function. It plays a key role in ecosystem stability, which is a measure of a system’s resilience to environmental change, such as is expected from future shifts in climate. For that reason, a balance must be found on-farms which allows for the needs of wildlife without impacting on the potential for food production. However, does this mean we can only have one or the other, or is it possible to increase the opportunities for farmland wildlife whilst also maintaining the potential for agricultural production?

What drives biodiversity at the farm scale?

Land use and management intensity are key factors influencing biodiversity in the agro-ecosystem, as this reduces food and habitat availability for wildlife. As an example, management approaches such as fertiliser usage, grazing intensity and mowing frequency in grassland systems, have been shown to result in biodiversity loss through a process called biotic homogenisation. This is where landscapes become increasingly simplified and uniform as a result of modification by the management or land use, resulting in the loss of species both above and below ground, due to reductions in habitat variety.

The addition of nutrients, particularly nitrogen and phosphorus, for crop management is a key feature of modern intensive agriculture. This enrichment can affect the species richness of plant communities by 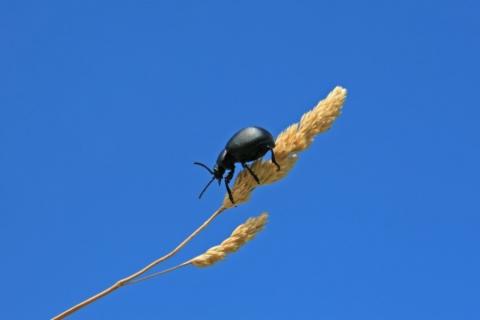 increasing the competitive potential of a few productive species, resulting in fewer species overall. In addition, this can also influence various soil processes, including rates of soil organic matter loss, as nutrient availability also governs microbial activity rates. Low nutrient input farming approaches, such as organic farming methods, can reduce biodiversity loss and these farms are typically richer in wildlife than conventionally managed farms. However, recent research has demonstrated that regardless of management approach (i.e. organic vs non-organic), the critical factor governing on-farm biodiversity is the presence and abundance of semi-natural habitat.

At present, there are two principal approaches to wider management which have been suggested: wildlife-friendly farming (where agricultural practice is tailored to enhance populations of wildlife by creating a more integrated system) and land sparing (where portions of agricultural land are managed intensively to increase yield, allowing other land to return to a semi-natural state, which can then act as reservoirs of biodiversity).

Both approaches have the potential to benefit biodiversity and are not necessarily mutually exclusive, as the goal in both cases is to increase the availability of resources for wildlife such as food and shelter. Specific factors governing different landscapes, such as topography, may inform which system is most appropriate or feasible in a given situation, but overall this can best be achieved where the amount of land set-aside for wildlife is increased.

Excluding portions of land from production around the margins of fields will promote wildlife by increasing food and habitat opportunities and by limiting exposure to fertiliser and pesticide applications. The amount of land which can be spared will depend on field and farm size, but even a one metre strip between hedge and crop has been shown to benefit wildlife. Alternatively, a strip of habitat can be created across the middle of a field, which will provide habitat for small mammals and invertebrates (usually a double ploughed ridge sown with native tussock grasses). These are often referred to as ‘beetle banks’ and should be approximately 2-3 metres wide for best effect. Tree and hedgerow planting, to create woody vegetation patches, will also benefit wildlife and can have additional beneficial effects from stock management and ecosystem service perspectives.

In terms of nutrient usage, the needs of wildlife and biodiversity do not need to come at the expense of production. Instead, careful nutrient management planning and increased application precision should be employed to ensure only the necessary and correct amount of fertiliser is used for crop production, which will act to save farmers money, increase business efficiency, and reduce the impact to sensitive species and the wider environment. Furthermore, strategies such as vegetation buffer strips, both in-field and alongside watercourses, may aid farmers in reducing the effects of diffuse pollution, limiting the impact to stream life, contributing to flood mitigation strategies and potentially improving the quality of drinking water. This in turn serves to increase habitat opportunities and the diversity of habitats across landscapes, and consequently the opportunities available for wildlife. 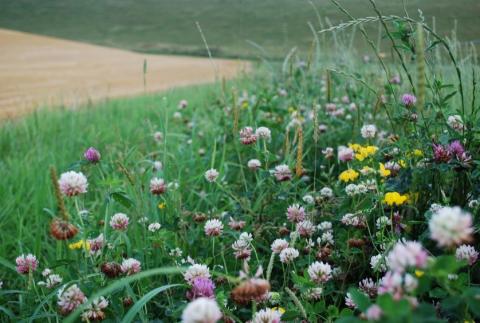 Agri-environment schemes in the UK have actively promoted the introduction of farm management approaches which benefit our native flora and fauna. Wildlife-friendly farming strategies can support wildlife that is considered beneficial in an agricultural context, such as those which engage in pollination or as natural enemies of crop pests. This in turn may have positive influences on agricultural production.

One recent field based study compared different amounts of land removed from production for the purpose of wildlife habitat creation. Measured yield was demonstrated to increase for the studied crops of wheat, beans and oil seed rape, in fields with up to 8% of land set aside. When compared with control fields (with no wildlife habitat patches), the overall yield was comparable, which indicated that the benefits derived from the wildlife friendly approaches, in terms of increased yield, compensated for any loss incurred from taking portions of land out of production.

This effect is due to improvements in the delivery of natural services provided by wildlife and from the fact that the land sacrificed could be considered less productive or lower yielding (for instance, at field edges where there is increased compaction, competition from trees and hedgerows for light and water, and greater stress from pest species). It is also expected that time will be needed for populations of some wildlife species to recover from current low levels. Thus, whilst some benefits may be observable in the short term, it could be expected that as populations will continue to improve, then beneficial influences on yield and ecosystem service delivery, will continue to strengthen.

Other studies have demonstrated increased yield in grassland as a result of increasing plant diversity by sowing species rich seed mixtures. In an experiment considering gradients of plant species richness and management intensity, higher diversity was shown to be more effective in increasing productivity than higher management intensity and low-input high-diversity fields had similar productivity to high-input low-diversity management regimes. Whilst overall costs associated with restoration would need further consideration, and some thought should also be given to field and soil preparation as soil nutrient status is likely to dictate the success of sowing species rich mixtures, this demonstrates the potential for increasing habitat availability whilst reducing environmental impact and cost of production to the farmer, by reducing fertiliser input requirements.

Any benefits associated with the enhancement of wildlife will need to be weighed against the cost of such approaches in the context of farm management. These could include land lost from production, or the cost of any upkeep or maintenance of set-aside or wild areas. However, evidence to date suggests that providing habitat and food for wildlife on farms, may have positive effects on potential production yield, as well as improving the potential for ecosystem service delivery.

In the long term, such actions may become even more important due to current rates of environmental change, which are likely to add additional pressure to this already pressurised ecosystem. By changing approaches to farming to conserve biodiversity by providing for wildlife, it may be possible to enhance the potential for resilience in the agroecosystem, helping to future-proof it against expected shifts in climate.