On-farm manure management has received growing scrutiny in recent years due to the potential for pollution associated with bad management practices. Slurry management can pose numerous challenges to farmers, as the infrastructure required to contain or house this material can be costly, and the size of the slurry burden can be difficult to predict. 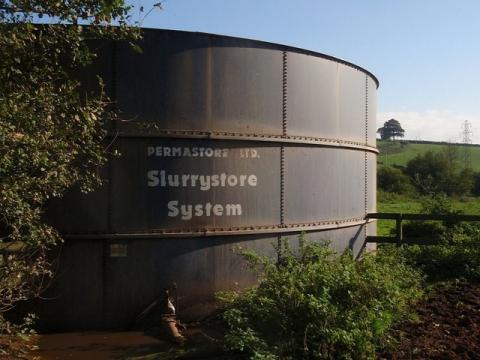 Slurry is simultaneously both a waste and a resource product. The nutrients within slurry are a necessary component of farm practice, and are essential for grass and crop production. However, slurry should only be applied at certain times of the year, when the conditions for application are suitable, and when plants are in a  growth phase and able to utilise the additional nutrients. Outside of these times, or where a surplus of nutrients is reached, it will be necessary to store the slurry waste until such time as it can be applied.

Implementing management practices that reduce the potential for the production of slurry material is best practice for reducing the burden of storage and application. On-farm infrastructure should avoid mixing rainwater into the slurry resource, as this will increase the liquid fraction of the slurry mix and increase the space required for storage. The amount of slurry produced can be directly linked to the amount of rainwater that is allowed to mix with livestock manures. Once freshwater is exposed to animal manures, it must be managed in the same way as the slurry itself to ensure nutrient pollution is avoided. Therefore, improving on-farm infrastructure to avoid this effect (i.e. by putting roofs over cattle yards, or improving guttering and drainage) is an essential strategy to minimise the requirement for slurry storage.

Utilising separation technology offers several benefits including reduced requirement for slurry storage space, reduced odour output from the manure material, easier handling and transport of the resultant separated fractions, and reduced potential for localised environmental pollution. Slurry can be separated into solid and liquid fractions through the removal of solid organic or inorganic material from the liquid manure. The resultant solid fraction is primarily composed of dry matter rich material, which contains the majority of the organic matter, including a significant proportion of the phosphorus. The liquid fraction is primarily water and other soluble materials, including nutrient components such as mineral nitrogen and potassium. The constituents of each material will depend heavily on the technology used during the separation process. 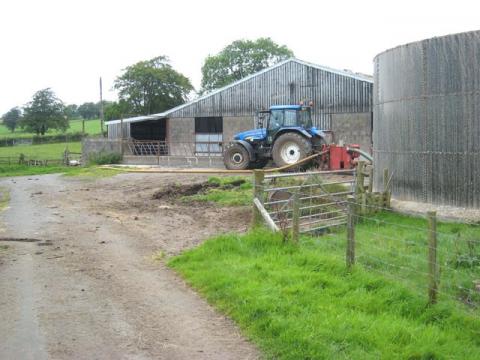 Separation of slurry into solid and liquid fractions may also serve to concentrate the nutrient content (primarily in the solid fraction). This may make this material more suitable for transport to areas where there are nutrient deficits, such as arable dominated regions in the east of the UK, and may increase the commercial potential by making this material better able to compete with chemical fertiliser as a product.

Mechanical separation typically involves the use of apparatus such as a press, screen or centrifuge. It has been suggested that mechanical separators are the best option because of their efficiency in producing a solid fraction with a high total solids content, on a relatively cost effective basis. For example, one study showed that a screw press can recover as much as 73% total solids when separating solid and liquid fractions.

Screen separation encompasses numerous different systems, such as stationary inclined screens, vibrating screens, rotating screens, or in-channel flighted conveyor screens. All such systems rely on feeding the slurry material through a screen of specified pore size, which only allows particles of a certain size to pass. The different systems all have certain design characteristics which may be favourable depending on the slurry material type, or operational budget, such as the use of gravity, pressure, or mechanical vibration to drive the material through the screen. Centrifugation relies on centrifugal force to increase the speed with which suspended particles are separated out of solution through settling. This can be undertaken with either a centrifuge or a hydrocyclone, but this is suggested to be only effective when the solid content is greater than 5-8%. Press separation can be undertaken by roller press, belt press, screw press, or filter press. Each of these systems involves continuously fed dewatering devices, which apply mechanical pressure to the slurry material, allowing the liquid fraction to pass through a filter or screen, whilst the solid fraction is retained. This approach can achieve a high level of dewatering and can produce a pressed solid fraction material. Filter press systems use pressure to force the material through a filter, the size of which can be specified depending on what proportion and size of material is aimed for removal.

In addition to mechanical separation systems, microfiltration or electrolysis approaches are also developing which can be highly effective as separation systems, with potentially greater control over the composition of the end products. Microfiltration is a system which uses fine membrane filtration to remove all but the smallest molecules. This means that nutrients such as phosphorus and nitrate can be captured and retained and the liquid fraction produced can be near to pure water. This obviously requires the application of advanced technology and machinery, thus advice on system design should be sought.

One alternative technology for slurry separation currently under investigation in a project at Coleg Sir Gar uses a process known as sonoelectrochemistry. This combines power ultrasound and electrolysis for 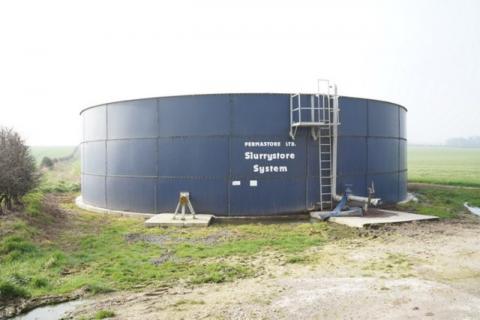 water treatment. This process relies on the creation of electrons and cavitation (bubbles) within the liquid material to aid the efficient removal of inorganic, organic and nutrient compounds. The action of creating cavitation generates heat and pressure in the near area of the cavity as the bubble ultimately collapses, which is sufficient to start and sustain a reaction in the slurry material. This system will also utilise two approaches to separate the material: charge neutralisation through electrochemical dosing (which converts soluble contaminants to insoluble form, making them easier to separate out) and an advanced oxidation process (which mineralises organic compounds resistant to breakdown and reduces the ammonia content). This approach is believed to have the potential to reduce slurry volumes by up to 80%, and produce water sufficiently clean enough for reuse or safe discharge. In addition, by aggregating the nutrient components into the solid fraction, this approach could maximise the potential for nutrient recycling, establishing a more efficient on-farm nutrient cycle by preserving rather than wasting nutrient resources, which will reduce environmental impact and increase farm business efficiency.

For all these approaches there is a potential cost implication, which increases depending on the amount of energy or manpower required for use. This can vary considerably, but typically the more technological the approach, the greater the cost to procure and the more energy needed to operate. The management also required to operate such machinery may mean increased labour for day-to-day function and maintenance requirement.

Separation technologies offer great potential to reduce the burden on farm infrastructure of managing farm slurry output and resource. By separating this material into solid and liquid fractions the requirement for organic waste storage can be reduced, the resultant material can be easier to handle and transport, and the potential for environmental pollution is reduced. In addition, the nutrient rich solid material may offer a fertiliser product that is comparable to chemical fertilisers.