Miscanthus as an alternative crop for Welsh farmers 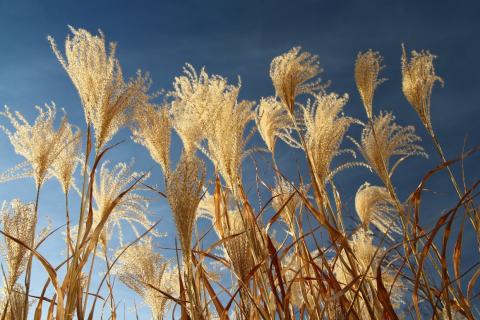 What benefits can miscanthus bring me?
Miscanthus is a hardy perennial grass crop originating from South East Asia, grown horticulturally and en masse for bioenergy production.

Crops cultivated for bioenergy must be high energy, with large, fast-growing biomass. Miscanthus species are perennial grasses with potential for very high rates of growth, and some species, such as the sterile hybrid ‘M. x giganteus’, can reach up to 4m each year, with aboveground dry matter biomass yields up to 15-25 tonnes per ha across Europe. This offers a higher biomass yield than other bioenergy crops, such as Short Rotation Coppice (SRC) e.g. willow or poplar, and cereal straw, including barley, wheat, oats and rape.

Miscanthus is ideal for marginal land use, where soil quality may be lower or land steep. It can flourish on virtually any soil types, and thus offers the opportunity to utilise unprofitable fields. Currently miscanthus has few known pests or diseases, leading to a highly resilient crop in the field, with little requirement for pesticide or fungicide treatments. With minimal input required post planting, miscanthus is an ideal crop for the busy farmer.

Due to the clonal nature of most commercial miscanthus species through asexual rhizome propagation, the crop is fairly uniform, leading to improved harvests and crop maintenance. The grass is an ideal crop for buffer zones, promoting soil microbial activities and efficiently removing nitrate nitrogen and nitrate from groundwater and soil through the rhizosphere surrounding the rhizome and fine roots.
The habitat provided by the miscanthus crop can provide shelter for small mammals, and birds throughout the season. As a crop that doesn’t generally get harvested until post-senescence, the crop can provide shelter over the usual harvesting periods and through winter. The Welsh Government aim to improve biodiversity through the Public Goods Scheme, and suggest creating new habitats across the country is a priority; planting more crops with varying harvest times is likely to help improve habitats for small fauna year round.

A low mineral content is desirable for biomass intended for thermal conversion, and therefore minerals are re-mobilised into rhizomes over the winter, enabling nutrient sequestration for the following growing season. Furthermore, a late harvest should lead to reduced contractor rates, as prices are likely to be lower outside of the typical harvesting season. Miscanthus can also be planted late in the year, with an ideal planting window until the end of May, again avoiding unnecessary conflict with planting times of other crops.

Currently miscanthus is predominantly used for co-firing in coal furnaces, as a high energy and highly lignocellulosic species, for which the crop may be baled similarly to straw, or processed into pellets. There are also many alternative markets, including but not limited to, domestic fuel alternatives, biocomposites and animal bedding. Welsh water park, Blue Lagoon, is also heated through miscanthus and woodchip biomass from a local energy centre.
Miscanthus may also be converted into ethanol through a variety of pre-treatment options, such as chemical (e.g. NaOH), physical (e.g. hammer milling) or biological (e.g. enzymatic hydrolysis), before fermentation with Saccharomyces cerevisiae (yeast).
For animal bedding, the grass is finely chopped and spread under wheat straw, and offers benefits including improved absorbency, grip, and on a minor scale, darkling beetle numbers were reduced in miscanthus replicates compared to wheat straw replicates. Darkling beetles are an occasional pest in straw and hay bales, and although mostly harmless, may cause gastric issues if ingested in significant numbers, and can be potential vectors for disease. Producing animal bedding in-house also offers the farmer an opportunity to reduce the need to import excess products.

The importance of miscanthus as a bioenergy crop 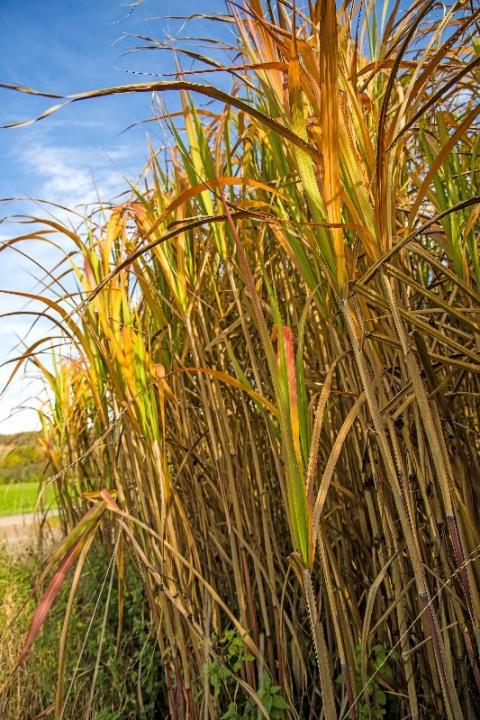 Globally, energy demands are increasing. As strain is being placed on limited energy supplies, pressure is being pushed on politicians and consumers to consider more sustainable alternatives. As yet, no clear single source has been identified that could wholly replace current carbon energy sources, however novel technologies are being designed across physics, chemical and bioenergy sectors to reduce pressure on current limited fuel supplies.

Bioenergy crops offer a carbon neutral solution to this ever-growing problem, where the carbon sequestered by the plant during its lifespan may be utilised as an alternative carbon fuel after harvest. Bioenergy crops are being utilised around the globe for biofuel, such as bioethanol and biodiesel, bio-products, including bio-plastics and biopolymers, and as an alternative for coal in coal burning factories.

The EU Renewable Energy Directive includes a statutory target that 10% of transport fuel should be sourced from renewable sources, such as electricity, hydrogen or biofuels. Fuels of 10% renewable sources (E10 fuels) are used across mainland Europe, particularly Germany, France and Finland, although as yet are not widely available across the UK.
In 2017, European industry ePURE estimated that the UK had the third largest renewable ethanol production capacity in Europe, with an installed production capacity of 985 million litres. Defra estimated 132,000 hectares of agricultural land (>2% of all arable land) were cultivated with bioenergy crops (53% of this for the UK road transport market). This suggests that the UK should have little issue with engaging with directives to increase biofuel production and consumption on a national level. By cultivating higher yielding crop species, biomass production is likely to increase while not having significant increases in land use.

The UK’s Renewable Transport Fuel Obligation (RTFO) guidance for fuel suppliers requires suppliers to produce fuel blended with renewable ethanol biofuel sources. Petrol in the UK is currently blended with 4.75% renewable fuel, (0.5% of transport fuel from sustainably produced bioethanol), with biofuel percentage targets of 9.75% by 2020. Such figures suggest that the demand for bioenergy crops is likely to increase over the next decade, potentially leading to greater incentives developed and improved profit margins.

The price of imported wood chip is likely to rise as a result of leaving the EU in 2019. With the export tariff for goods from the EU between 2-4%, in addition to rising biofuel costs, and the expected increase in complexity of supply chains outside the single market, the costs of importing goods including bio-products are predicted to rise further. The UK is currently expected to retain ambitious environmental targets set by the EU regarding 2020 and 2030 renewable energy targets, which will require a solution. By cultivating more of our own renewable crops on unused arable land, the UK may still be able to meet targets in a cost-effective manner. It is hoped that the UK government will offer greater incentives for planting renewable crops over the next few years.
Whereas the UK has limited land available for long-term forestry crops compared to much of Europe, fast-growing bioenergy crops such as miscanthus offer an alternative biofuel source that may be able to help alleviate reliance on imported fuel.

In the long-term, the UK government have claimed to support UK businesses in development of new markets in the “bio-economy” and wish to play “a leading role in providing the technologies, innovations, goods and services of this future”. £162m is to be invested in innovation for low carbon industry and the bio-economy and there are plans to replace the Common Agricultural Policy with increased incentives for investment in sustainable agriculture. The government has also announced a ‘25 Year Environment Plan’ from 2018, which has been largely welcomed by Farming Unions and will provide incentives to farmers to deliver a range of public goods. This includes new approaches to incentivise more landowners and farmers to plant trees for agroforestry and bio-energy, and hopefully will extend to other high-throughput bioenergy crops in the future.

The Welsh Government have announced a Public Goods Scheme, following policy changes after Brexit, to provide a “new, meaningful income stream for farmers able to supply those environmental services not supported by the market”, and suggest for some producers, public goods payments will provide a large proportion of their future income. This has garnered interest from many bioenergy technologies, including Confor, a promotor for sustainable forestry and woodland practice. A press release on the 4th June 2019, following responses from several interested sectors, proposed annual payments to farmers in return for environmental outcomes, including hitting carbon targets. The Welsh Government further convey an involvement in the development of renewable energy from biomass during the transition to a low carbon economy, with plans to ensure Wales’ communities have access to advice, expertise and funding to harness proven renewable technologies.

As a long-lived plant, sustainable over 15-20 years of annual harvests, miscanthus may bring in an annual profit without yearly establishment costs. Initial costs of miscanthus establishment has decreased over recent years, and is estimated at £1500-£1700 a hectare in the UK, depending on desired density, with costs expected to decrease further as technologies and cultivars are developed. Harvesting costs are relatively cheap at an estimated £170 per ha, assuming 14 t/ha harvests (this price will be further reduced if the equipment is already on site). If a conservative lifetime estimate of 15 years is used, the estimated cost per year, to include establishment costs divided across the expected lifetime and yearly harvesting is only £280. Revenues are estimated using current costs of harvested miscanthus for fuel at £31-£40/tonne, leading to an estimated income of £183-£211 per hectare, minus haulage costs.
Overall, including establishment and crop care a net margin of £900 per ha may be expected. The first full yield may be as late as the third harvest, and profits achieved over the first few harvests are likely to improve further. 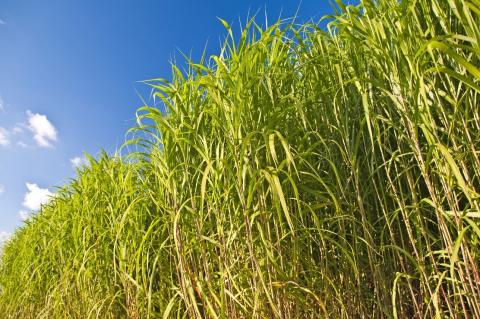 Overall, miscanthus appears to offer a sustainable form of renewable energy for multiple industries, which are only likely to increase in demand over the coming decades. With a substantial lifetime, over 15 years, the crop is likely to become a key player in the renewable energy market and it should be expected that as the market demand increases, the potential value of the crop, particularly for early starters, should increase proportionally.

With the government planning to hit ambitious renewable energy targets over the next couple of decades, the demand for sustainable bioenergy sources that conflict little with food production will skyrocket. As a crop that will thrive on underused, marginal land with poor quality soils, miscanthus is one solution to an almost impossible problem.