Multi-species grassland: Is it time to consider your roots?

Intensive grassland systems require active management to maintain productive, monocultural leys, including large inputs of fertiliser and periodic disturbance in the form of ploughing and reseeding. This can have large costs, both in financial and environmental terms. There is a growing body of evidence that increasing the amount and diversity of plant species within grasslands can reduce necessary management, have a positive influence on production, and limit the impact of agriculture on the environment.

Multi-species swards (also referred to as species-rich or diverse grasslands) are grassland communities comprising grass, legume and herb species. This increased diversity means a wide variety of plant forms are represented, which can increase biomass production and produce a forage material comprised of a variety of components, including some with medicinal qualities.

In the modern agricultural era, intensification and industrialisation of farming practice has resulted in the removal and conversion of species-rich, permanent pasture into swards comprised of only one or two species. Species-rich grasslands were once common across the UK and supported pastoral agriculture, healthy functioning soil, and abundant and diverse flora and fauna. As a consequence of post war conversion, species-rich pasture has been reduced to just two percent of grasslands in the UK. This shift has had a major influence on the agro-ecosystem, and is undoubtedly a factor contributing to the decline in farmland biodiversity observed in recent decades. 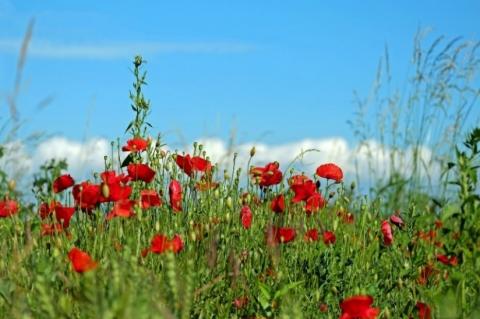 There is a pressing need to modify current farming practice to reduce environmental impacts, particularly in terms of biodiversity and soil health and function. This is likely to facilitate greater agro-ecosystem stability, which is essential in the context of managing pressures from future climate and environmental change. Increasing species richness in grassland is a potential solution to the problem of enhancing food production systems, whilst simultaneously delivering the necessary conservation measures to protect this ecosystem and the ecosystem services it provides.

Biomass productivity increases with plant species richness, both above and below ground. The positive relationship between plant species richness and productivity in grassland is the result of influences such as below-ground resource partitioning. This is typically accepted to mean that where species with different rooting strategies (put simply, those that have either shallow or deep roots) grow together in diverse communities, they target nutrients from different levels of the soil profile, and more comprehensively utilise available resources. In reality, the role of different plant rooting strategies is more complex, as even deep rooting plants will concentrate the majority of root biomass in the near surface layers. The major benefit therefore is likely to derive from the increased abundance of deep rooting species, as a function of increased plant species richness, which increases the average rooting depth of the community as a whole.

Grassland communities that host a mixture of plant species, with different life histories, fundamental niches, and morphologies, are better able to exploit the resources available within an ecosystem without suffering the negative effects associated with high rates of competition. In monocultures, where the community is composed of the same plant species all targeting the same resource opportunities, this can result in high rates of competition with implications for productivity potential. Furthermore, plants may alter the morphology of their roots to adapt to pressures such as variations in resource availability or neighbour plant proximity. The influence of complex communities on root morphology still requires much further research, however it is possible that the nature of competition between different species in complex communities may drive positive responses in terms of plant productivity.

Multi-species grassland swards may allow for reductions in the input of fertiliser and the intensity of management necessary to maintain current intensive grassland production, increasing farm business efficiency. Diverse grassland communities are typically resistant to invasion from non-seeded species. This stability may limit the need or frequency of ploughing and reseeding of leys.  Research has also shown that yields from Multi-species grasslands with low or no fertiliser input, are comparable to yields from low diversity, high fertiliser input systems. This represents the potential for efficiency gains in terms of reduced investment in fertiliser and labour, and reduced environmental impact.

Multi-species grasslands require less intensive management, which promotes greater soil health and function by limiting disturbance to soil in the form of tillage. Reducing or stopping tillage can improve soil characteristics and reduce production overheads. This may therefore be a more appropriate system for management to ensure the maintenance of soil health and function in the long term. Grassland plant communities with high diversity also have higher rates of nitrogen utilisation, which means lower nutrient losses through leaching, and thus reduced potential for pollution.

By increasing species richness in grassland it is also possible to 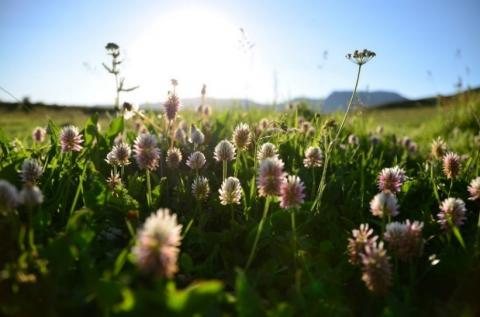 , in both soil and vegetation C pools. This is important in the context of climate change, as it may present an opportunity to restore or even enhance existing C reservoirs. In addition to this, where the economic value of C storage has been calculated, the provision of this ecosystem service has been shown to be of significant value. In grassland, increasing the amount of species from one to ten had twice the economic value of increasing the richness from one to two species. Whilst ecosystem services such as C sequestration are not currently valued financially in the UK, in the future there is the potential that this system may become the norm to ensure vital functions such as C storage are protected or enhanced. In such a scenario, improving species richness in grassland may offer a financially beneficial opportunity for UK farm businesses.

There is also benefits to be derived from the positive impact that species-rich grasslands can have on people. Species-rich meadows are considered to be aesthetically pleasing and can increase the perceived value of a landscape from a cultural or recreation perspective. This may offer opportunities for farm businesses to benefit from alternative revenue streams, such as those from eco-tourism.

The enhancement of species diversity in UK grasslands can offer a range of potential benefits, from better production to reduced environmental impact. Thus, if even a proportion of each farm were re-seeded with multi-species leys, the benefits derived, particularly in environmental terms, would be evident. In general, increasing the amount of different species (even if only by a few) is still likely to have positive effects in terms of improved management.

Much is yet unknown with regard to the potential of multi-species grasslands to compliment UK livestock production systems. For instance, there is great potential that compounds produced within diverse communities, such as tannins or other plant secondary metabolites, may reduce methane emissions from ruminant livestock or offer other potential production benefits. Further research is needed to investigate such possibilities, but as the evidence continues to grow, the case for moving towards cultivating multi-species swards becomes increasingly compelling.

Click here to read a PDF version of this article